Today marks the one-year anniversary of the Springboks’ memorable 32-12 victory over England in the International Stadium Yokohama in Japan, where Siya Kolisi and this Bok colleagues became the third Springbok team to lift the coveted Webb Ellis Cup.

The victory in Tokyo capped a memorable year for the Springboks, who were also crowned as the 2019 Castle Lager Rugby Championship winners, while the South African rugby team were also awarded with the prestigious 2019 Laureus Team of the Year Award in Monaco.

Mr Alexander praised Rassie Erasmus (Director of Rugby), his coaching staff and the entire squad for the amount of joy they brought to the people of South Africa by bringing the RWC trophy home.

“That magnificent victory once more showed that sport can be a great tool for social cohesion in our country,” said Mr Alexander.

“The past year was obviously a difficult year because of the pandemic, but next year we are in for a bumper rugby year when the Boks will play against the best of the UK and Ireland.

“I have no doubt they will continue to make this nation very proud with their performances on the field. On behalf of the South African rugby fraternity, I want to say once more thank you to the Springboks for inspiring so many of our people.” 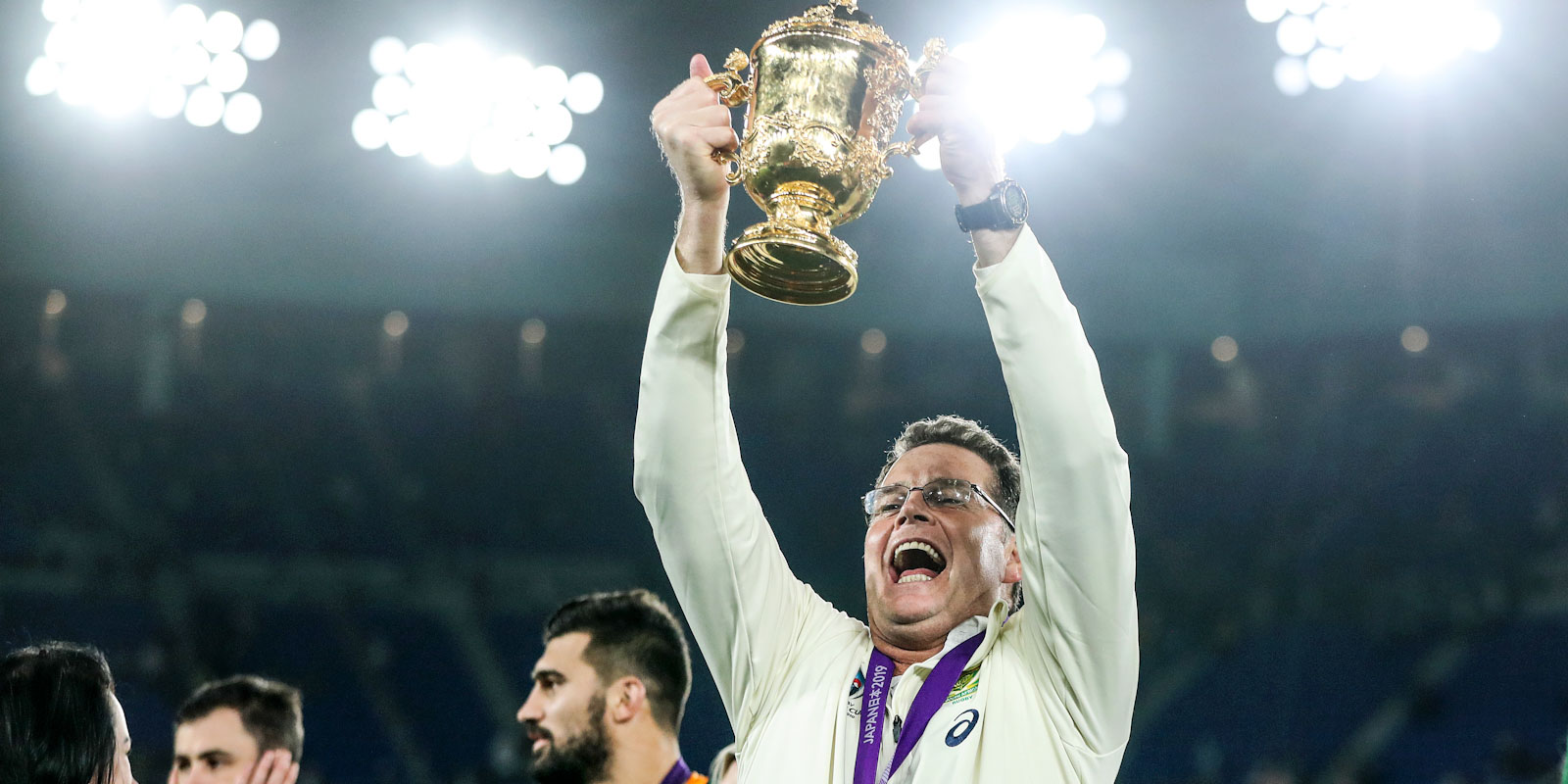 Erasmus said every member of the squad that went to Japan deserves tremendous credit for their wonderful achievement.

“It was a full-on team effort, from players to coaches and management staff – they all worked incredibly hard and made many sacrifices to make that success a reality,” said Erasmus.

Erasmus said that looking back one year later, he is still amazed at the huge impact the victory had on all South Africans.

“It’s astonishing, really. I will never forget the amazing welcome scenes at the airport, or the many thousands of people that came out to share in the team’s joy during the victory parades.

“And, one year later, people still say how they enjoyed the win and how proud they are of that achievement,” added Erasmus. 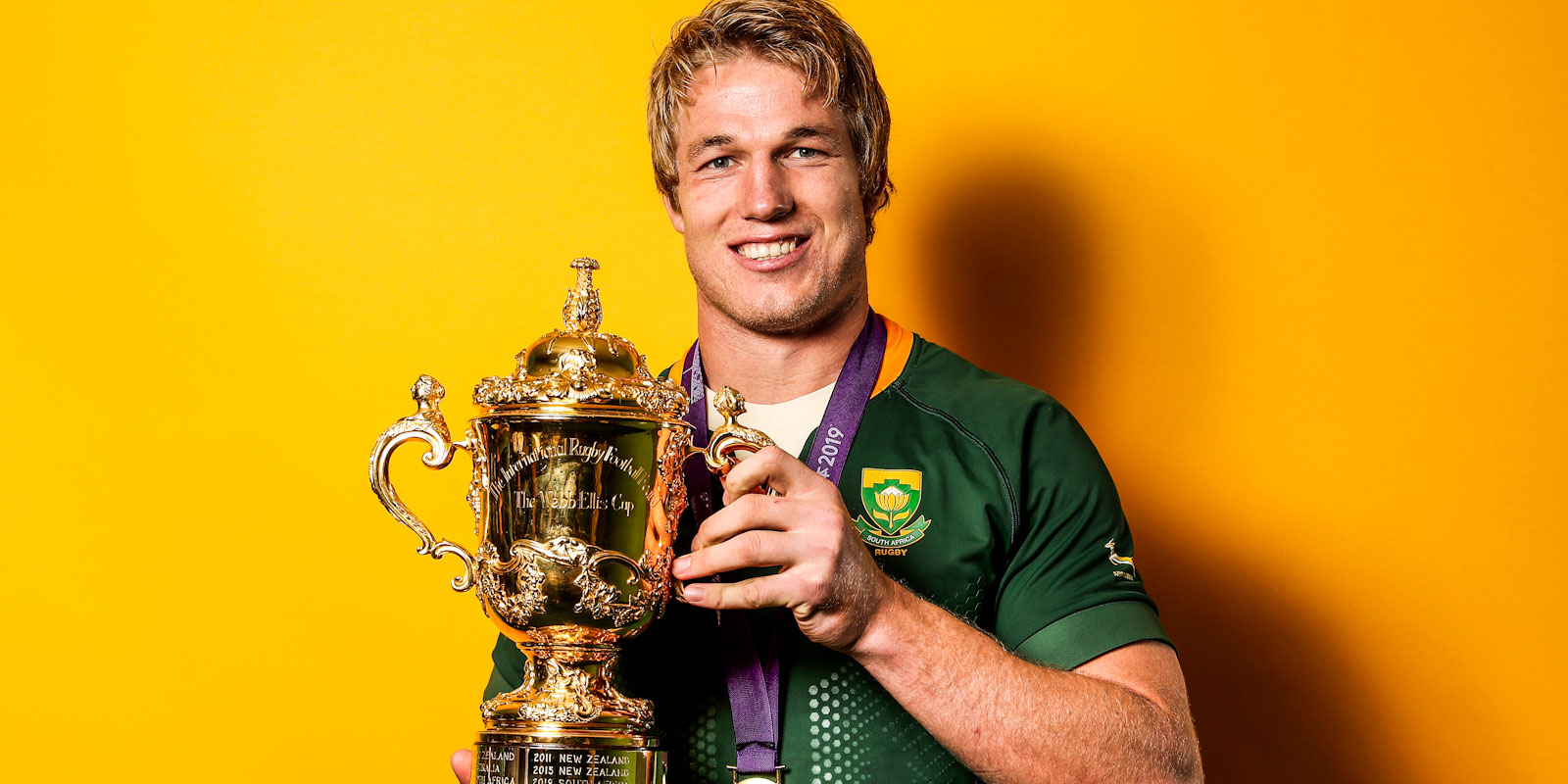 Pieter-Steph du Toit scooped the World Rugby and SA Rugby Player of the Year Awards for 2019 with a string of stellar performances and described the triumph in Japan as the highlight of his rugby career.

“Looking back, one year later, you now truly appreciate how unbelievable it was to be part of the Springbok team to play in Japan,” said Du Toit.

“To be able to play in the Final and then win the Webb Ellis Cup was a dream came true, really. The celebrations afterwards were special, and I was very lucky to have my wife and baby boy with me, so that made it extra special.

“We had a team talk afterwards at the hotel and the families were also part of that, so that was amazing. The celebrations afterwards meant it was one of the best nights of my life!” 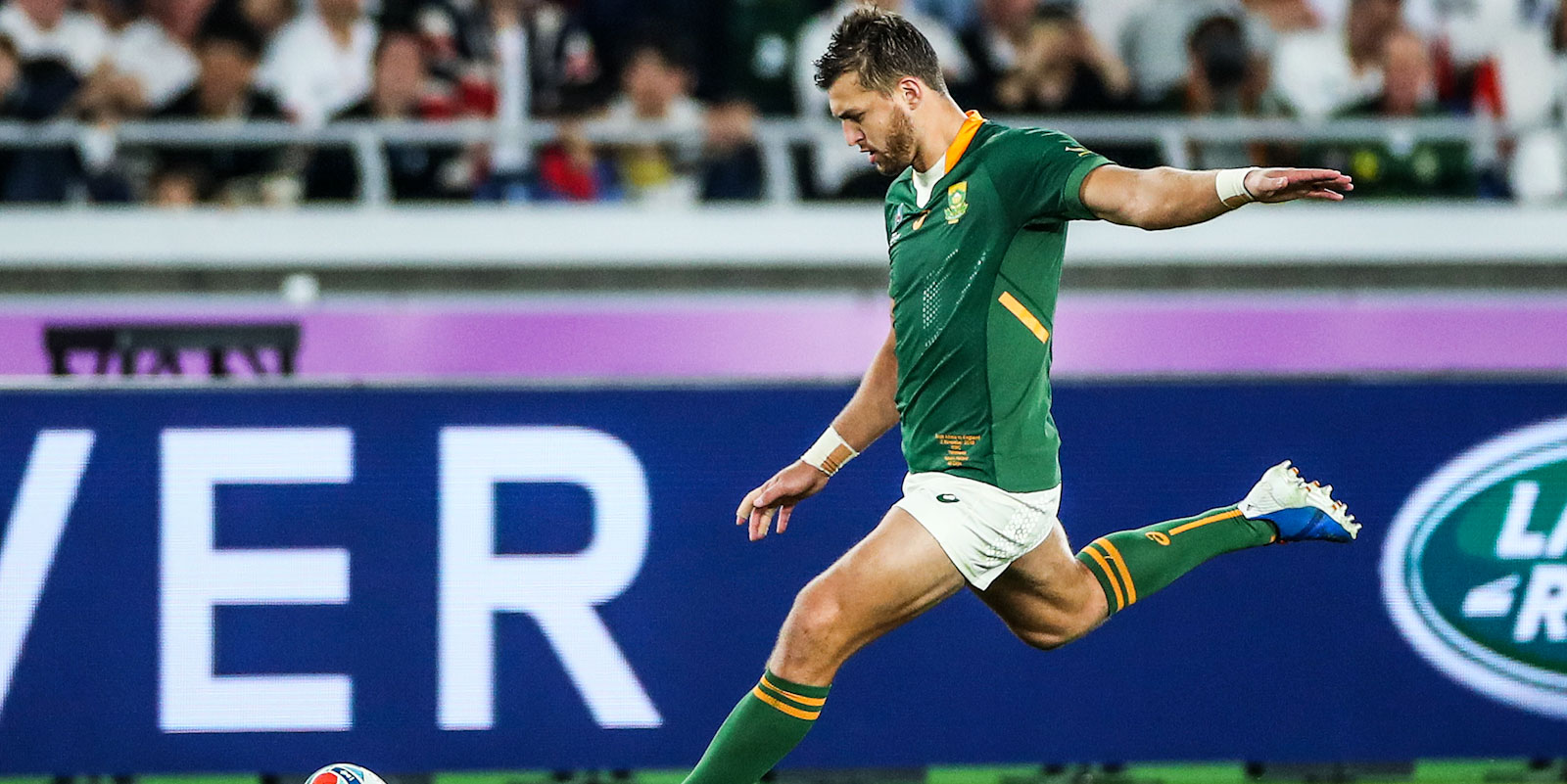 Handré Pollard was also one of the Bok heroes of that comprehensive victory over England, who were considered the favourites for the world title. The Springbok flyhalf scored 22 points with six penalty goals and two conversions.

“It’s been a crazy 2020, really, with everything that has happened with pandemic,” said Pollard.

“But I am sure the RWC win is still something that make people look back with many happy memories.

“The Final was obviously the highlight of the tournament. The celebrations afterwards at the hotel, the travel back to SA and then that amazing victory tour on the bus to show the trophy to the people are all truly amazing memories.”

The RWC tournament also brought the curtain down on the careers of a trio of very experienced Springboks, namely Tendai Mtawarira, Francois Louw and Schalk Brits. Louw, who is still based in England where he has started with the next chapter in his life, said: “To walk off that field as world champions is hands down the greatest moment of my rugby career.

“What a celebration afterwards, simply electric from the moment we got back into our team hotel in Tokyo all the way to South Africa. Experiencing those moments with the fans is something that I will cherish for the rest of my life,” added Louw.

Mtawarira has ventured into business since his retirement and is studying full-time for his MBA following a short and COVID-19 interrupted club rugby stint in the USA.

“I played in two previous RWC tournaments and to eventually to lift the Webb Ellis Cup in my final Test, wow, I can’t even put it into words,” said the former Bok front ranker.

“That victory stood for so much more than just rugby, so many people from so many different backgrounds and cultures – we showed that when you come together and buy into a plan and work towards a common goal, that you can achieve greatness.

“It’s still an unbelievable feeling and for me, viewing Chasing the Sun series is so incredible to watch because it brings back so many happy memories.” 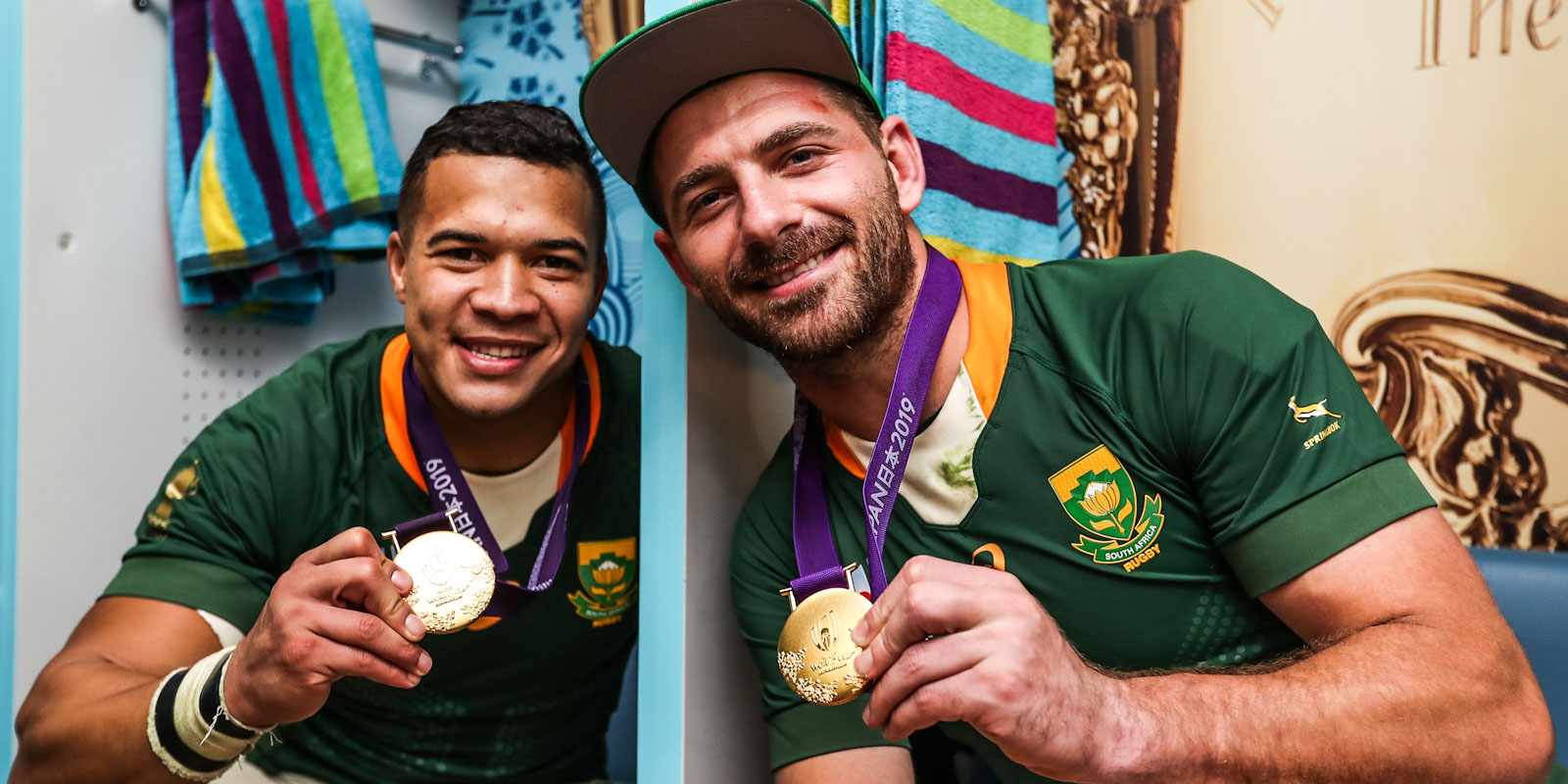 Willie le Roux was also one of the Bok heroes in Japan, where he courageously played in the knock-out stages despite hurting his shoulder in the quarter-final victory over hosts, Japan.

He also said that “Chasing the Sun”, the five-part DSTV documentary showcasing the Springboks’ RWC victory, has brought back a flood of memories.

“Growing up as a boy in South Africa that is all you want to do, to play rugby and win the Rugby World Cup,” said Le Roux.

“The Final went by so fast and the documentary series, as well as the replays of the Final, gave me chance to look back and truly appreciate the massive occasion. The fans were unbelievable when we came back, and I am so grateful to be a part of such a great success story.” 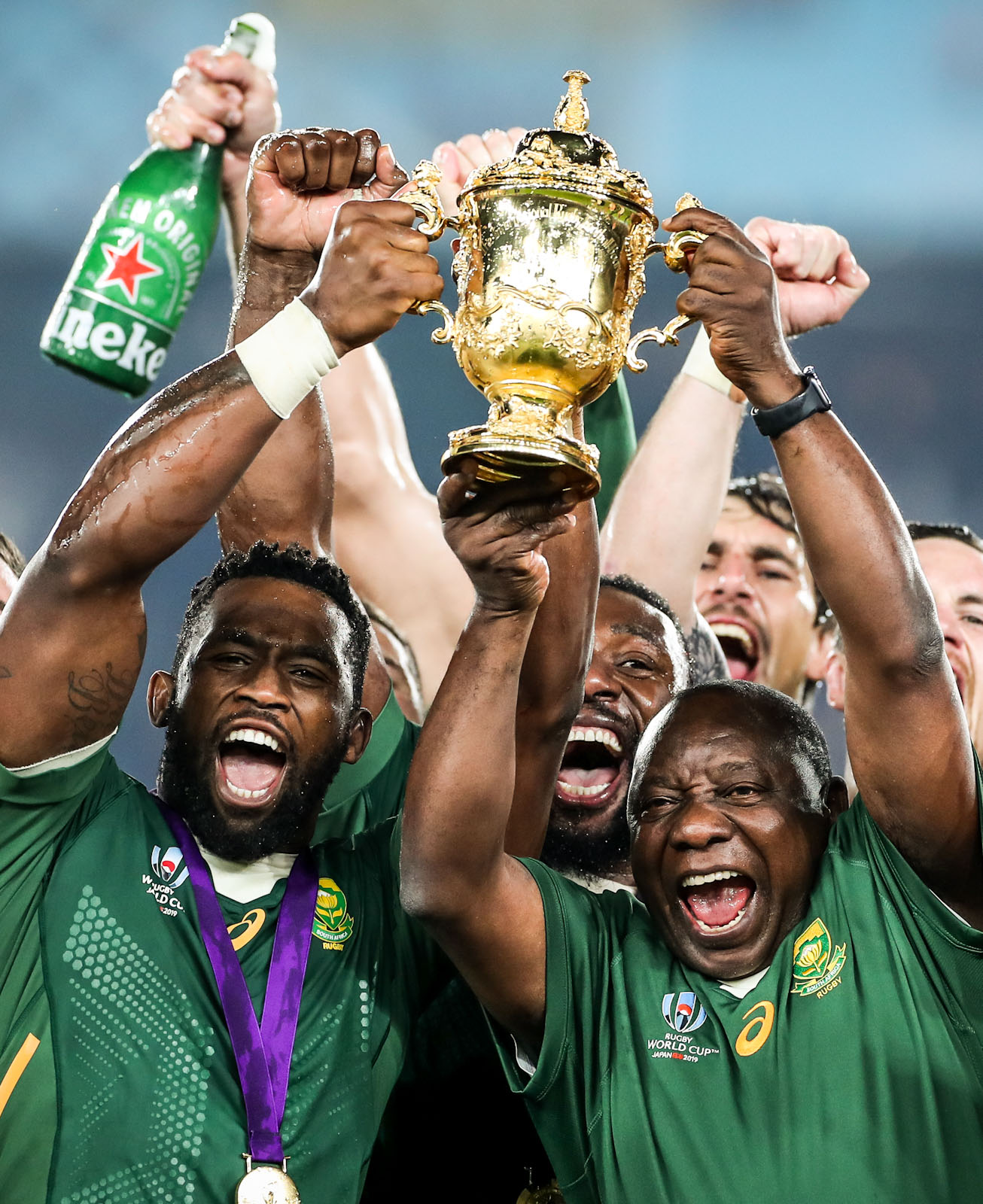 A stellar 2019 Springbok year saw Rassie Erasmus named as Coach of the Year, the Springboks crowned as Team of the Year and Pieter-Steph du Toit named as World Player of the Year.

The World Rugby Awards were rich reward for a year in which the Springboks completed the unprecedented double of winning both the Rugby World Cup and the Castle Lager Rugby Championship in the same season.

The team finished the year at No 1 in the world rankings, for the first time since 2009.

The Springboks won 10 out of 12 tests, scoring 424 points and 52 tries and conceding only 138 points and 10 tries – only four of them in seven matches at the Rugby World Cup.

Statistically, it was the most successful Springbok season since 1998 when the team was in the middle of a 17-match winning streak.

It was the first time South Africa had won any of the top three awards since 2009.

Munster moved 11 points clear of the Scarlets in Conference B of the Guinness PRO14 on Monday after extending their winn...

Champion beer on board as Carling Currie Cup is announced

The Cup of Champions has partnered with South Africa’s champion beer in a bold, new agreement that will see the world’s oldest provincial rugby competition officially become the Carling Currie Cup for the next three seasons.