The triumph was a successful homecoming for the Joburg home side who took any sniff of victory away from the plucky visitors with two quick tries at the end. After scoring only three points in a disappointing first half display, the Kimberley side gave a far better account of themselves in the second half to score four converted tries.

Emirates Lions outside centre Wandisile Simelane gave an impression display in midfield and the No 13 had a hand in three of his team’s four first-half tries. He capped an outstanding performance with a fine solo try deep in the second half. Skipper and flyhalf Elton Jantjies was equally impressive with his ball contribution and kicking off the tee, which saw him missing only one of his nine conversions attempts.

Four converted tries gave the home side a handy lead at halftime, while the team from Griquas could only answer with a single penalty goal which saw them trailing 28-3 at the break.

However, the visiting team reduced their number of unforced errors in the second half which led to a much-improved showing after the break, resulting in a competitive spell of a reward of four converted tries.

The Emirates Lions made the most of the home advantage in the first half and they were aided by the visiting team who managed to get a man yellow carded with barely two minutes of play on the clock when flanker Stefan Willemse was sent to the bin for ten minutes. 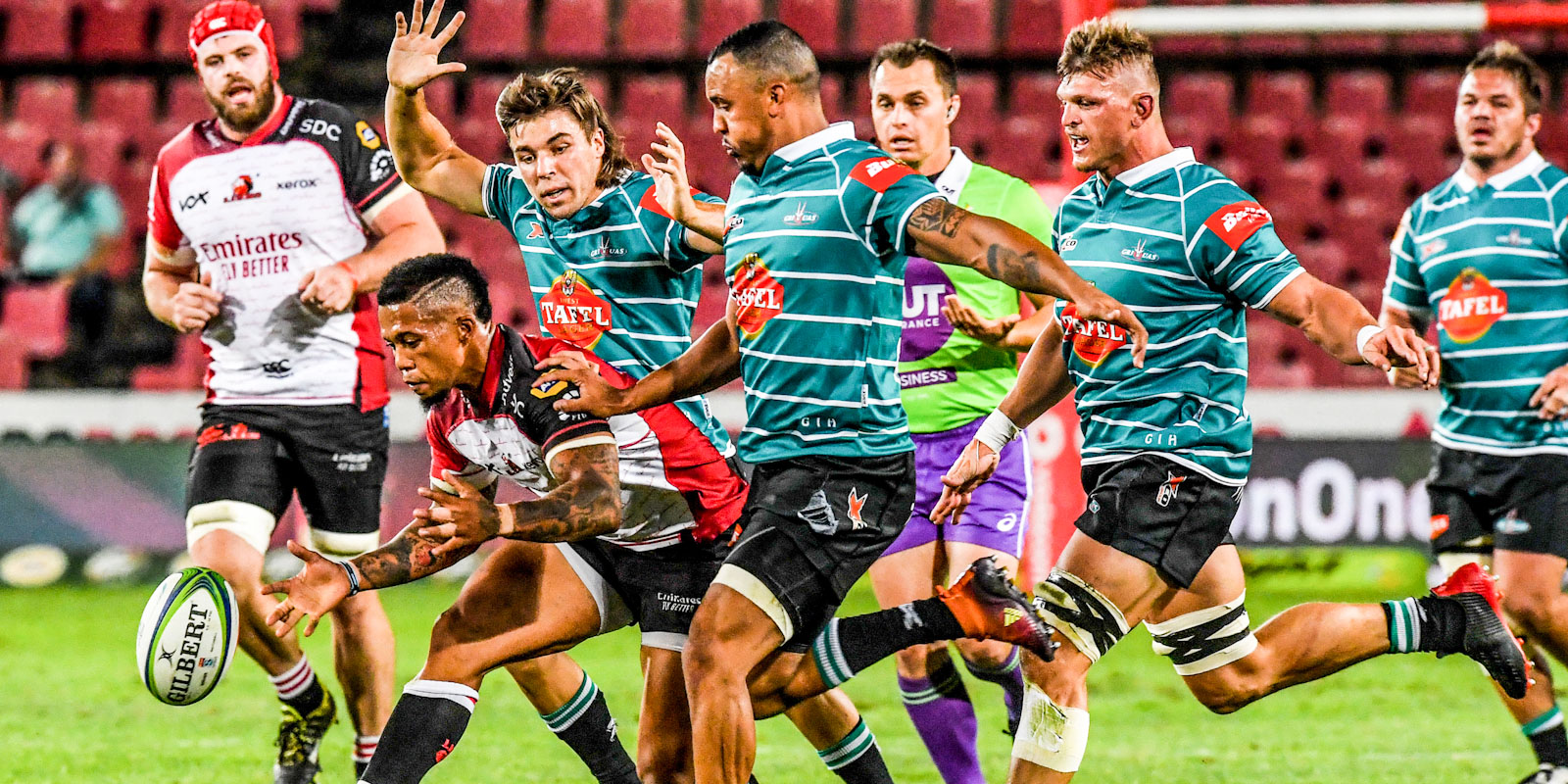 The home side made the most of their numerical advantage when Simelane and Gianni Lombard combined well to send Courtnall Skosan over for the first try of the match, easily converted by Jantjies.

Barely five minutes later Simelane was again the initiator of an attacking move which resulted in an easy run in for midfield partner Dan Kriel for their second converted try of the half.

The visitors did their best to claw their way back and made some impressive inroads, but several promising attacks were halted because of unforced handling errors as well as a heavy penalty count against them.

Jantjies, meanwhile, made sure his team keep up their attacking intent with some quick ball to his outside backs, where Simelane was especially prominent.

The outside centre was also on hand to assist Skosan for his second try from broken play, while Jantjies added the extras with his third successful conversion of the opening half. He was also the main provider in the last movement of the game which saw him offload a lovely pass in the tackle to Stean Pienaar who scored out wide.

Jantjies swept his fourth consecutive conversion kick over, this time from an acute angle, to hand his team a handy and thoroughly deserved 28-3 lead at the halftime whistle.

The second half was just as exciting, with the preparing to attack from deep rather than testing each other with a kicking game. Both sides employed the maul to give effect, which yielded tries on both sides for their driving efforts. 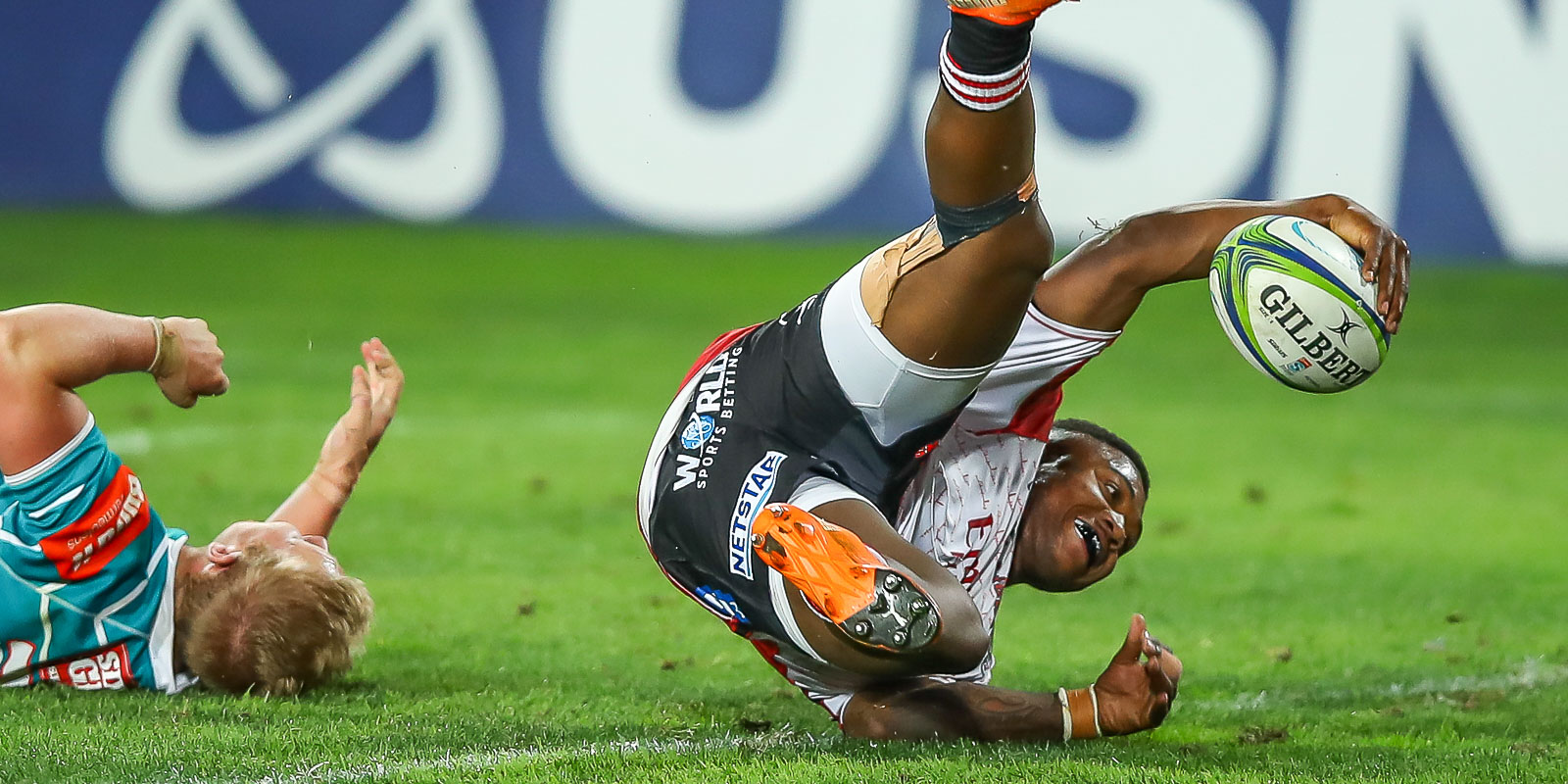 It was a far better and more clinical performance from the Kimberley outfit as they matched the home side’s two converted tries with the same tally in the opening quarter of the second stanza. Loose forward MJ Pelser and hooker Jaco Visagie each scored a try from a Lions’ driving maul, both converted by the on-form Jantjies.

Scrumhalf Zak Burger dummied his way over the line for the visitors first try, and he was followed over the line by Hendrik Luus (hooker), while Whitehead converted both the tries to bring the scores to 42-17 in favour of the home team.

However, the Peacock Blue jerseys refused to give up the fight and scored two more tries through a clever catch and run effort from lanky fullback James Verity-Amm and replacement flyhalf Tinus de Beer. Whitehead’s conversions took the score to 49-31 after Simelane had scored his fine solo effort.

However, the home side was able to cruise to a convincing win in the end thanks to further tries from Skosan and replacement Reinhard Nothnagel.