The second place was due to defeat against the USA in the last play of their final pool match on Saturday, which not only snapped the Blitzboks’ unbeaten run of 36 matches leading up to the match, but the 12-7 defeat also ended an eight-game losing streak to South Africa for the USA.

Springbok Sevens coach, Neil Powell, was not happy about the overall performance of the day.

“We always knew that we would lose somewhere along the road, it was going to happen sometime or another,” said Powell.

“We never managed more than two phases on attack and when you concede so much possession as we did against a team that is so effective on the counter attack as the USA, you will be in trouble. We learned that lesson today.”

Powell said the squad will have time to reflect on their shortcomings on the opening day and will have to come back stronger in the morning: “We did not play as well as we could and never really got going. So tomorrow's focus would be on ourselves and not Fiji.”

In the USA game, the Blitzboks hardly fired a shot in the first half. They conceded a number of penalties that allowed the Americans to kick into the corners and dominate field position. It was only a matter of time for that dominance to pay off and David Still, who easily bumped off a would-be tackler to score their first try, converted by Lucas Lacamp. That was also the only points of the half.

The second half continued in the same vein of conceding penalties, but improved handling saw the Blitzboks putting Ryan Oosthuizen over in the corner. Dewald Human kicked a superb conversion to draw scores level at 7-7 with a minute left to play.

However, the USA managed to get themselves into good field position and when Perry Baker was put in space, the speedster managed to score the match-winning try in the 15th minute of the match and with the clock in the red.

Earlier in pool play, the Blitzboks outplayed Kenya by four tries for their second successive win, which was also their 36th consecutive victory on the HSBC World Rugby Sevens Series.

Three of those tries came in the opening four minutes of the match, with the South Africans delivering a clinical display of sevens rugby that left their African counterparts stunned. 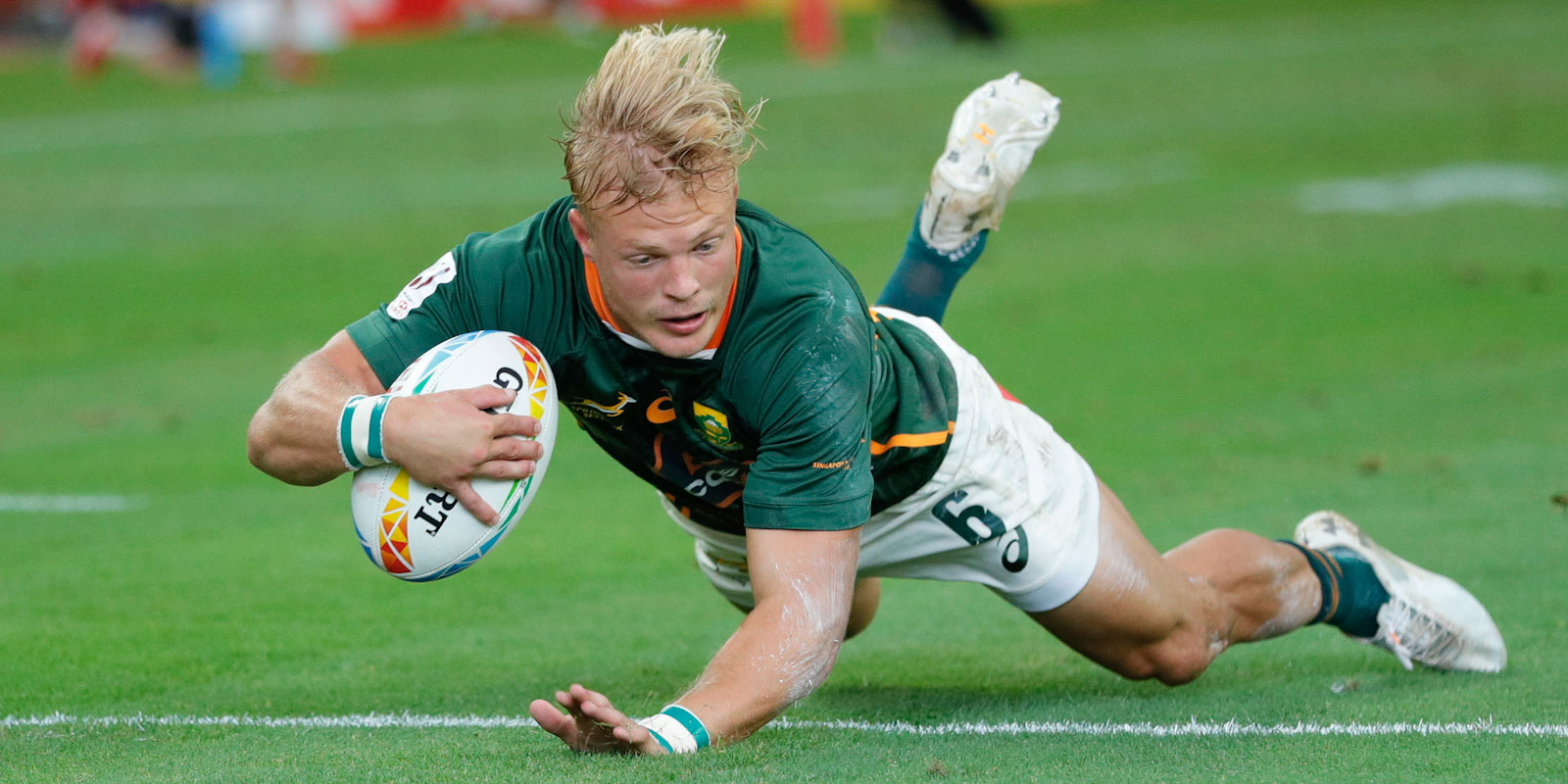 Sako Makata, who went on to record his first hat-trick in the Blitzbok jersey, scored in the opening minute and from the restart Selvyn Davids scored. Makata was at it again a minute later and at 19-0, the lead was significant.

“It was great scoring three, but with guys like Selvyn on your inside, these things are possible,” Makata said.

The second half saw that lead extended when Makata got his third, this time going over in the corner after good build-ups to extend the lead to 26-0. Credit though to Kenya, who kept on coming back and they managed a try with the hooter going when Alvi Marube raced 70 meters to score.

The Blitzboks started the defence of their title on a winning note, beating Canada 31-5. It was a slow start for the South Africans though, as they fluffed an early scoring opportunity before allowing Canada's David Richard to race away for the opening try.

Ronald Brown instigated some structured play into their attack though, with two delightful foot passes finding JC Pretorius and Siviwe Soyizwapi in short succession to have his team 12-5 up at the break.

The second half was a better one for the Blitzboks, as they finished off some good tries, while keeping Canada out of the danger zone. Darren Adonis scored soon after he joined off the bench and two late tries, both converted by Dewald Human, eased the South Africans home.

They face Fiji at 06h50 (SA time) on Sunday. Australia and Argentina will clash in the first quarter-final (06h28) before New Zealand and Samoa (07h12) and USA and Ireland (07h34) will also battle for a place in the last four.

South Africa will host two key local Vodacom United Rugby Championship derbies on Saturday which could have a big bearing on the final standings of the domestic sides as the scramble for playoff places reaches a peak, with only four weeks of round-robin matches remaining.

Blitzboks as ready as they can be – Powell

The Springbok Sevens team hit the ground running in Singapore this week – in a practical sense as well as part of their strategy for the HSBC Singapore Sevens that starts at their National Stadium on Saturday, with the players doing some extra work early in the week in order to combat aspects such as jet lag, time differences and humidity.

Lionel Mapoe will make a return to the Vodacom Bulls’ starting XV in the only change to the team’s starting lineup for their Vodacom United Rugby Championship clash against DHL Stormers in Cape Town on Saturday.

Martin Anayi, CEO of the Vodacom United Rugby Championship, has paid glowing tribute to the South African rugby market, adding that the way the country’s biggest brands and the four big teams engage with their fans is exactly the model the new competition is striving to perfect.

The sight of the Springbok Sevens team not finishing on the podium of any tournament they contest is rare, even more so when they lose three HSBC World Rugby Sevens Series matches in a row, which is what happened in Singapore this weekend.

Springbok coach Jacques Nienaber expressed his excitement on Sunday as the national team kicked off their preparations for the season with their first alignment in Durban, and said the camps were vital as they look ahead to a challenging international season.