The close loss against Fiji meant that the Blitzboks failed to get into the Cup semi-finals for first time in 12 tournaments, and coupled with last night's pool defeat to the USA, they lost three matches in a row for the first time since 2020.

The Blitzboks are still top of the log after winning the opening four tournaments of the 2022 HSBC World Rugby Sevens Series.

Against Argentina, two yellow cards proved costly to the Blitzboks, who started the day without the services of the injured Sako Makata and Lubabalo Dobela.

On both occasions the Los Pumas capitalised on the extra player on the field and scored tries, making the Blitzboks' comeback even harder.

Argentina jumped into an early 7-0 lead when Gaston Revol stepped inside an over tracking defence and when Selvyn Davids was binned for a high tackle, Augustin Fraga was the beneficiary of the South Americans' higher numbers, his try giving them a 12-0 lead.

The Blitzboks came back with a well-worked try that saw JC Pretorius dot down to give them something to play for in the second half.

Selvyn Davids scored a try in the second half to cut the lead to two points, but when Ryan Oosthuizen was sin-binned, Fraga got a second to extend the lead again.

With a minute left, World Rugby's Sevens Player of the Year, Marcos Moneta stepped around a number of defenders to score and although Impi Visser got one back in the final play of the match, that was it for the Blitzboks and their Singapore defence. 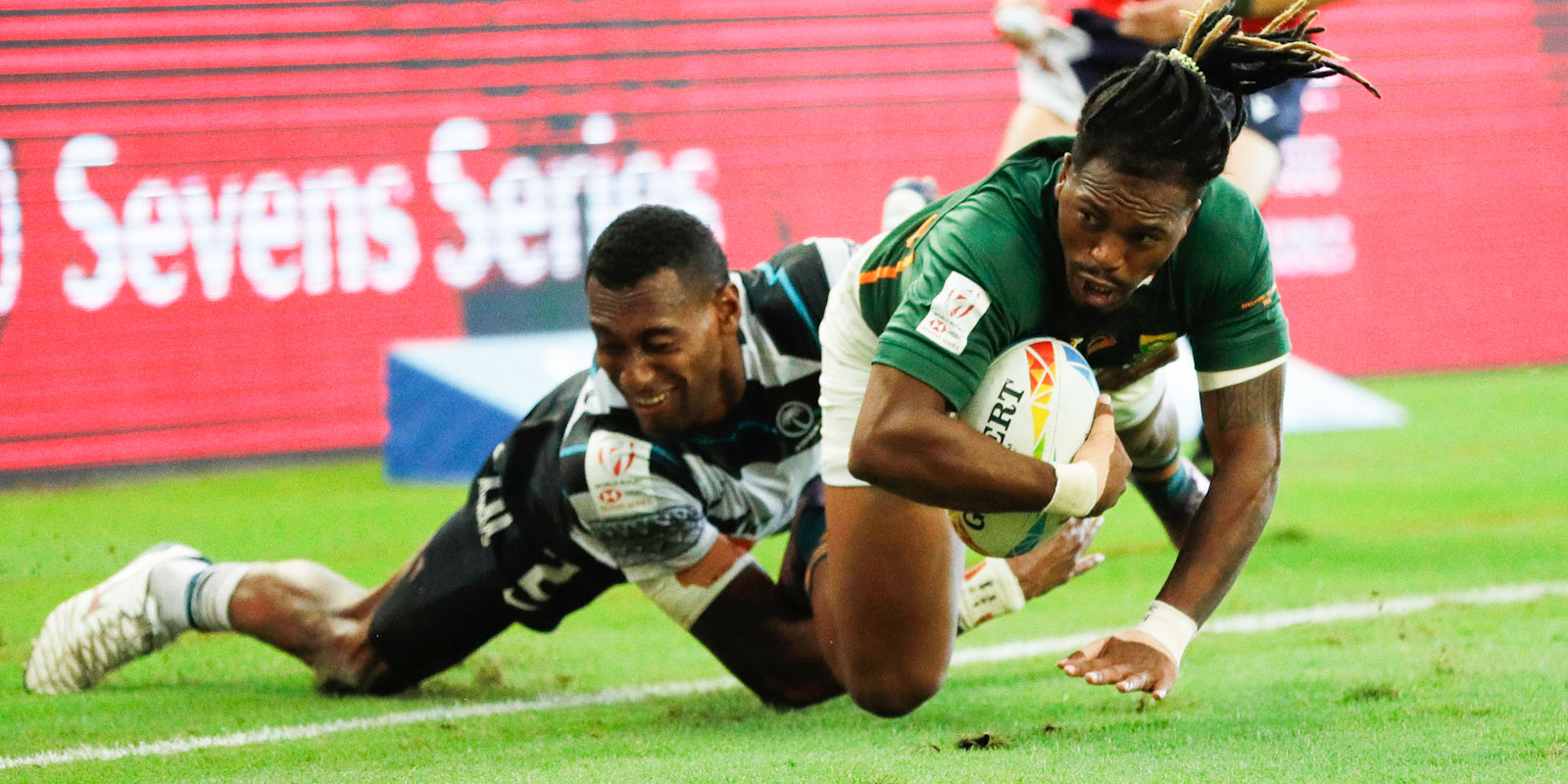 Darren Adonis stopped on the corner flag against Fiji.

Earlier on Sunday, the Blitzboks came desperately close to overhaul Fiji, but dropped a close 19-14 result which knocked the South African side out of a podium finish.

The Blitzboks only had themselves to blame. They conceded easy tries against Fiji, who scored in the third and fourth minutes to jump into a 12-0 lead, and again in the first minute of the second half after some confusion amongst the  SA defenders.

Zain Davids scored just before the break to cut the Fijian lead to 12-7, but with the early second half try, the men from the South Pacific extended their lead back to 12 point at 19-7.

Credit to the Blitzboks, who not only scored another converted try via Siviwe Soyizwapi, but in the final play of the match, worked Darren Adonis over in the corner. The TMO ruled that he was tackled into touch before grounding the ball and the opportunity and match was lost.

The DHL Stormers held out a determined Vodacom Bulls outfit with 14 men in the dying minutes of their Vodacom United Rugby Championship clash at the DHL Stadium in Cape Town on Saturday to secure a crucial 19-17 victory in this North-South showpiece.

Sharks take the spoils in a soaking wet Durban

The Cell C Sharks moved up to sixth place on the Vodacom United Rugby Championship log courtesy of a 37-10 bonus-point win over the Emirates Lions in a game that was played in wet and difficult conditions at Hollywoodbets Kings Park in Durban on Saturday afternoon.

South Africa will host two key local Vodacom United Rugby Championship derbies on Saturday which could have a big bearing on the final standings of the domestic sides as the scramble for playoff places reaches a peak, with only four weeks of round-robin matches remaining.

Bulls to host WP in SA Rugby U20 Cup Final

The Vodacom Bulls will host their DHL Western Province counterparts in the final of the 2022 SA Rugby Under-20 Cup competition at Loftus Versfeld in Pretoria, following their 78-3 away victory over Eastern Province U20 last Saturday.

Mr Mark Alexander, President of SA Rugby, expressed his condolences to the family, friends and team-mates of Liyabona Teyise, a pupil and first team rugby player at Dale College in King William’s Town in the Eastern Cape, who sadly passed away over the weekend following an injury sustained during a match.

Springbok coach Jacques Nienaber expressed his satisfaction as a group of players wrapped up their first alignment camp in Durban on Tuesday, saying they achieved the goals set out as they step up preparations for the international season which starts with the Castle Lager Incoming Series against Wales in July.

The FNB Varsity Cup semi-final lineup has been confirmed with UFS Shimlas set to host UP-Tuks in Bloemfontein, and the UCT Ikeys pitted against Western Cape rivals Maties in Cape Town, with both matches scheduled for next Monday.