The Boks kicked off their preparations for Saturday’s opening Test against Argentina in Nelson Mandela Bay and assistant coach Deon Davids praised the level of professionalism among the players and team management with a quick turnaround from the Castle Lager Lions Series to the Rugby Championship.

Davids said the focus within the camp was now solely on Saturday’s Test against Argentina – the Boks’ first against Los Pumas in two years. These sentiments were echoed by Bok hooker Malcolm Marx.

The Boks returned to the training field on Monday for the first of two back-to-back Tests in the Nelson Mandela Bay Stadium before travelling to Australasia for the away-leg of the competition.

“We really enjoyed winning the series against the British & Irish Lions and we celebrated the win on Saturday night, but with the level of professionalism in the squad we were able to quickly shift our focus to the next task,” said Davids.

“We started full-out on the Rugby Championship preparations today (on Monday) and went through what we can expect from Argentina, so this is a normal Test week for us, and we’ll prepare accordingly.

“The players understand the importance of going into this competition. We are the defending champions, and we’d like to retain the title.

“So, it not a matter of motivating the team. They want to do well and win the competition, and the players are ready and have the right mindset going into the tournament.”

Marx agreed with Davids’ sentiments about making the transition from the Lions Series to the Castle Lager Rugby Championship. 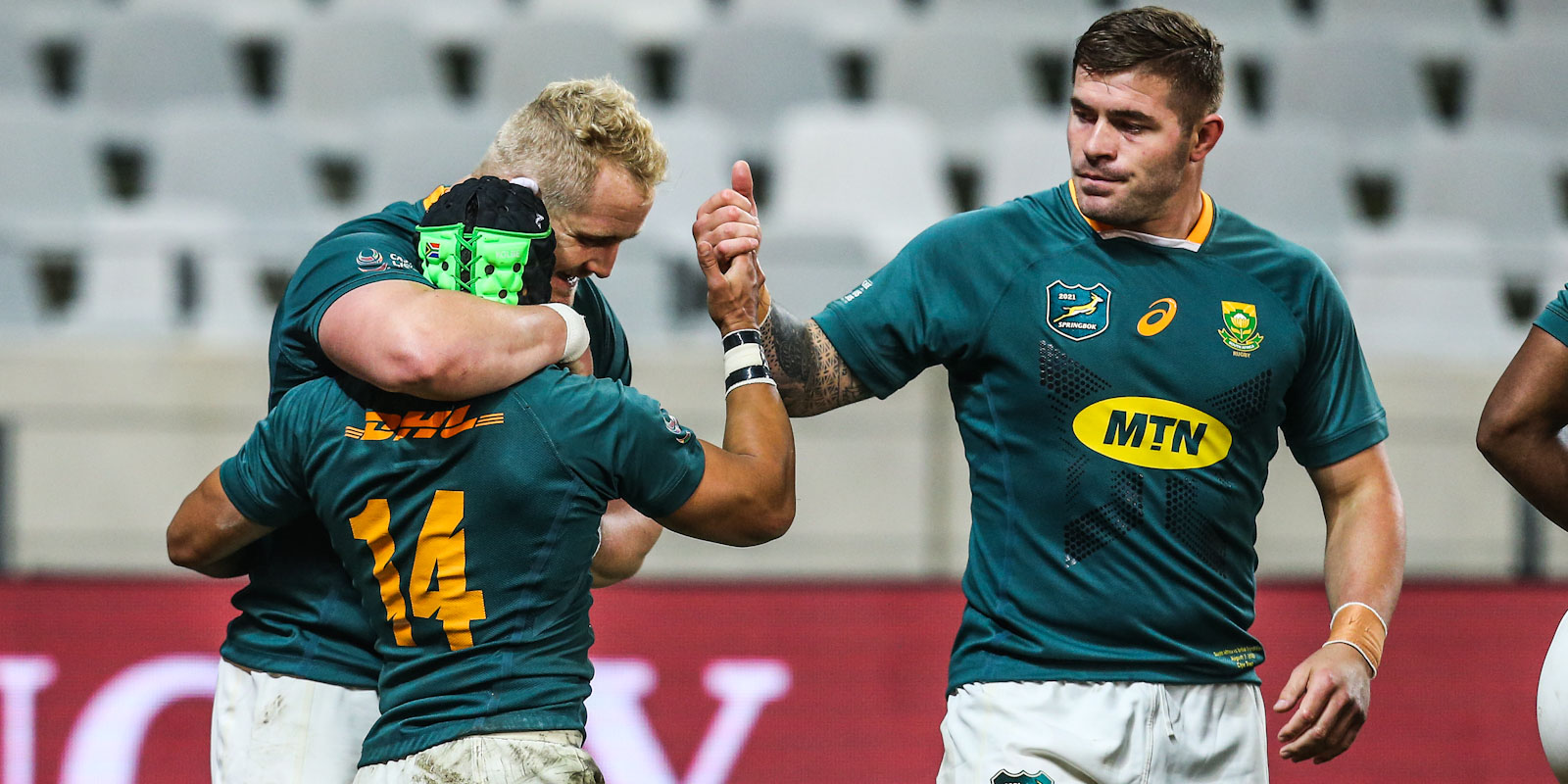 Malcolm Marx (right) and Vincent Koch congratulate Cheslin Kolbe with his try in the third Test.

“It was an amazing feeling and an unbelievable experience for us as a team and for the country to win the Castle Lager Lions Series, but we need to move onto the next competition, so our focus now is on the first Test against Argentina,” said the Bok hooker.

“There are a few sore bodies as there usually is after any Test match, but we have to keep going and we are looking forward to the next challenge.”

Springbok head coach Jacques Nienaber will name his team to face Argentina on Tuesday, and Davids said the coaching staff will consider a number of factors as they finalise the match-23.

“We are only one-third into our season, and we are making the switch from a very competitive Lions Series into another testing competition,” said Davids.

“We’ll take into consideration the players’ performances, work load, injuries, as well as our player rotation system when we make the final decision on the team that will play this weekend.”

With four Test matches under the belt – including the season-opening Test against Georgia early in July – Davids lauded the development of the Bok pack as a unit.

“I’m very proud of the players’ performances – it was a tough series against the Lions, and we were competitive up-front,” said Davids.

“We grew as a pack of forwards from the first Test against Georgia, and there has been a constant attempt to improve ourselves.

“The experience in the squad definitely counted and it was great to see those players assist the younger players. As a group it was fantastic to achieve what we did, and it was very satisfying.”

Relive the action from the Lions Series decider

It was a humdinger of note, but in the end the Springboks did enough to secure victory in the third and final Test in the Castle Lager Lions Series.

The Springboks arrived in Nelson Mandela Bay on Sunday with their focus set firmly on the Castle Lager Rugby Championship against Argentina, Australia and New Zealand.

It was a proper try-fest in the Carling Currie Cup Premier Division this weekend, with 28 five-pointers scored in three matches, indicating a clear attacking mindset amongst the six teams in action in Kimberley, Durban and Cape Town.

SA Rugby announced a ground-breaking new partnership with Betway South Africa, which will see Betway become an associate sponsor of the governing body and the Springboks for the next three years.