Steyn and Etzebeth were the two most experienced members of the squad and while the big lock was excellent over the series of three Tests, the Bok pivot turned back the clock to slot the winning penalty goal, just like he did 12 years ago against the Lions.

It was a proper case of déjà vu for Steyn - who played in his 67th Test - when he repeated his antics off the bench in 2009 at Loftus Versfeld, to land the series-winning penalty goal after the scores were tied in the dying minutes.

The third and final Test against the British & Irish Lions was an epic affair, with the teams drawing level at 16-16 in the 74th minute, but the calm and collected Steyn slotted a penalty goal with less than two minutes to play to seal victory with back-to-back wins after going down 22-17 in the opening Test.

“To be part of this this series 12 years later and to kick the final penalty from almost from the same position was special,” said Steyn.

“It was a great day for South African rugby. It’s been a while since 2009, so I can’t remember all the details. But it was exactly the same situation with the scores level and we had to get the winning kick to win the series.

“That kick (in 2009) was about 54m and this one closer to 25m. But one puts in the hard work in the week to win games like these and I’m grateful for this opportunity again.”

Steyn’s appearance in the Test marked his first in the green and gold since 2016, and while he may be 37 years old, he said he said playing for the Boks remained a special feeling.

“I came back (to South Africa) after six years in France and I didn’t expect to play for the Springboks again,” said Steyn.

“At the Bulls I had the opportunity to play in the Carling Currie Cup. But as long as I can play for the Boks I’ll always available.”

Etzebeth, who ran out in his 89th Test which makes him the most experienced member of the current Bok squad, said he expected the third and final Test to come down to the wire as both sides were equally determined to seal the momentous series win.

“The first Test was tough and we had to come back in the second game - we knew the third Test would be a close contest,” said Etzebeth.

“In fact, I had breakfast with Morne (on Saturday) and I told him it may come down to him winning the series again.”

Etzebeth added: “This is a once in a lifetime opportunity and to be part of this moment is special.”

The physical lock admitted that while the team enjoyed the victory on Saturday, they would waste no time turning their attention to the Castle Lager Rugby Championship, which gets underway next week Saturday with back-to-back Tests against Argentina in Nelson Mandela Bay.

“The Rugby World Cup is still the pinnacle, but winning a series against the British & Irish Lions certainly is second to that,” said Etzebeth.

“This is a once in a lifetime opportunity and it was massive for us. We had a lot of struggles in the build- up to the series with a few COVID-19 cases interrupting the team, so we’ll enjoy the win and then focus on the match against Argentina.

“We will go into that game hungry and prepared and we’ll work hard on the field from Monday and prepare properly for that match.” 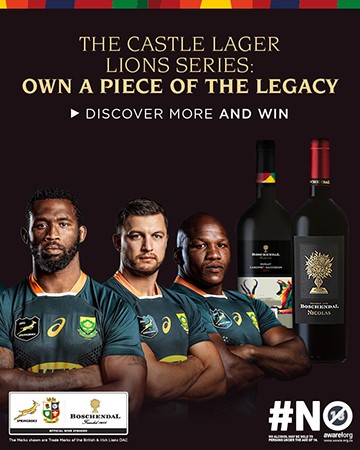 U20 Cup: First round wins for Sharks, Leopards and Lions

The Cell C Sharks Under-20s are top of the log after an entertaining opening round of the SA Rugby Under-20 Cup, which started last weekend.