The Boks held a 19-9 lead at the break and dominated the second half against a plucky and determined Georgia, who managed to test the South Africans' resolve, patience and discipline throughout the first Test for the home side since their Rugby World Cup win in Japan in November 2019.

Six tries to none tells one story, the hosts' ability to stay patient and keeping up their work rate till the final whistle another.

Nienaber continued the bomb squad option utilised by predecessor Rassie Erasmus and it rewarded the new coach as well, especially in the front row where a perceived strong point for the visitors were nullified by the six Springbok front rankers, each adding to the weary legs the Georgians were suffering as the match continued.

Make no mistake, the visitors certainly showed why they were a regular World Cup participant and had the Springboks under pressure in the opening 20 minutes and at once stage enjoying a 9-5 lead.

The much anticipated first scrum resulted in a penalty against the Springboks. Referee Mike Adamson pinged Trevor Nyakane for slipping his bind and Tedo Abzhandadze made no mistake from a relative easy angle to give his team a 3-0 lead.

The first lineout of the match had another points-scoring result. This time though it was the Springboks who got possession and through a number of carries and a slick backline move saw Aphelele Fassi running in. The debutant left wing was put in space, but after his first touch in Test rugby still had two defender and the TMO approval to beat before he could celebrate. 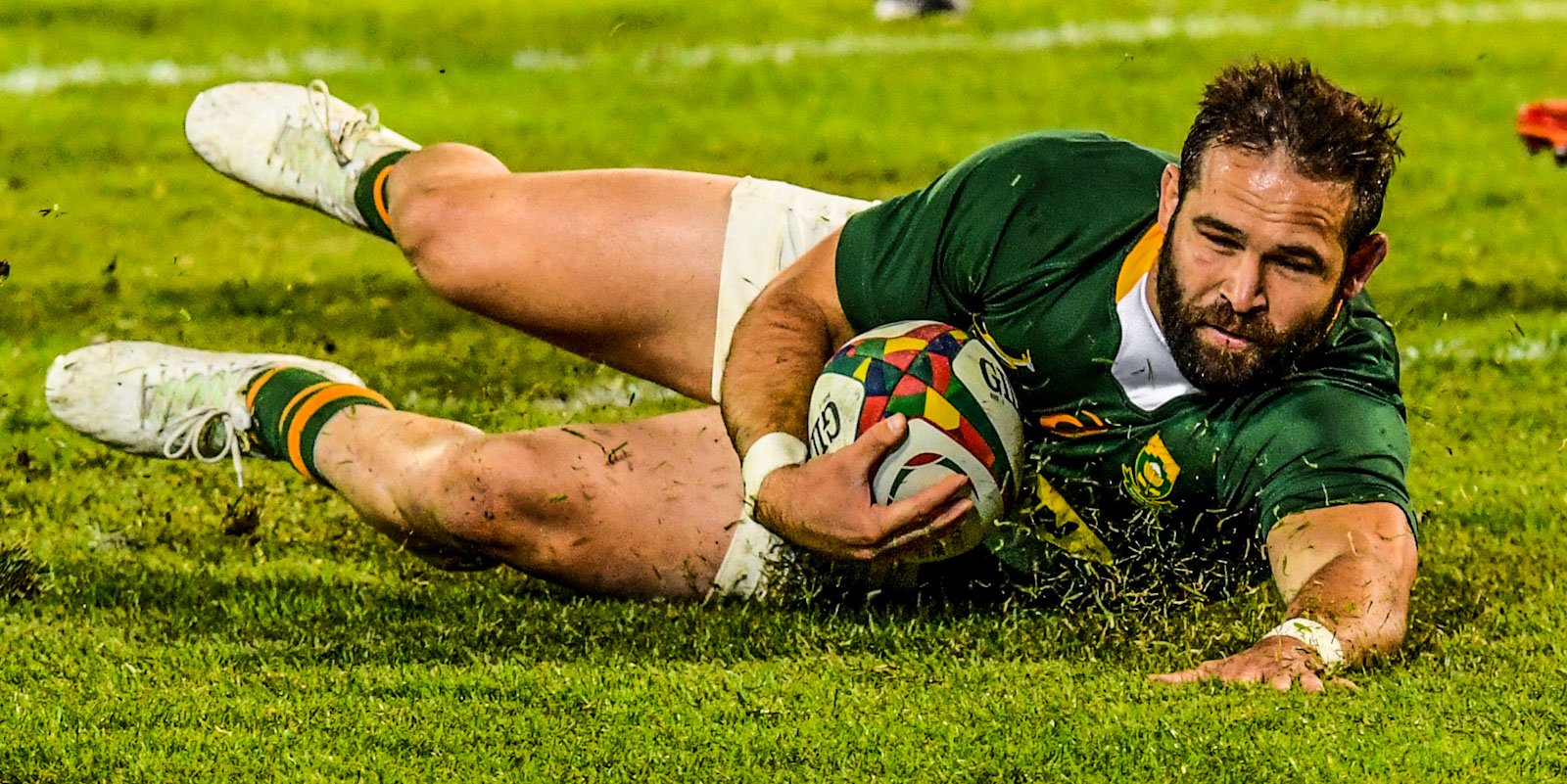 Cobus Reinach goes over for his try.

Pollard could not add to the fourth minute try, but the threats the hosts had out wide was clear early on. Whether that prompted the decision not to go for poles or not, the Boks often kicked for the corner, but it did not deliver any points.

The initial flurry aside, the grind of test rugby soon kick in and the physical nature of the game become a determining factor. Adamson had to speak to both captains as early as the 15th minute as the hits resulted in some ill-discipline.

Abzhandadze kicked a second penalty goal after 18 minutes and that handed the Georgians the lead. The Boks at this stage did not quite settle in their structures and allowed the visitors to dictate the areas of battle.

The Bok threats on the outside and counter remained obvious though, but credit to Georgia who decided to fight their battles upfront. The Bok pack did not respond well and conceded soft penalties which gave Georgia field position and attacking line-outs.

Georgia extended their lead when Pieter-Steph du Toit went offside from such a drive and Abzhandadze made it three out of three for a 9-5 lead.

Trevor Nyakane left the field after 30 minutes after a bump and Frans Malherbe entered the main arena. He immediately forced a scrum penalty and the kicks opted for the lineout drive. That resulted in some Georgian ill-discipline, with the Boks opting for more attacking lineouts.

No real reward though, but after a number of those and some good recycle by the pack, Handre Pollard crashed over. The TMO, Marius Jonker, and Adamson could not find common ground though and the try was ruled out, but at least the Springboks were starting to pin the Georgians down in their own red zone.

Pieter-Steph was ever-present, with ball in hand and on defence.

Adamson lost patience with the visitors defensive habits of stopping the Bok mauls illegally and flank Beka Saginadze was yellow carded for that after 33 minutes. That was the break the Boks needed and Bongi Mbonambi was finally driven over the line.

Pollard kicked the conversion and suddenly the seven point swing also changed the momentum of the match.

From the restart, the Boks attacked to the left, with Fassi again making good ground before chipping ahead. Willie le Roux, so instrumental as a link in all of this, combined with Cobus Reinach and the scrumhalf continued his try-scoring form, having had a hat-trick in his previous outing.

Pollard added the conversion and suddenly the Bok bounce was back.

The 10 point lead at the break was confirmed when Abzhandadze pulled a drop goal to the left after the half-time buzzer.

The second half saw a number of changes. Marvin Orie replaced Eben Etzebeth and did well as they Boks started to move the ball around. Nienaber called on his bomb squad front row and opted for an attacking scrum 50 minutes in.

The idea to subdue and submit the Georgain pack was working brilliantly and the visitors conceded a number of scrum penalties.

Bongi Mbonambi had a typically busy evening for the Boks and scored one of their six tries.

Kwagga Smith soon benefitted from yet another strong surge by his pack, with the No 8 picking up behind the scrum and outpacing the retreating defence to score his first Test try. Pollard kicked the conversion for a 26-9 lead 55 minutes in.

The fresh legs were starting to tilt the match even more towards South Africa and Jantjies scored after an hour of play after some good attacking play. A number of recycled attacks saw Pollard putting a great grubber through and from the ensuing maul, the nippy scrumhalf nipped over for the fifth try.

Meanwhile, Jasper Wiese also made a memorable entrace to earn his first Springbok cap with 25 minutes to play as he replaced Smith. Hooker Malcolm Marx joined Mbonambi to score off the back of another driving maul to extend the lead to 40-9 after 70 minutes of play.

That was the last score, but the momentum and confidence shown by the Springboks in the last 10 minutes bodes well for next week's encounter.