The home side made a great start by scoring their first of five tries within five minutes of the kick-off, controlling most of the play by putting the Vodacom Bulls under pressure with a clever kicking game and forcing their opponents to commit several penalties at the breakdown.

The Italian outfit came into the final as the only unbeaten side across both sections of the competition, a stunning turnaround after their winless 2020/21 Guinness PRO14 campaign, while the Vodacom Bulls only lost once in their march to the long-awaited first cross-hemisphere clash of the competition.

While Benetton were worthy winners, it must be added that Jake White's team were minus several Springboks such as Trevor Nyakane, Morne Steyn and Marco van Staden, all of whom were called up to national duty in Bloemfontein, while their talismanic skipper, Duane Vermeulen, is also side-lined because of injury.

The men from Pretoria didn't made it easier for themselves either with some poor handing, missing several soft tackles and a wayward kicking game. Benetton were also dominant at the breakdown, where the visiting team were guilty of committing several transgressions. Madosh Tambwe the Vodacom Bulls' only try against a brilliant Benetton.

The Vodacom Bulls will also lament their misfiring lineout, which robbed them of several good attacking options and handed precious possession back to the marauding home team.

Benetton made the best possible start when Ioane (wing) was sent over in the corner following a slick move which saw them outsmarting the visiting defence with some deft passing. Following two earlier missed kicks at goal, Paolo Garbisi (flyhalf) then slotted his first successful kick of the afternoon with an easy penalty goal attempt from under the poles to put the home team up by 8-0.

It took the Vodacom Bulls all of 25 minutes to launch their first serious threat on the Benetton try line when a flying Marco Jansen van Vuren (centre) was tackled into touch as he was launched himself to try and score in the corner.

The visitors kept up the pressure and from a lineout they flexed their forward muscle to maul towards the whitewash, and when the driving pack was halted on the line, Madosh Tambwe (right wing) scooped up the ball to score.

A Chris Smith penalty goal later levelled matters at 8-8, however, just when it seemed as if the Vodacom Bulls were finally getting a bit of momentum, they managed to conceded a soft try to hand the advantage almost immediately back to the home team.

Scrumhalf Ivan van Zyl failed to control a tapped lineout ball on his own line, which allowed former Junior Springbok hooker Corniel Els to pounce on the loose ball for his team’s second try of a very impressive first half (13-8). 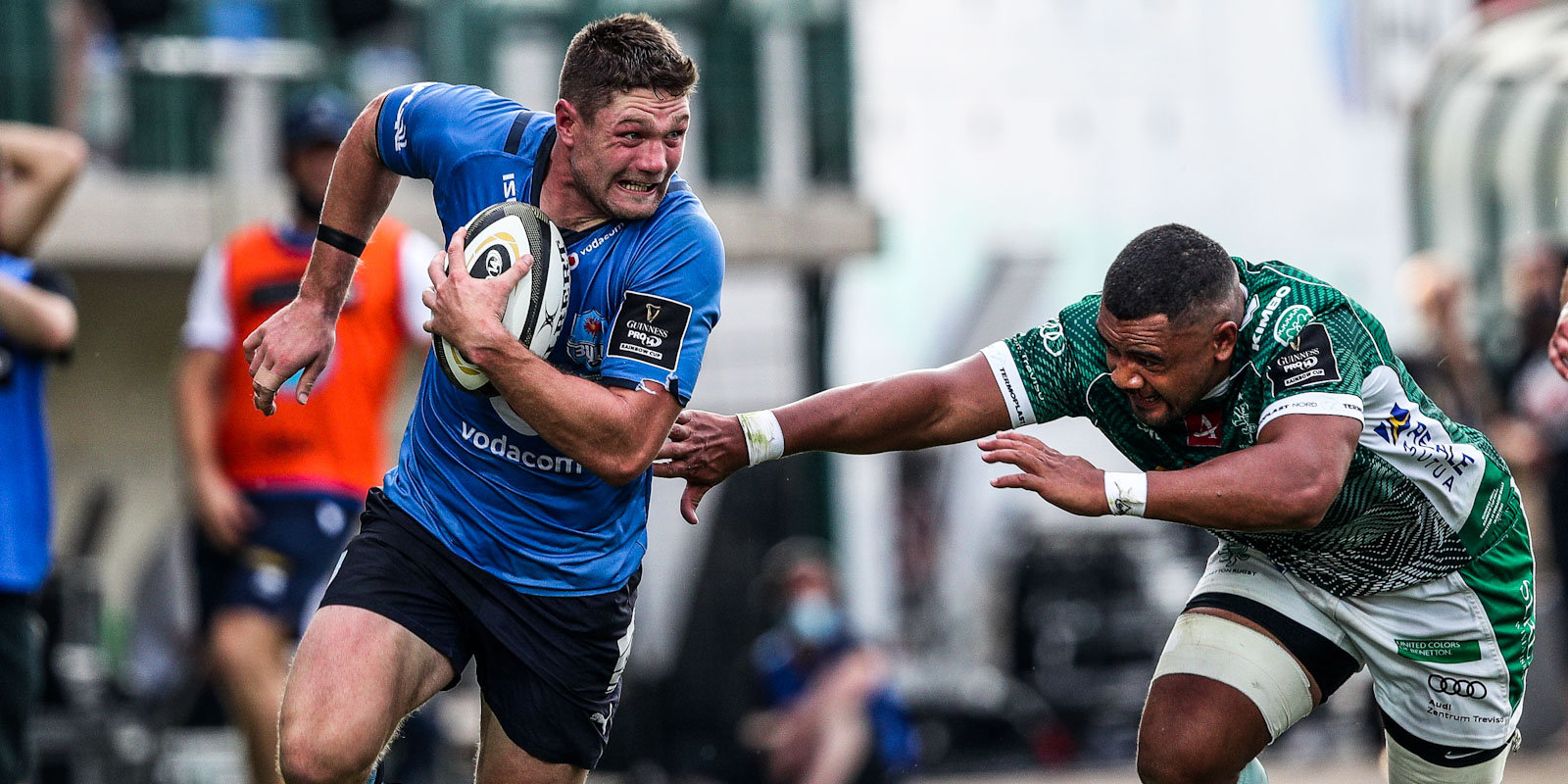 Marco Janse van Vuren puts on the after-burners for the Vodacom Bulls.

The livewire hooker was at the heart of another Benetton attack, which saw Stravino Jacobs (left wing) yellow carded for a "seatbelt tackle" on Els, which resulted in a penalty try and handed Benetton a 20-8 lead at halftime.

Any hopes of an early Vodacom Bulls fightback was doused as early as three minutes into the second half when the home team made the extra man count by scoring their fourth try through loose forward Michele Lamaro. With Garbisi slotting the conversion and adding another penalty goal a few minutes later, it left Marcell Coetzee’s men with a mountain to climb as the score climbed to 30-8 in favour of the dominating green jerseys.

Another try by Benetton wing Edoardo Padovani stretched the lead even further to 35-8, and with both sides making changes as well as the energy sapping heat taking its toll on the players, the second half lost a bit of sparkle compared to the exciting opening stanza.

Tambwe was perhaps somewhat unlucky to be called back from scoring his second try when the television match official ruled that an earlier pass by Coetzee was forward.

However, when the final whistle finally went, there was no denying that Benetton had outclassed the Vodacom Bulls to scoop their first piece of European silverware in front of an ecstatic crowd.