Dr Dawie de Villiers, a former Springbok captain who passed away at the age of 81 on Saturday night after a long battle with cancer, was honoured for his role in South African rugby, but also in the wider society as a politician later in his life, by Mr Mark Alexander, president of the South African Rugby Union.

“Dawie de Villiers captained the Springboks as the winds of change were beginning to blow through the political climate of sport and his final tour was the 1969-70 'demo tour' of the UK,” said Mr Alexander.

“By that time, he had established himself as one of the Springboks’ greatest ever captains and the fact that he was carried from the field on the shoulders of UK Barbarians greats Gareth Edwards of Wales and Mike Gibson of Ireland in his final match, proves the respect and standing in which he was held.

“That respect later saw him become part of those winds of change in political life as our country moved to democracy. He was a great servant of the country.”

Dr De Villiers was born on 10 July 1940 in Burgersdorp. After he finished his schooling at Bellville High School, he studied theology at Stellenbosch University.

He was later a minister in the old National Party regime, but also in the first democratically elected government under the late former president, Mr Nelson Mandela. Dr De Villiers also served as South African ambassador in London, as well as was a lecturer in philosophy (in which he completed his doctoral studies) and a reverend in the Dutch Reformed Church. 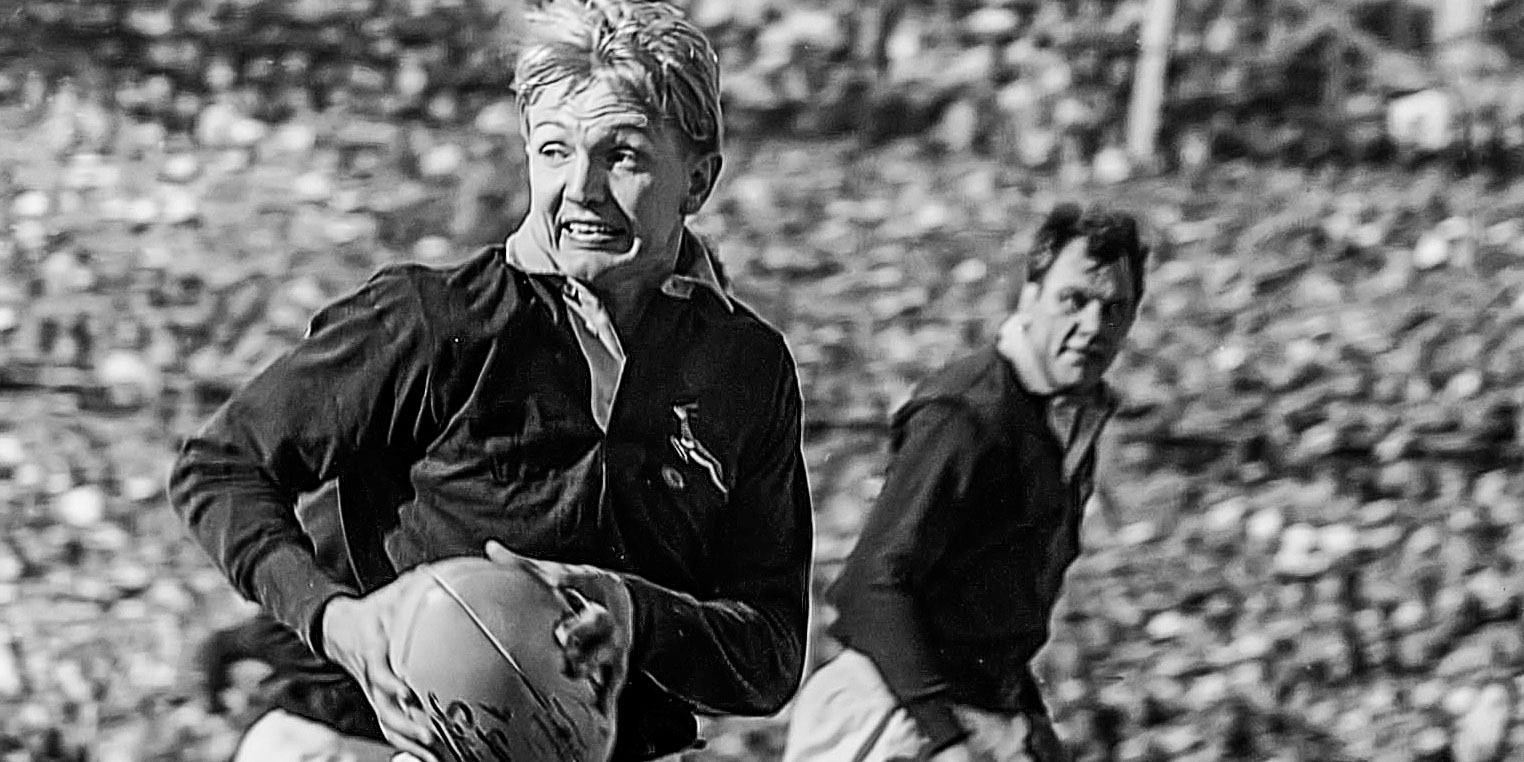 Dawie de Villiers on the attack for the Springboks.

As a “political scrumhalf”, as he was described by well-known philosopher Willie Esterhuyse, he was also very involved in the talks that led to the unbanning of the ANC, the subsequent release of Mr Mandela and the first democratic elections in 1994. Dr De Villiers retired from politics in 1996.

Provincially, Dr De Villiers played scrumhalf for Western Province, Boland and the Lions (then still Transvaal). He played 25 Tests and a total of 53 matches for the Springboks between 1962 and 1970, and was captain in 22 Tests – the first against the All Blacks in New Zealand in 1965 at the age of 25.

During his Test career, Dr De Villiers was on the winning side in two series against the British & Irish Lions (1962 and 1968), France (1967), and Australia (1969), while his international swansong was in the triumphant series against the All Blacks in South Africa in 1970, when the Boks won three of the four Tests.

Dr De Villiers also held the record for the most number of Tests as Springbok captain until he was overtaken by Francois Pienaar in 1995.

“To lead South Africa for as long as he did in the amateur era and to hold the record for tests captained until the arrival of professionalism says all you need to know about his stature as a player and leader,” said Mr Alexander.

“He was a great and loyal servant of Springbok rugby and we pay tribute to his dedication and the service he gave to the sport and South African life in general.”

He is survived by his wife Suzaan, three daughters and a son, as well as nine grand-children.

A new digital portal bringing South African rugby supporters closer to the Springboks and other national teams has been ...

The top Under-16 and Under-18 girls rugby players in the country will start the highlight of their annual season this we...

The Cell C Sharks had to dig deep to beat an inexperienced Leinster side by 28-23 (half-time 14-17) in a very tense Vodacom United Rugby Championship clash played in difficult conditions in Durban on Saturday evening.

Mr Mark Alexander, President of SA Rugby, paid tribute to former Springbok loose forward Pedrie Wannenburg, who passed away after he was involved in a serious car accident in Houston in the USA on Friday evening (early on Saturday morning SA time). He was 41 years old.

The Vodacom Bulls scored six tries in a determined showing in their Vodacom United Rugby Championship clash against Benetton at Loftus Versfeld on Saturday to secure a rewarding 46-29 victory, which kept them in quarter-final contention in the North-South showpiece.

Catch the action live from Pretoria in the opening round of the Women's Premier Division.

The Emirates Lions were made to pay for a slow start and unnecessary errors as Connacht recorded their third victory over South African opposition in the 2022 Vodacom United Rugby Championship with a 33-30 win in Johannesburg on Saturday afternoon.

With 500 days to go to the start of the Rugby World Cup in France in 2023 on Tuesday, Springbok coach Jacques Nienaber said excitement started to build with the global showpiece moving into view, despite a bumper 2022 season still ahead for South Africa.

Exciting young scrumhalf Bernard van der Linde scored a try at the death as UP-Tuks edged Maties 29-23 in a dramatic final in Stellenbosch to claim the FNB Varsit Cup title with the victory equaling the most number of trophies won by a side, as the students from Stellenbosch and Pretoria have now each won the competition five times.

The Springbok Women's Sevens’ return to the international stage is not only welcomed by Paul Delport, but also the more experienced players, and added to that, there is massive excitement amongst the younger squad members who will be involved in international sevens rugby for the first time.

Stormers change three for top of the table clash

The DHL Stormers starting team for Saturday's top of the table clash in the Vodacom United Rugby Championship against Leinster in Cape Town show three changes from the side that beat Glasgow Warriors last week.

The Cell C Sharks had to dig deep to beat an inexperienced Leinster side by 28-23 (half-time 14-17) in a very tense Vodacom United Rugby Championship clash played in difficult conditions in Durban on Saturday evening.