The Emirates Lions were made to pay for a slow start and unnecessary errors as Connacht recorded their third victory over South African opposition in the 2022 Vodacom United Rugby Championship with a 33-30 win in Johannesburg on Saturday afternoon.

The hosts, who deserve credit for never giving up, actually outscored their visitors by four tries to three, but Ireland flyhalf Jack Carty ensured his team hung on with an almost flawless kicking display, punishing the Emirates Lions for too many indiscretions in their own half.

In the end and despite playing with a lot of vigour – especially in the second half – the men from Johannesburg just could not recover from their slow start. It took them 15 minutes to get into a meaningful attacking position, but by then it was already 14-0 to the visitors.

Unlike their hosts, the Irishmen held onto the ball very well and used their opportunities. They got the scoreboard ticking over in the third minute already, with Cian Prendergast (flanker) going over for their first try.

Six minutes later, Connacht stretched their lead to 14-0 courtesy of a penalty try. At this stage, there was only one team on the field. The Emirates Lions were full of plans on attack and looked good when they had the ball, but elementary mistakes cost them, while the visitors were relentless and patient on defence.

When the hosts eventually got into their stride, Jordan Hendrikse (flyhalf) was able to put points on the board with a penalty goal in the 18th minute.

The game then went into a bit of a lull, but shortly before the break, Wandisile Simelane (centre) lit up Emirates Airline Park with a brilliant outside break from an attacking lineout before he put Rabz Maxwane (wing) away for a superb try. The conversion went wide, and although Connacht led by 14-8 at the break, the hosts had their tails up. 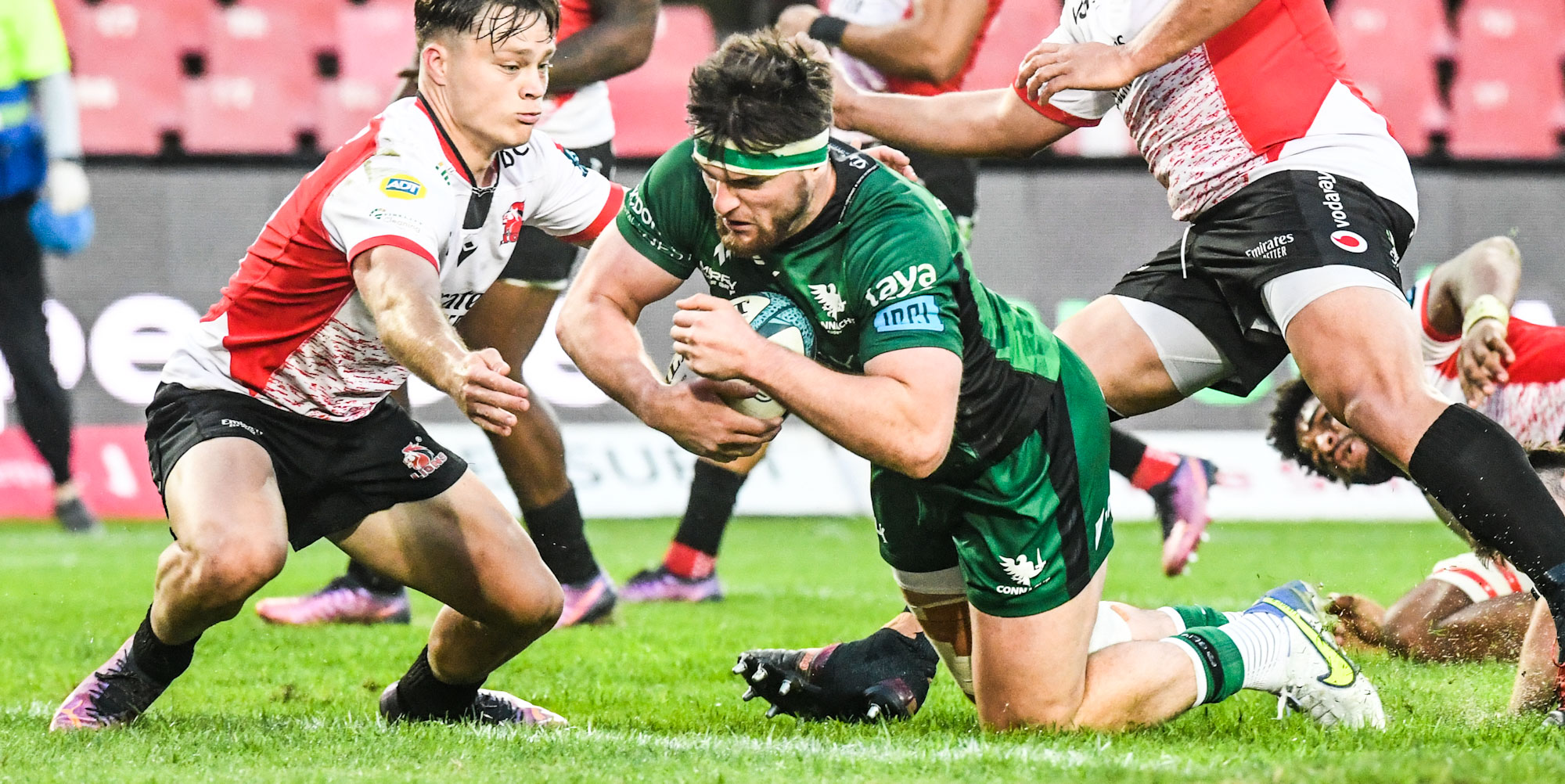 Tom Daly goes over for a crucial try for Connacht.

Carty added two early penalty goals and Hendrikse one after the break, before the hosts hit their attacking stride with three tries in 15 minutes to almost put Connacht on the ropes.

However, a Tom Daly try – after a missed tackle on Irish centre Bundee Aki – just after the hour-mark gave the visitors a 12-point lead and forced the Emirates Lions into playing catch-up rugby, while they should have taken the game by the scruff of its neck at that stage.

The scores were tied at 30-30 with 10 minutes to go, and in the 75th minute Carty had the final say with his fourth penalty goal.

Try as they might, the Emirates Lions could not do what was needed and were made to pay for ill-discipline, which allowed Connacht to record only the second win in South Africa for the teams from the Northern Hemisphere in the 2022 season.

SA Rugby Women’s Premier Division champions, Border Women, will start the defence of their title against the Blue Bulls Women at Loftus Versfeld in Pretoria on Saturday in the first of three matches as the 2022 rendition of the top-flight provincial women’s competition kicks off.

The DHL Stormers outclassed the Glasgow Warriors with a dazzling display in their Vodacom United Rugby Championship clash in Cape Town on Friday night, scoring four tries to one for a bonus-point 32-7 victory.

The Springboks have selected Toulon as their base for the pool stages of the Rugby World Cup in 2023 in France, with the team set to be based in Paris for their third pool match against Ireland in at the Stade de France in Saint-Denis.

Papier and Hendricks to start for Bulls against Benetton

The Vodacom Bulls have made two changes to their starting XV for their Vodacom United Rugby Championship clash against Benetton in Pretoria on Saturday afternoon, with Embrose Papier to start at scrumhalf, while Cornal Hendricks comes in at inside centre.

The Cell C Sharks will look to returning Springbok fullback Aphelele Fassi to bring his special form of magic on Saturday when they host table-topping Leinster at Hollywoodbets Kings Park in a massive Vodacom United Rugby Championship clash.

The DHL Stormers marched into an impressive second place and the Cell C Sharks into fourth on the Vodacom United Rugby Championship log, while the Vodacom Bulls remained in eighth position in a rewarding round for three of South Africa’s four sides.

Dr Dawie de Villiers, a former Springbok captain who passed away at the age of 81 on Saturday night after a long battle with cancer, was honoured for his role in South African rugby, but also in the wider society as a politician later in his life, by Mr Mark Alexander, president of the South African Rugby Union.

The 2022 Women’s Premier Division kicked off with a big upset on Saturday, when the Blue Bulls Women shocked defending champions Border Ladies 12-0 in Pretoria in the opening round to lay down an early marker in the new season.

With 500 days to go to the start of the Rugby World Cup in France in 2023 on Tuesday, Springbok coach Jacques Nienaber said excitement started to build with the global showpiece moving into view, despite a bumper 2022 season still ahead for South Africa.

SA Rugby Women’s Premier Division champions, Border Women, will start the defence of their title against the Blue Bulls Women at Loftus Versfeld in Pretoria on Saturday in the first of three matches as the 2022 rendition of the top-flight provincial women’s competition kicks off.

The DHL Stormers marched into an impressive second place and the Cell C Sharks into fourth on the Vodacom United Rugby Championship log, while the Vodacom Bulls remained in eighth position in a rewarding round for three of South Africa’s four sides.