The Cell C Sharks held off a spirited second half fightback from the Sigma Lions to win 45-31 and register their third consecutive Carling Currie Cup match, while at the same time condemning the Highvelders to their third straight loss in Johannesburg on Saturday evening.

The visiting side went into the halftime break firmly in command with the score 20-7 in their favour at Emirates Airline Park, and the win pushed them to the top of the Carling Currie Cup standings.

It was a determined Sigma Lions outfit that came roaring back in the second half, scoring four tries to deliver a much improved performance after the break. In the end, they matched the Cell C Sharks' overall tally of five tries, however, the difference was their tendency to concede penalties at regular intervals, which allowed Boeta Chamberlain and Sanele Nohamba to kick four successful penalty goals, which ultimately proved the difference.

The Sigma Lions got the match off to a perfect start when right wing Boldwin Hansen exploited a lapse in the Cell C Sharks' defence to snatch a high bouncing ball away from Yaw Penxe, turning on the speed dial to score under the posts. Vaughen Iaacs added the extras to give them a 7-0 lead.

But the Joburg side themselves then had a soft moment which allowed hard-running Cell C Sharks left wing Marnus Potgieter to cut inside and beating the cover defence for the visitors' quick response. Chamberlain slotted the conversion from a difficult angle to level the scores at 7-7 and with a lot of rugby still to be played in the first half. 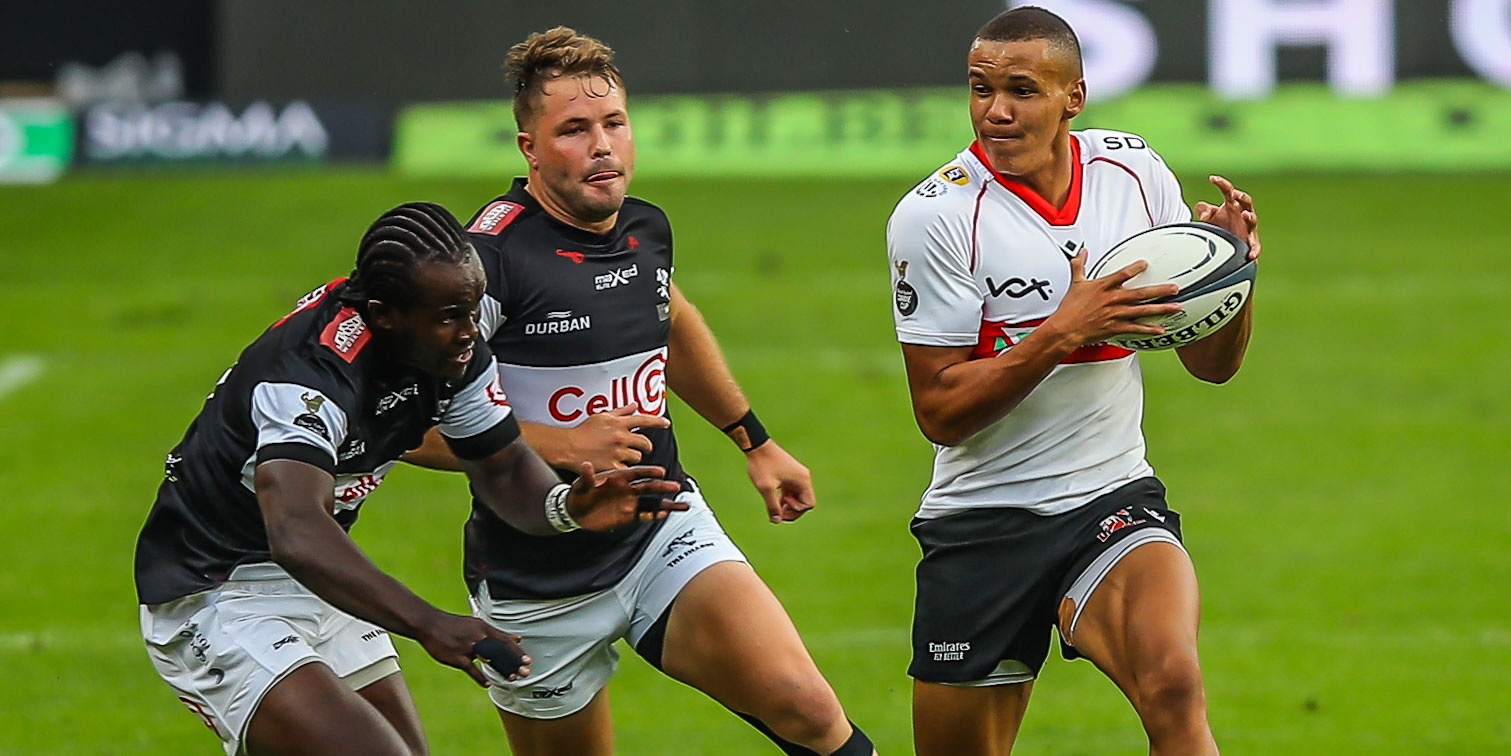 Boldwin Hansen on the attack for the Sigma Lions.

Unfortunately for the Jozi side, Hansen had to leave the field halfway through the opening stanza due to a leg injury and he was replaced by the experienced Fred Zeilinga.

Meanwhile, Cameron Wright, who was named Man of the Match, exploited the home side's brittle defence once more when he was allowed to break from the back of a solid scrum to score out wide for another converted try. Apart from the conversion, Chamberlain also added two penalty goals to stretch the visitors' halfway lead to 13 points.

The home side's lineout was also a cause for concern as they allowed their opposing jumpers to spoil many throw-ins, thereby depriving them from a good attacking platform.

The KwaZulu-Natalians quickly got into their stride after the restart, scoring further tries through loose forwards Thembelani Bholi and Mpilo Gumede as well as replacement hooker Dan Jooste. The Highvelders were not to be outdone as they managed to cross the whitewash on four occasions.

Loose forward Emmanuel Tshituka went over the line from close while left wing Divan Rossouw made the most of Vincent Tshituka's power surge to dot down near the corner. Later on Morne Brandon and James Mollentze also helped themselves five pointers.

Nienaber: Facing Wales will be a proper Test series

The Springboks are under no illusions about the magnitude of the challenge that awaits them in July, when Wales will arrive in South Africa for three Tests against the Rugby World Cup champions.

Tafel Lager Griquas continued their recent dominance over DHL Western Province when they held out for a thrilling 22-20 triumph in their Carling Currie Cup fixture played in Kimberley on Friday evening.

The Springbok Women's Sevens team will take a small, but important step in Hermanus on Saturday when they resume match action for the first time in two years, returning to the Mount Pleasant Sports Fields where they played their last competitive match in February 2020.

Carling Currie Cup action resumes on Friday evening, with the Toyota Cheetahs and Cell C Sharks facing tricky away matches in their quest to keep their unbeaten starts to the competition intact and overtake the Vodacom Bulls at the top of the standings.

Etzebeth on his way back to South Africa

Eben Etzebeth, the most-capped member of the 2021 Springbok squad who ended the season with 97 Test caps to his name, will return to South Africa later this year after signing a contract with the Durban-based Cell C Sharks.

Hermanus outing worth their while says Delport

Their first appearance at a sevens tournament in two years left Springbok Women’s Sevens coach Paul Delport with more smiles than frowns and his players reminded him of their potential in the shortened version of the game.

Mr Ebrahim Patel, the first president of the South African Rugby Football Union (SARFU) and one of the driving forces behind the movement to rugby unity towards the end of the 20th century, passed away early on Monday morning at the age of 78 years old after suffering a stroke.

In a weekend where inclement weather sent out an icy warning to the South African teams that are about to venture north of the equator, it was Leinster who again underlined why they are going to be so hard to keep away from the inaugural Vodacom United Rugby Championship trophy.

Nienaber: Facing Wales will be a proper Test series

The Springboks are under no illusions about the magnitude of the challenge that awaits them in July, when Wales will arrive in South Africa for three Tests against the Rugby World Cup champions.