The South Africans continued their winning streak that started in Vancouver and Edmonton in the 2021 season, and continued in Dubai (twice), last weekend in Malaga and on Sunday in Seville to notch up 34 wins, their best run ever in the World Series.

The victory in Seville did not come easy as the Blitzboks were pushed in pool play, where they had to come from behind against Spain and the USA, and in the knock-out stages, where they were trailing Scotland, before hitting their straps in the Cup semi-final against Ireland and a hard-fought win over Australia in the final.

“It is pretty emotional for us, we had to dig deep,” Impi Visser, who led the Blitzboks in Seville, said afterwards.

“They are a tough team to play against, credit to them. I think our boys just grafted a bit more and in the end, we wanted it a bit more.”

Visser took over the captaincy from Siviwe Soyizwapi, who was injured in Malaga last week, while the team also lost Branco du Preez against Scotland due to injury and had to watch Justin Geduld being stretchered off in the final against Australia.

“This was a win that tested our character and resilience, and it is a feeling of relief and pride to know that we stood firm against some very good teams out there,” added Visser.

“It was never about the winning streak or number of trophies won, it is our system that rewarded our belief and trust.”

Free-running Christie Grobbelaar was named Player of the Final with a brace of tries, and he was all smiles and compliments afterwards.

“This is a team effort, we each have a role to play and when we do our jobs well, the rewards are there for everyone to enjoy,” said Grobbelaar, whose tries on either side of the break in the final put the Blitzboks on the road to victory after a slow start.

“This was a hard-fought tournament. We had some bad patches, but we kept the faith and belief in what we needed to do. These wins are testimony to the hard work we do in Stellenbosch.” 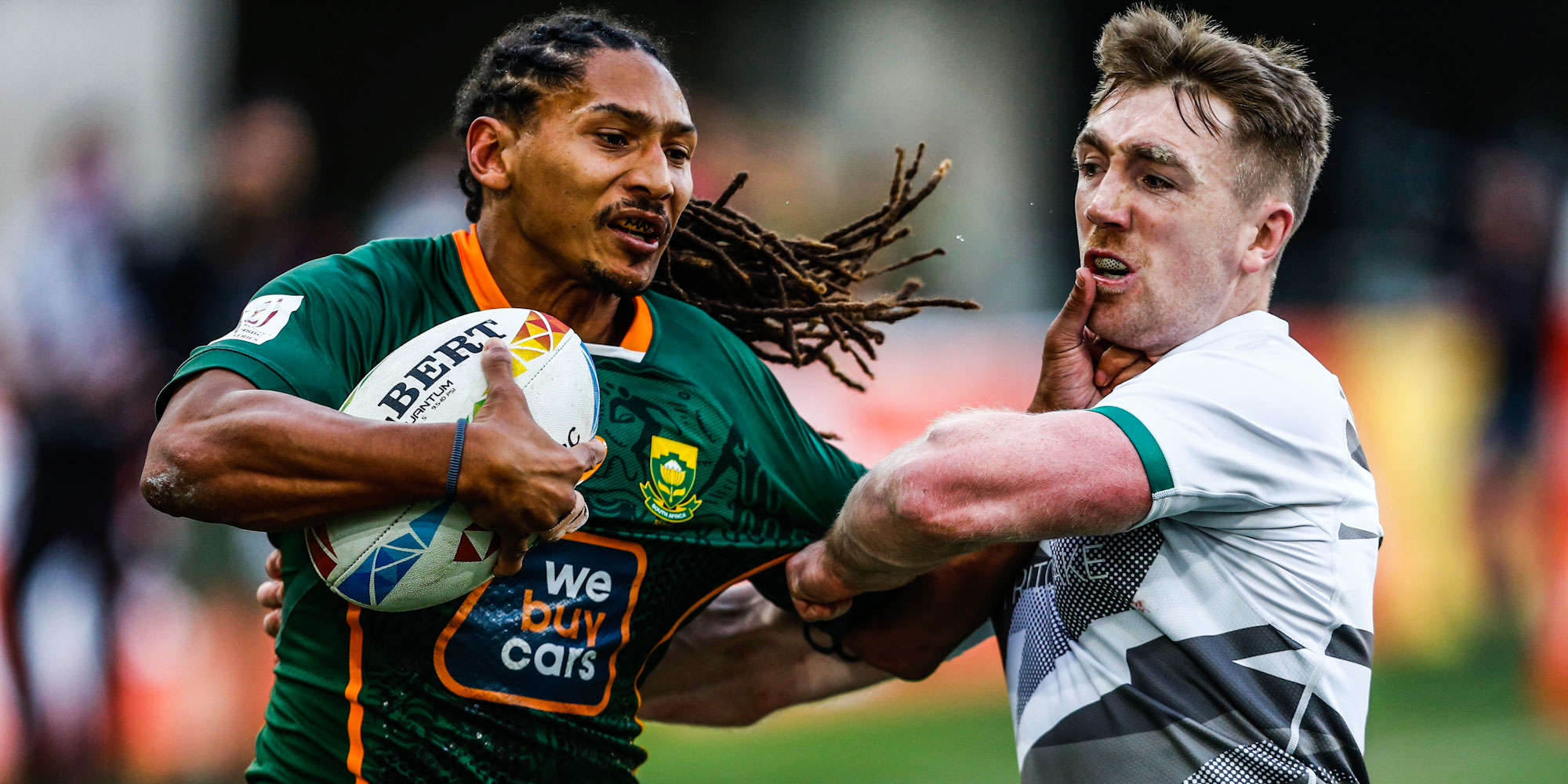 Justin Geduld scored one of the four tries against Ireland, but left the field injured early in the final against Australia.

Australia drew first blood when Ben Dowling scored late in the first half – shortly after Geduld left the field – and with time running out, the Blitzboks kept up the pressure.

This led to a great try by Grobbelaar after the hooter had sounded. Selvyn Davids kicked ahead and the big forward showed his soccer skills to get the ball into the in-goal area where he dotted down.

Both first half tries were converted for a 7-7 score at the break, but less than a minute into the second half, Grobbelaar got his second try wide on the right after a quick-tap penalty. Selvyn Davids added a second conversion to put South Africa in the lead by 14-7 with five minutes to go.

Darren Adonis was sin-binned moments later, but the Aussies made a hash of the penalty which allowed Ryan Oosthuizen to grab a loose ball and score the Blitzboks’ third try.

Davids converted to stretch the Blitzboks’ lead to 21-7 and to compound matters for Australia, Josh Turner was also yellow carded for foul play after the try was scored, with South Africa given a penalty on half-way instead of the restart.

A second yellow card followed for Australia as Maurice Longbottom was sent off with the men in green and gold on the attack, but they kept on hammering away. The Blitzboks' defence was simply too good and from a turn-over, they sent it wide to where Adonis was waiting to score South Africa's fourth try.

Visser rubbed salt into the Aussie wounds with a fifth try as the buzzer sounded to end two magical weeks in Spain for the Blitzboks.

A beautifully worked try from @Blitzboks and Darren Adonis does the rest ✅#ImpactMoment | @DHLRugby pic.twitter.com/ElxRguG1y1

In their first game on Sunday, the Springbok Sevens booked their place in the final of the HSBC Spain Sevens in Seville, putting in a solid performance in their semi-final against Ireland, where they scored four tries without reply to win 26-0. Australia beat Argentina by 28-12 in the other semi-final.

The match against the Irish started in familiar fashion for the Blitzboks, as they were yet again slow out of the blocks and had to defend for long periods. They did so with aplomb and showed great discipline in that area of play.

Once they had the ball though, their attack was swift and precise.

The Blitzboks' first try came from a turn-over penalty won by Geduld before Grobbelaar was put in possession all of 70m out. There was no stopping the prop as he showed his great pace to score.

That knocked the stuffing out of the Irish, and Shaun Williams was over the line in no time, finishing a sublime try from first phase where Selvyn Davids and Geduld probed before Williams swerved inside his man to score. Davids kicked the conversion and at halftime the score was 14-0.

The second half saw more of the same. First Geduld ran a beautiful line from a lineout to score and after Davids was impeded and the Irish player sin-binned for the act, the playmaker kicked ahead and scored under the sticks for the final try of the match.

The Blitzboks moved 18 points clear on the overall log with the win. They now lead the World Series on 88 points, with Argentina (70), Australia (66) and USA (55) running out of time to catch the South Africans in the remaining tournaments in Singapore, Vancouver, Toulouse, London and Los Angeles.

A new digital portal bringing South African rugby supporters closer to the Springboks and other national teams has been ...

South Africa’s AJ Jacobs and Morne Ferreira have been included in a strong panel of match officials for the Rugby World ...

HSBC Cape Town Sevens back with a bang...

The ever-popular HSBC Cape Town Sevens will return to the Mother City on the weekend of 9-11 December this year, when th...

The Springbok Sevens finished the HSBC London Sevens on a high with a 14-5 victory over Ireland to claim fifth spot and ...

The Springbok Sevens on Sunday regained the lead in the HSBC World Rugby Sevens Series with a fifth-place finish at the ...

A penalty try after the full-time buzzer had sounded saw the DHL Stormers secure a 22-22 draw with the Cell C Sharks in a humdinger of a Vodacom United Rugby Championship clash at Hollywoodbets Kings Park in Durban on Saturday.

The Vodacom Bulls finally recorded their second victory in the Vodacom United Rugby Championship when they beat the Emirates Lions by 34-10 in a hard-fought Jukskei Derby on a wet Saturday afternoon in in Johannesburg.

Kolisi: “Award could have gone to anyone”

Springbok captain Siya Kolisi said he was “honoured and grateful” to win the SA Rugby Player of the Year award for the 2021 season after seeing his named engraved on the prestigious trophy in Durban on Thursday.

Spanish experience one to behold for Blitzboks

The HSBC Spain Sevens double was a remarkable feat for the Springbok Sevens squad they returned to South Africa on Tuesday with the knowledge that their four-tournament winning streak in the 2022 HSBC World Rugby Sevens Series has given them the perfect start to the season, that culminates in Los Angeles in August.