The Cell C Sharks will travel to Pretoria next weekend for their second successive appearance in the Carling Currie Cup final after they beat a game Tafel Lager Griquas, 28-24, in the second semi-final in Durban on Saturday evening.

Despite being on the back-foot at stages, the KwaZulu-Natalians showed great patience to outmuscle the visitors from the Northern Cape – with big lock Le Roux Roets prominent with ball in hand and on defence – outscoring their opponents by three tries to two in the process, with Kerron van Vuuren crossing for a brace for the hosts.

Both sides were guilty of making too many unforced errors and not really showing enough enterprise on attack, and while the Sharks improved as the game progressed, especially in defence, Griquas did not make their opportunities count.

It wasn’t all plain sailing for the Cell C Sharks though, especially in the first half, when Griquas enjoyed territorial advantage and kept the scoreboard ticking over through the metronomic boot of George Whitehead.

Failing to breach the hosts’ defence ended up costly though as the men from the Northern Cape’s campaign came to an end at Jonsson Kings Park, where the hosts showed great tactical awareness to hold onto the lead for the entire second half. 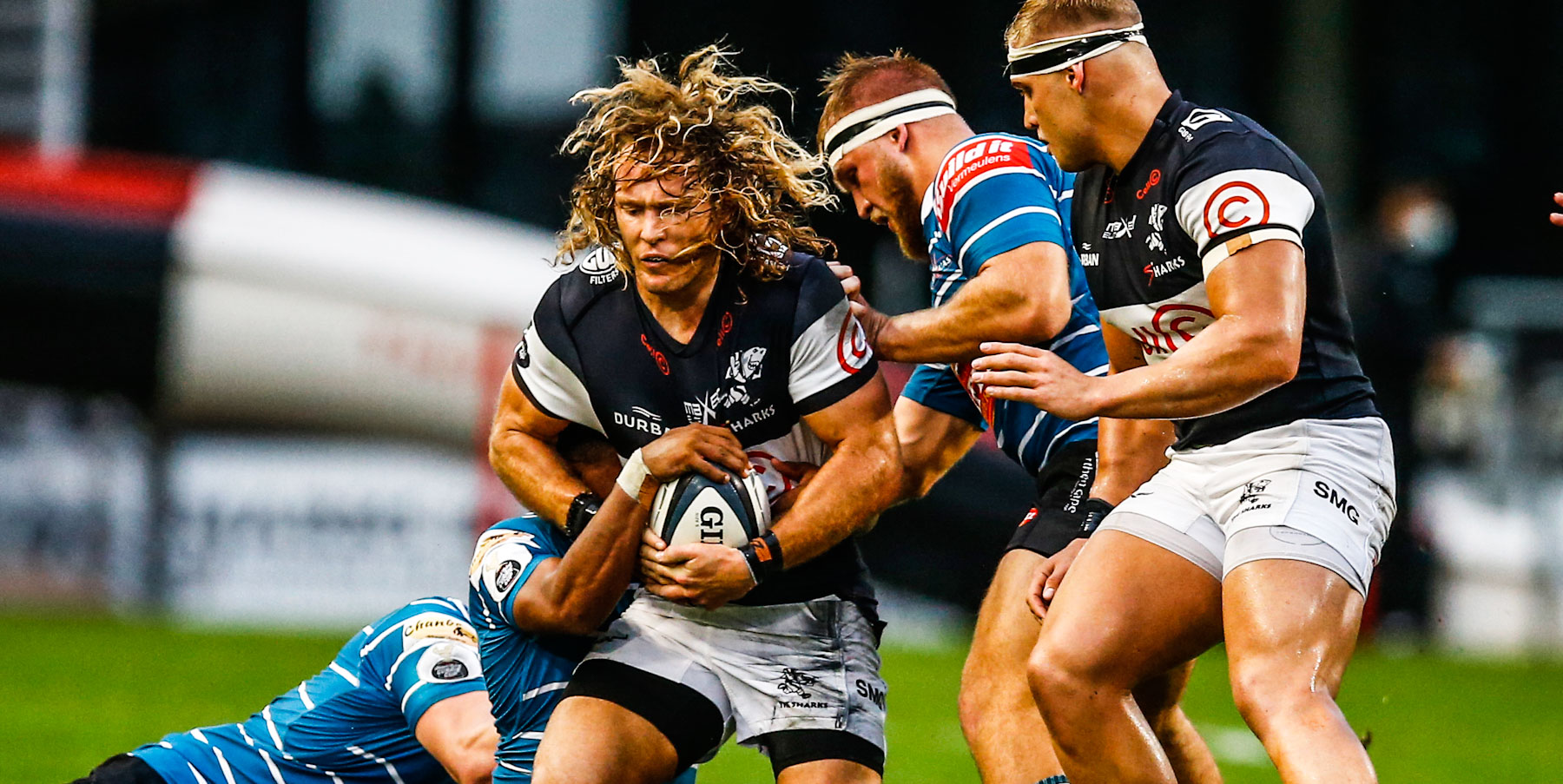 Werner Kok is held up by the Griquas defence.

The hosts started very well, spreading the ball around with confidence, before Griquas infringed to allow Curwin Bosch to put his side up by 3-0 in the fourth minute.

But Tafel Lager Griquas slowly got into the game, managed to hold onto the ball and keep the KwaZulu-Natalians pinned in their own half.

With territorial advantage in his team’s favour, Whitehead kicked three from four penalty goals to ease the visitors into a 9-3 lead after 25 minutes, before the Sharks woke from their slumber to dominate the last 10 minutes of the half.

First Van Vuuren was driven over from a strong lineout maul, and six minutes later the Durbanites scored again, with Marius Louw dissecting Griquas’ 10/12 channel with a very strong run.

Bosch converted both tries to put his side 17-9 up at the break, but it could have been different had a brilliant try by Tafel Lager Griquas fullback Ashlon Davids stood after a great period of counter-attacking rugby by both sides.

Davids went over from a brilliant foot-pass by Johnathan Francke, but a knock-on was spotted earlier in the move and the try was disallowed, which gave the Sharks some respite. 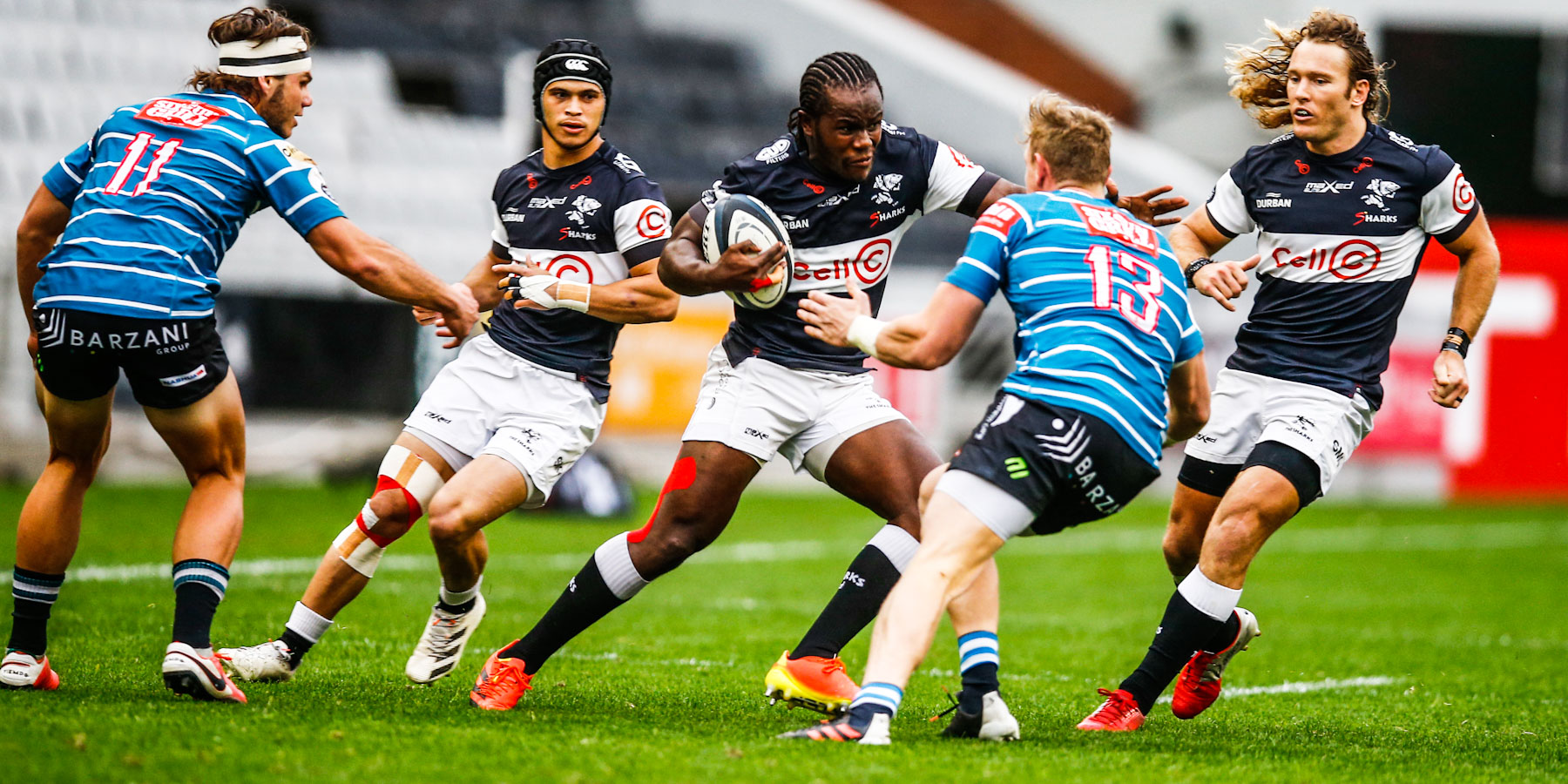 Yaw Penxe looks for space on the attack.

The second half started with Whitehead and Bosch trading early penalty goals before Adre Smith got Griquas’ first try from a great piece of counter-attacking play, with Eduan Keyter and Hanru Sirgel prominent.

Whitehead failed to add the extras, making it a three-point game, but when Van Vuuren went over for his second try five minutes later, and the Cell C Sharks clearly growing in confidence, the eight-point buffer looked like a bridge too far for the visitors.

Tafel Lager Griquas had a late opportunity when Louw was yellow carded for a cynical infringement, but the visitors could not capitalise, and shortly thereafter Bosch added another penalty goal to increase the Sharks’ lead to 28-17.

Johan Momsen scored a late maul try for Griquas, to make it 28-24, and although the hosts controlled the restart, the Sharks’ suffocating defence kept them pinned in their own 22, where another unforced error brought an end to the match.

Salmaan Moerat and Ernst van Rhyn have been appointed co-captains of the DHL Stormers for their forthcoming European Vod...

Vodacom dials in as North and South collide for UR...

The bold new world of the United Rugby Championship will fly under the banner of Vodacom following the announcement toda...

Damian Willemse is embracing his role as utility back in the Springbok team they brace themselves for a trying four weeks featuring back-to-back Tests against Australia and New Zealand in the Castle Lager Rugby Championship.

Teams are in for the Carling Currie Cup semi-finals

The teams are in and the players are ready for what promises to be a bumper Carling Currie Cup semi-final round, with all the play for in Pretoria and Durban.

A rampant Vodacom Bulls side marched into their second successive home Carling Currie Cup Final as they thumped DHL Western Province 48-31 at Loftus Versfeld in Pretoria on Friday evening.

Boks make most of extra week in Australia

Mzwandile Stick believes the Springboks will benefit greatly from the extra week in Australia as they prepare for their demanding Castle Lager Rugby Championship schedule in the next four weeks and said they have has settled in well since arriving Down Under.

The Cell C Sharks will travel to Pretoria where they will try to dethrone the Vodacom Bulls as Carling Currie Cup champions after these two powerhouses successfully negated the semi-finals to set up a repeat of the 2020 Final at Loftus Versfeld.

U20: Leopards, Lions and WP victors in round four

The Leopards scored 13 tries against Eastern Province and the Lions eight against Toyota Free State in their SA Rugby U20 Cup clashes over the weekend, while the DHL Western Province secured an important win over the Vodacom Bulls in Cape Town to keep their top four standing on the log intact after four rounds of action.

Boks will make "big mistake" to look at Wallabies’ past results

Springbok assistant coach Deon Davids said they would make a big mistake to underestimate the Wallabies based on their previous results as the South Africans resumed their preparations on Tuesday for their Castle Lager Rugby Championship Test against Australia in Gold Coast on Sunday.

Duane Vermeulen will make his first appearance for the Springboks since the 2019 Rugby World Cup final when South Africa resume their Castle Lager Rugby Championship campaign on Sunday against Australia at the CBUS Super Stadium in Gold Coast.

Boks make most of extra week in Australia

Mzwandile Stick believes the Springboks will benefit greatly from the extra week in Australia as they prepare for their demanding Castle Lager Rugby Championship schedule in the next four weeks and said they have has settled in well since arriving Down Under.