The Springbok Sevens squad received a boost in their Olympic preparation on Friday when stalwarts Stedman Gans, Dylan Sage and Mfundo Ndhlovu all made successful returns to the team.

The Blitzboks played four matches against the SA All Stars Rugby Academy at Johannesburg Stadium, with the scoreboard not the main centre of attraction for once.

The performances of Gans, Sage and Ndhlovu were though. Gans has recently recovered from an ankle injury, Sage needed time on the field after a year playing fifteens in France and Ndhlovu could speed away to the try line knowing his healed hamstring was and not going to hold him back.

The three, all part of previous Blitzbok squads that have won the HSBC World Rugby Sevens Series, are not certainties for the Olympic squad, mainly due to their lack of sevens action in recent months

Gans admitted some tension this morning. “I was especially nervous before that first game, but all went well,” he said.

“I am pleased to say that my ankle responded very well today and that’s a great relief. I’m not lying when I say my lungs and legs are crying out, but that was expected. I know that match fitness is needed, that is why we’re playing these matches.

“I realise that I can do better with special awareness as well, but all in good time. The important thing was to get through the day, and I did.” said Gans.

Ndhlovu was also pleased with his effort: “I felt there were some areas where I needed to be sharper, but that improved during the day. It was a good outing; it’s such a blessing to be back on the field. I am not aware of the injury, which showed the good work done by our medical team. I am forever grateful that they nursed me back to fitness. I really loved it out there today.”

Sage thoroughly enjoyed his first run-out on a South African rugby field in more than a year: “Great feeling, but it did not make it any easier,” he said. “The fitness is still an issue, but I am happy that the feel for the game is still there. We will do some reviews back at the hotel and have a look at areas to improve and then come back and try to execute tomorrow.” 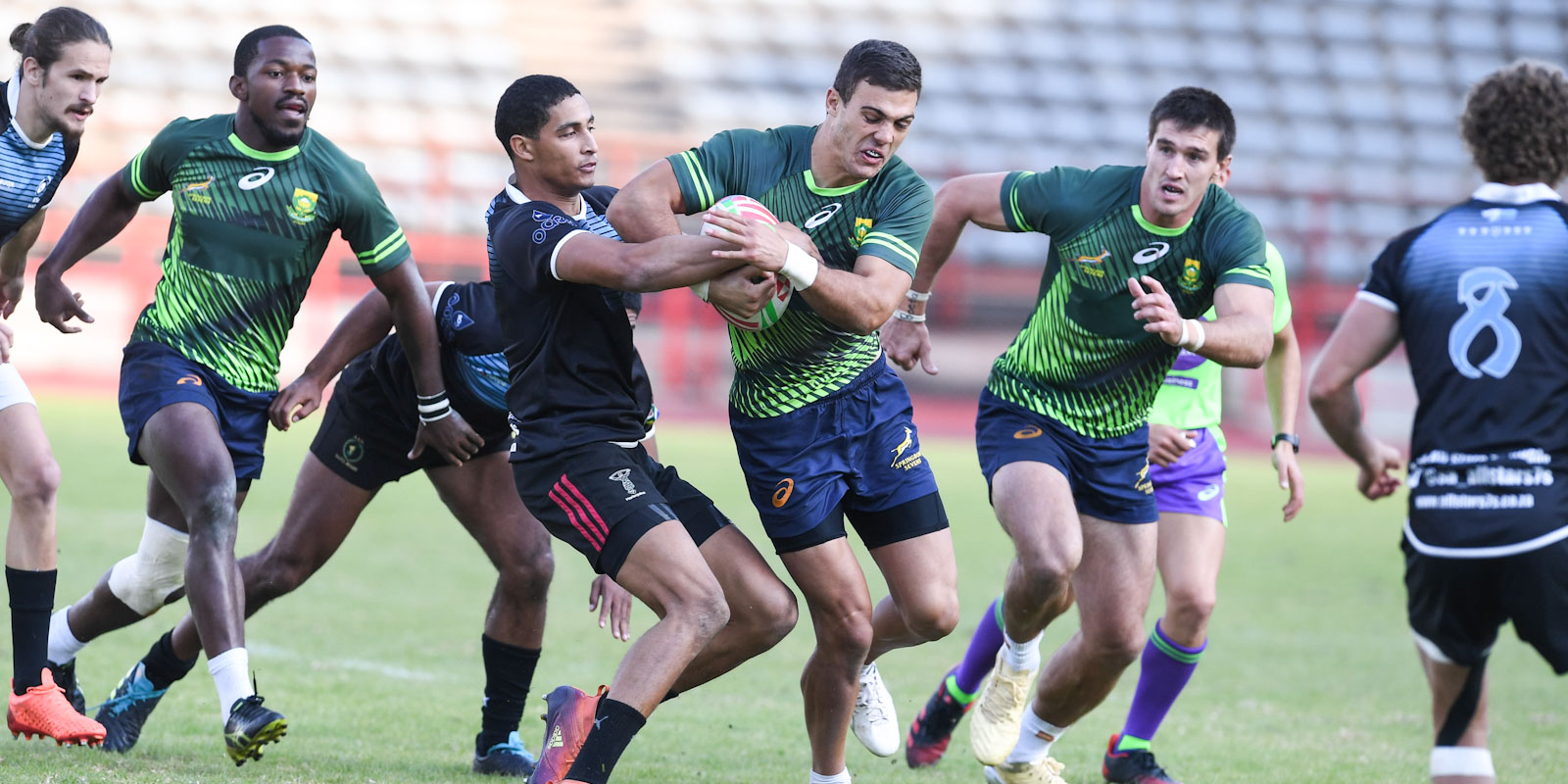 During the four matches played at Johannesburg Stadium, the SA All Stars Rugby Academy provided much needed opposition to the Blitzboks. They opened their day with a 36-0 win with Kurt-Lee Arendse getting a brace while Gans dotted down for a five pointer.

The second match was another blow-out, with the national side winning 38-0, with six different players scoring.

In the third match of the day, two quick tries by Arendse in the first half and another late in the second set up a comfortable 53-7 win over the All Stars. Credit to the Pretoria team, who never stopped trying and were rewarded with a seven pointer near the end of the match.

Muller du Plessis scored twice in the fourth match, with Ndhlovu also crossing in the 35-7 victory.

The team will have a live scrimmage session against the All-Stars Academy junior side on Saturday before a series of matches later in the afternoon.

In just over 30 days from now, the Springbok Sevens team – in the colours of Team South Africa – will start a long-haul flight to Japan, with the gold medal in Rugby Sevens at the 2021 Olympic Games in Tokyo their main aim.

DHL Western Province reinforced their status as the favourites to clinch the Women’s Premier Division title this season as they secured their sixth successive win in a thrilling round in which the EP Queens stunned the Border Ladies and the Boland Dames earned their second win a row.

It's the big Eastern Cape derby in the Women's Premier Division - live from East London at 14h00.

The Blue Bulls Women have a tough task ahead as they take on Women's Premier Division log-leaders DHL Western Province at Newlands in Cape Town, starting at 13h00.