Invitational side down Toyota Cheetahs in Bloem

The Toyota Invitational side caused a bit of a shock when they defeated the Toyota Cheetahs 43-35 in an entertaining exhibition match played in Bloemfontein on Saturday afternoon, after leading the home side 22-21 at halftime.

The game was an entertaining affair, with the Invitational side scoring six tries, five conversions and a penalty goal to the Toyota Cheetahs' five converted tries.

It was the composite side who turned things around with a passage of good play just before halftime, when they grabbed a narrow a one-point advantage, and they never looked back after that.

The Toyota Invitational side, coached by two former Springboks in Ricardo Loubscher and Daan Human, were full value for their victory as they played with an attacking intent from the start, starving the home side of quality ball and field position.

Loubscher, who was Springbok assistant coach from 2012 to 2015, heads up the Cheetahs Academy and Human is the current Bok scrum coach.

EP Elephants flyhalf Inny Radebe had a good game for the winning team as he initiated most of their attacking moves, while their pack - with the Toyota Cheetahs hooker Marnus van der Merwe and Emirates Lions loose forward Roelof Smit very prominent - had the better of the forward exchanges. Ruan Pienaar clears the ball for the Toyota Cheetahs.

With Human in the coaching stable of the opposing side, it was also no surprise that the home side struggled to get any good measure of dominance in the set phases.

The Free Staters were the first to register points on the scoreboard when former Junior Springbok flyhalf Brandon Thomson was on hand to receive a deft pass from Springbok midfielder Frans Steyn, allowing him to score under the posts for a converted try (7-0).

But the team in navy blue struck back soon thereafter when Van der Merwe was the beneficiary of a powerful lineout maul to score the first of his two tries.

However, the Toyota Cheetahs were soon on the scoreboard again when No 8 Juandre Rudolph reacted quickest to score with no defender in sight following a grubber kick into the goal area, with Pienaar on target with the conversion.

DHL Stormers wing Leolin Zas then demonstrated great awareness and skills to juggle the ball while in tackle contact to score for the Invitational team and with Radebe adding the extras, they were suddenly within two points of the hosts at 14-12.

Dries Swanepoel (outside centre) punished the combined side for a lapse in their defence and when Ruan Pienaar converted the Toyota Cheetahs' third try, it spelled danger for the visitors with the home team 21-12 in the lead heading towards halftime.

A Radebe penalty goal brought the scores to 21-15, and with the halftime hooter in the background it was Van der Merwe who handed he initiative and the halftime lead to the Invitational side (22-21). 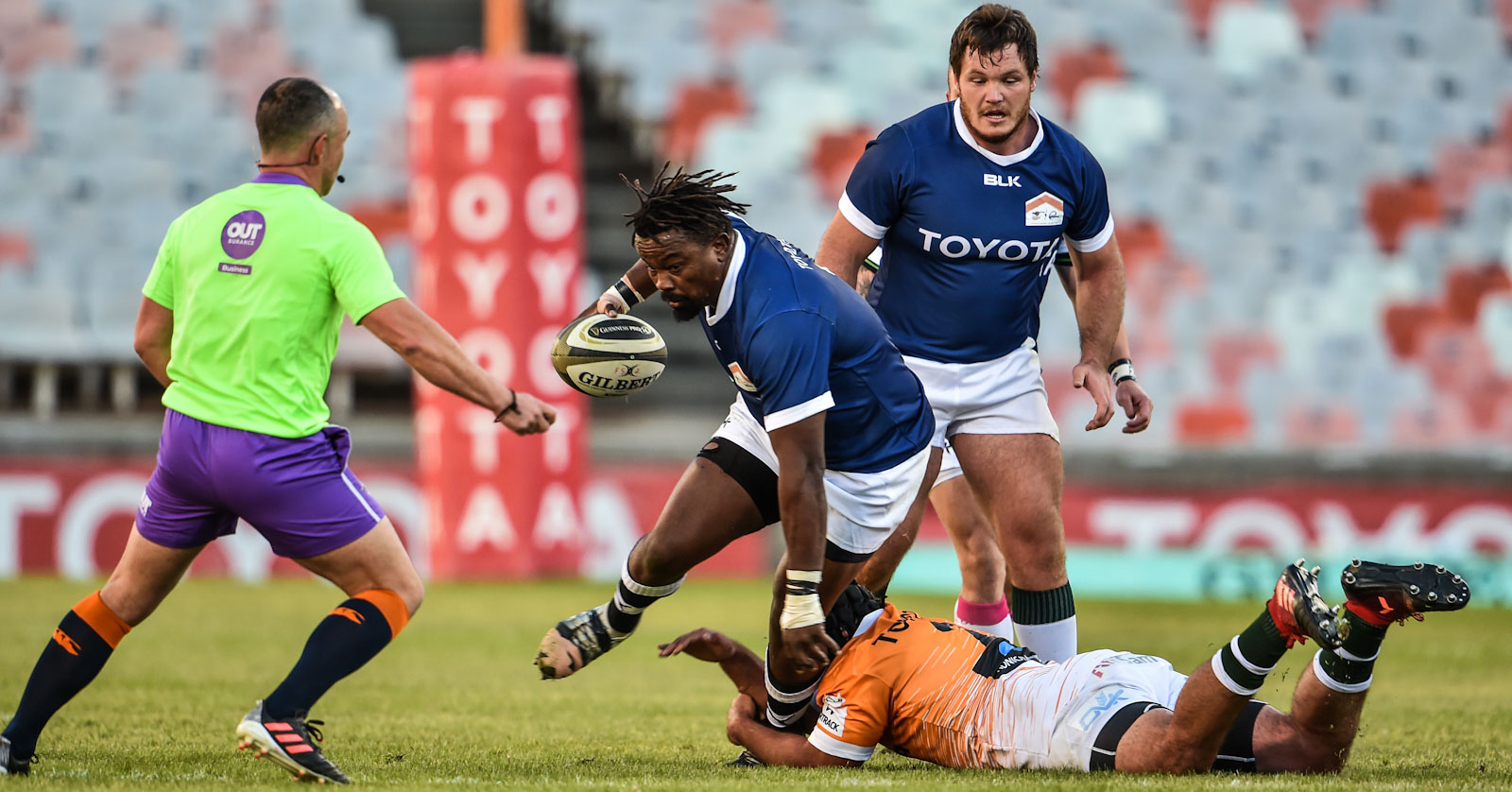 Cell C Sharks prop Kwezi Mona on the charge for the Toyota Invitational side.

Loubscher's charges then made the home side pay for poor defence when, barely a minute into the second half, Emirates Lions speedster Jamba Ulengo took a short inside pass to burst over the whitewash, allowing Radebe to land another beautifully struck conversion to increase their lead to 29-21.

Shimlas midfielder Shayne Bolton also went over a few minutes later to hand them a deserved 15 points lead with 25 minutes of play still left on the clock and the score now at 36-21 in their favour.

To compound matters, Hawies Fourie's team was then reduced to 14 men in the 64th minute when replacement prop Conraad van Vuuren was red carded for foul play.

However, despite being a man down, they did manage to score their first try of the second half courtesy of impact hooker Louis van der Westhuizen, while Steyn was on target with his conversion. With the score at 36-28 and 10 minutes left on the clock, the match was suddenly a much more lively contest.

To the dismay of the home team, it was the Toyota Invitational side who smothered any comeback attempts by the home side when the Vodacom Bulls' influential fullback Richard Kriel read a lob pass beautifully to intercept and run in under the poles for another converted try.

However, despite the spectre of a looming defeat, the men in orange were the last to strike and brought more respectability to the scoreboard when Thomson scored his second and their fifth try of the afternoon. Steyn's last act of the game was to convert and with that to bring the closing score to 43-35 in favour of the Toyota Invitational side.

DHL Stormers loose forward Johan du Toit, younger brother of Springbok star Pieter-Steph, has been named as captain of a strong Toyota Invitational side for the Toyota Challenge in Bloemfontein on Saturday afternoon.

Junior Springbok coach Bafana Nhleko on Friday named an exciting squad for the second leg of the SA Rugby Academy season, which features the U20 International Series, with Jordan Hendrikse (flyhalf) and George Cronje (No 8) among the headline players.

The moment Springbok supporters have been waiting more than 18 months for, will finally happen next Saturday, when a 45-man Bok squad for the Georgian Tests and the Castle Lager Lions Series is announced.