The win ensured that the Durbanites will remain at the top of the standings after the second round, but the men from Johannesburg will have taken a lot of heart from the way in which they never allowed the hosts to run away with the game.

In fact, at one stage the Cell C Sharks led by 24-5, and the half-time score was 24-12, but the Emirates Lions, with their youthful squad, kept on hammering away and they were rewarded with a four-try bonus point right at the end, while the KwaZulu-Natalians failed to replicate their first half form after the break, mainly due to three yellow cards.

The Cell C Sharks started like a house on fire and kept the visitors under pressure for most of the first half, although the Emirates Lions did well to score two first-half tries.

Jeremy Ward (centre) crossed for the KwaZulu-Natalians’ first try in the fourth minute, but that was partly cancelled out three minutes later when the visitors drove their hooker PJ Botha over from a lineout maul.

Tries by Grant Williams (scrumhalf), from a sharp grubber by his halfback partner Curwin Bosch, and Thomas du Toit (prop) after another good attack by the Cell C Sharks, with Emirates Lions scrumhalf Andre Warner in the sin bin for a professional foul, put the home team firmly in control. 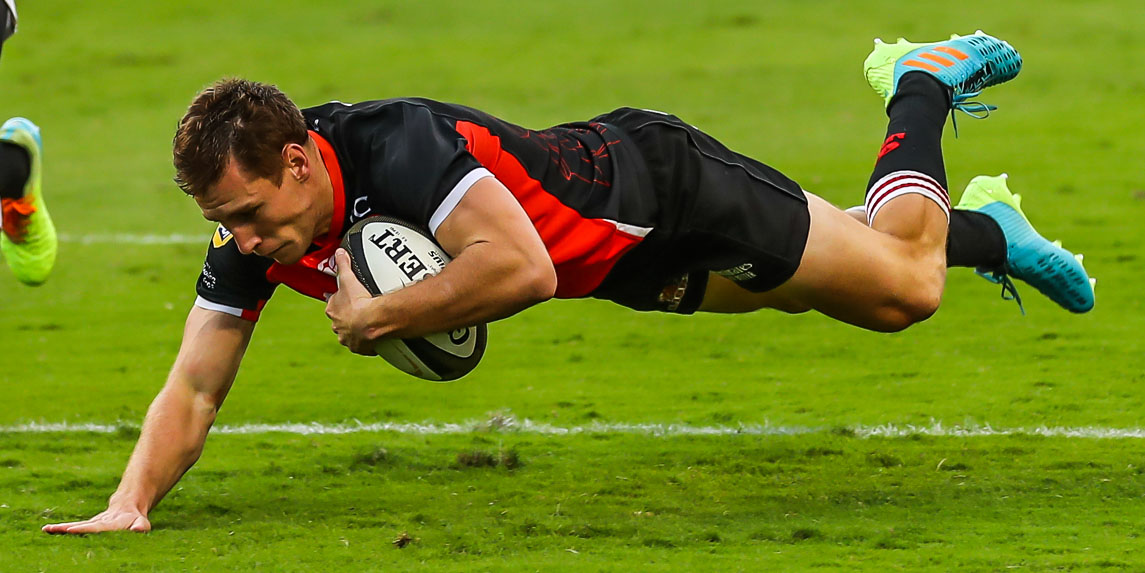 Andre Warner goes over for the Emirates Lions' first try.

Bosch converted all three tries and added a penalty goal to hand his side a 24-5 lead, which shrunk by seven when Warner finished a great counter-attacking move with EW Viljoen (fullback) and MJ Pelser (flanker) prominent.

The Emirates Lions finished the half on the attack in the home team’s 22, but more mistakes meant they failed to capitalize.

They didn’t make the same mistake again early in the second half and kept the home team under pressure, which resulted in yellow cards to Du Toit and Fez Mbatha (hooker) in quick succession.

Although Bosch added another penalty goal, Francke Horne (No 8) went over for the Emirates Lions after a good attacking move from a 5m lineout. With Fred Zeilinga (flyhalf) adding the extras for the visitors, it was an eight-point game with 25 minutes to go.

However, as soon as the Cell C Sharks were restored to 15 players, they got their bonus-point try when Kerron van Vuuren, who had replaced Mbatha, was driven over.

With the Cell C Sharks leading by 15 minutes and the clock winding down, the action dwindled a bit as mistakes crept in on both sides. Henco Venter became the third Durbanite to be yellow carded and the Emirates Lions ensured they left Durban with a bonus point when the impressive Vincent Tshituka crashed over from a lineout drive.