The four men who helped the Boks to lift the Rugby World Cup in 2019 and followed that up with sterling performances for their teams in last year’s Vodacom Super Rugby Unlocked and Carling Currie Cup competitions, are Lukhanyo Am, Steven Kitshoff, Frans Steyn and Duane Vermeulen.

Cornal Hendricks, a dual-code Springbok, and Stedman Gans are the two Blitzboks who made their mark in the colours of the Vodacom Bulls, while Curwin Bosch, Arno Botha and Marco van Staden are the other Springboks on the list of nominations.

Vermeulen and Steyn are up against Hendricks and Bosch for the top honour, the Players’ Player of the Year Award, while a bunch of exciting new prospects also made the list of nominees after a season where South Africa’s top players were forced to face a new opponent in the guise of COVID-19. 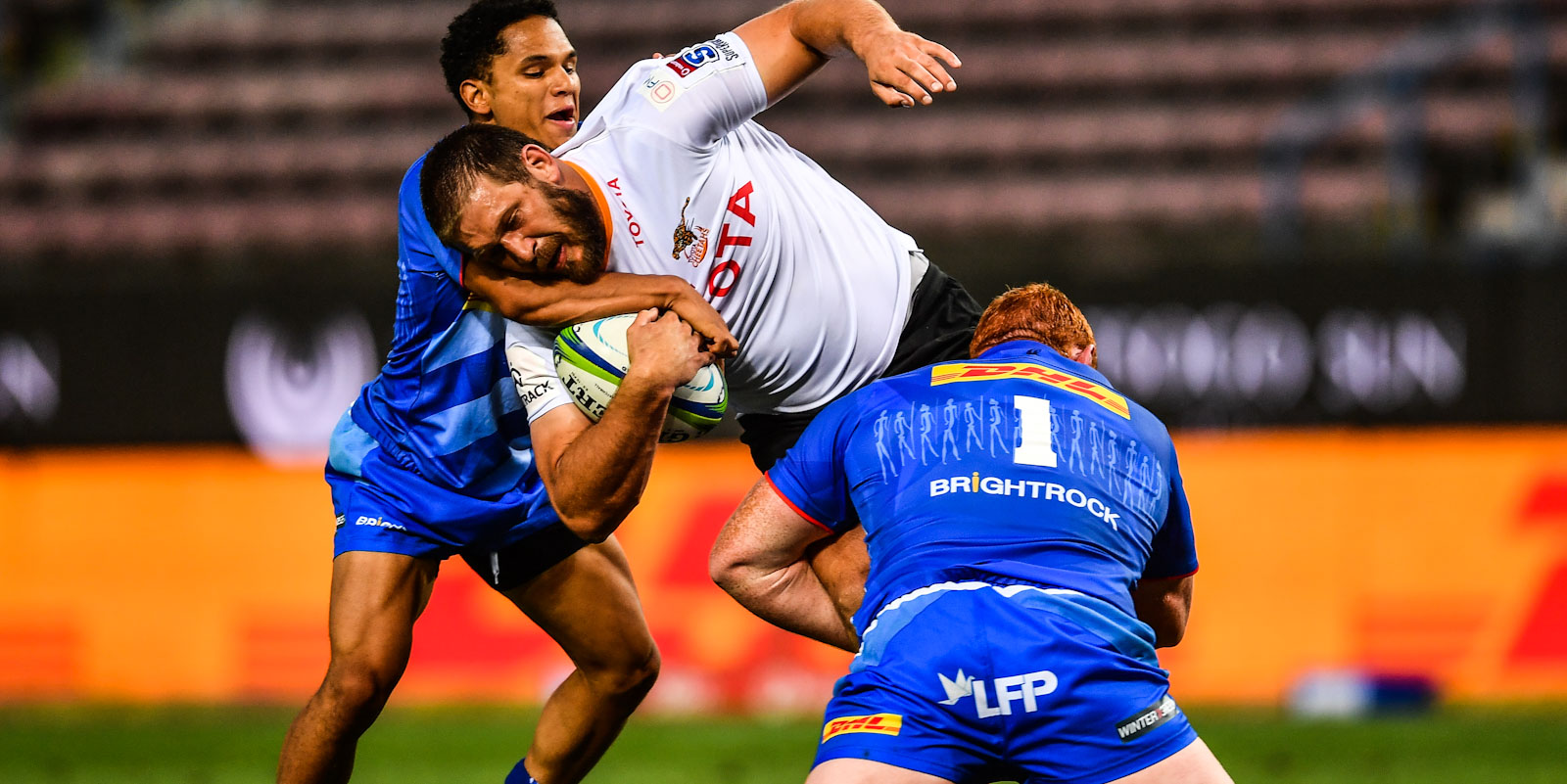 Frans Steyn is tackled by Steven Kitshoff (#1) and Herschel Jantjies

As always, the winners in the six different categories will be decided by the players and the winners will be announced during an awards ceremony that will soon by pinned to the 2021 rugby calendar.

John Smit, a former RWC-winning Springbok captain, MyPlayers board member and the recipient of the 2005 Players’ Player of the Year award, said the recent season was a tough one in many respects.

“Nothing about 2020 was ideal or perfect – every week presented new challenges to players’ fitness, health, performance and mental welfare,” said Smit.

“To be nominated in one of the six categories suggests so much more about these players than just an acknowledgement of their talent and abilities. It also recognises character and mental fortitude in the most uncertain and disruptive season that most professional rugby players have ever been exposed to.”

Cornal Hendricks tries to evade a tackle by Lukhanyo Am

On a personal level, Smit recounted what the Players’ Player Award meant to him in 2005: “There’s something altogether different about the award. You receive this recognition from your peers, and that stands out for me as one of the highlights of my career.

“Great teams consist of individuals who work together toward their collective goals. The individual is never bigger than the team, but the confidence and performance of individual players enable the team to excel.

“As a player, you care about your team and about the value you bring to the environment. So, there is no greater individual accolade in team sports than to be recognised by your teammates and opponents. The annual BrightRock Players Choice Awards celebrate this dynamic between the collective and individual effort.

“I want to congratulate all the nominees. You exemplify the power of the human spirit, and there is no reason for you to doubt the merits of your nomination. Your fellow players – those individuals who know and understand you intimately – decided that you are worthy of their praise.”

Curwin Bosch was the top points' scorer of the season

MyPlayers, the official organisation of the professional rugby players in South Africa, is 100% owned by the players and they play a key leadership role in determining the general strategy and vision. The organisation currently represents all the professional rugby players in South Africa, providing player-driven solutions to improve the lives of their members. This varies from support with managing their rights, finding suitable medical cover, all the way to assisting with their career development.

Blitzbok believes in bouncing back better

‘It’s not how hard you fall, but how quickly you get up’ is a well-used slogan in sport and for Muller du Plessis, this is true in many ways.

Springbok wing JP Pietersen recently called time on an illustrious playing career which saw him making 70 Test appearances for the Springboks and winning a coveted gold medal at the Rugby World Cup in 2007, a year after making his international debut.