The victory over a gutsy Cell C Sharks team (who held a 13-9 lead after a lightning-interrupted first half), came courtesy of a late try by Arno Botha in extra time.

The replacement flanker scored the crucial five pointer after 98 minutes of play and by the time Chris Smith (replacement flyhalf) slotted the conversion, the final act of this crazy final was for referee Jaco Peyper to blow the final whistle.

Earlier, after 80 minutes of regulation play, scores were tied 19-19, and the 20 minutes of extra time (10 minutes each half) was added to cap off a match that also saw a suspension of play after 24 minutes due to lightning close to the stadium.

The first of those 10 minutes yielded nothing bar two missed penalty goals by Cell C Sharks flyhalf Curwin Bosch and Smith. The last 10 minutes was another arm wrestle until Botha finished off a last determined attack by his pack.

In the end, the Vodacom Bulls edged the gutsy visitors in determination and execution, with the Cell C Sharks misfiring from the kicking tee as well as their tactical approach.

Bosch missed five out of his 10 kicks at goal, while the Durbanites opted for a number of attacking lineouts which did not deliver the desired result in the last 20 minutes of regular play – while leading 19-16.

The opening stanza on a wet Loftus Versfeld showed good intent from both sides, but also over-eagerness leading to mistakes. The first scrum was in the third minute already and two minutes later, the first points' scoring opportunity came the way of the visitors.

A poor touch finder by Vodacom Bulls winger Stravino Jacobs had the Cell C Sharks attacking and the home team killed the ball at the ruck. Bosch stepped up and slotted the penalty goal to hand his side the early lead.

The Cell C Sharks did not handle the restart well and found themselves straying offside, but Morne Steyn missed a fairly easy kick.

Bosch got a second opportunity after 11 minutes when Lizo Gqoboka (prop) dropped his bind in a scrum but the 50m effort was wide, and when Steyn was offered another opportunity a minute later, he made no mistake. 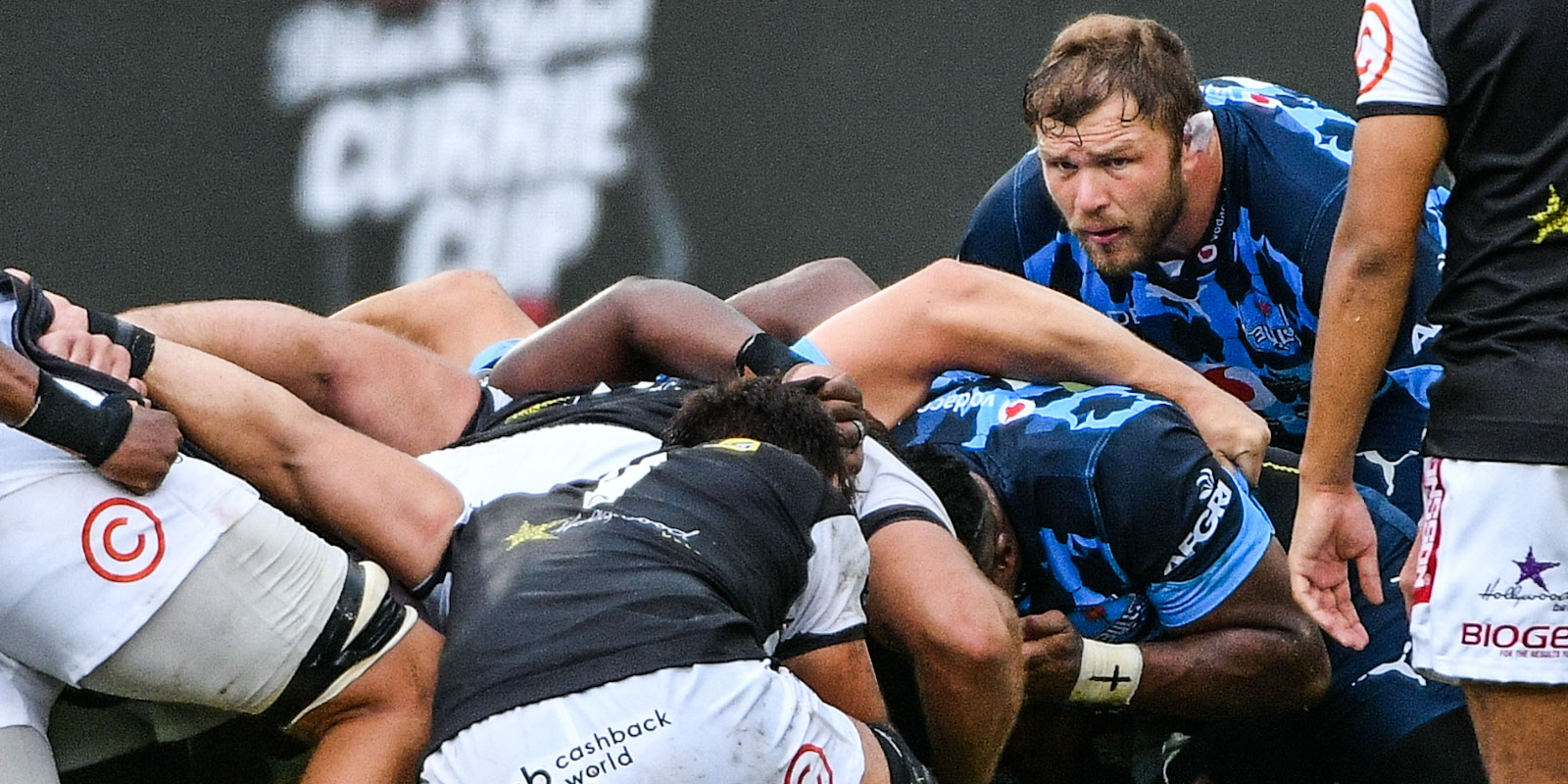 Duane Vermeulen put in a proper captain's innings for the Vodacom Bulls.

A strong defensive effort by Elrigh Louw (flanker) saw the Cell C Sharks penalised and Steyn converted from 40m out with his 720th point in the Carling Currie Cup competition.

Bosch pushed a second effort to the right after 20 minutes and yet again, Steyn was offered the opportunity to exploit that misfortune. Ruben van Heerden (lock) strayed offside in the 23rd minute and the Vodacom Bulls’ experience No 10 kicked his second penalty goal from 40m out to hand the lead to the men from Pretoria for the first time.

Lightning then halted play, but fortunately for all involved, the players were back on the field approximately 30 minutes later.

After the forced break, Bosch had another opportunity, striking a 50m effort that leveled scores again and both sides still had all to play for with 27 minutes gone in the match.

The first real attacking threat came from the Vodacom Bulls when Jacobs ran onto a Steyn kick. The Cell C Sharks tackled desperately and high, and Steyn put his side in front again with his third penalty goal.

Bosch pulled a drop goal effort to the left from 40m out, but got another opportunity 30 seconds later when Jacobs executed a dangerous tackle on Van Heerden. Bosch pushed this 57m effort just past the right upright, but crucially, Steyn then kicked his restart out on the full.

From the resulting scrum on the Vodacom Bulls’ 22m line, the first try of the match was scored courtesy of Cell C Sharks wing Sbu Nkosi. 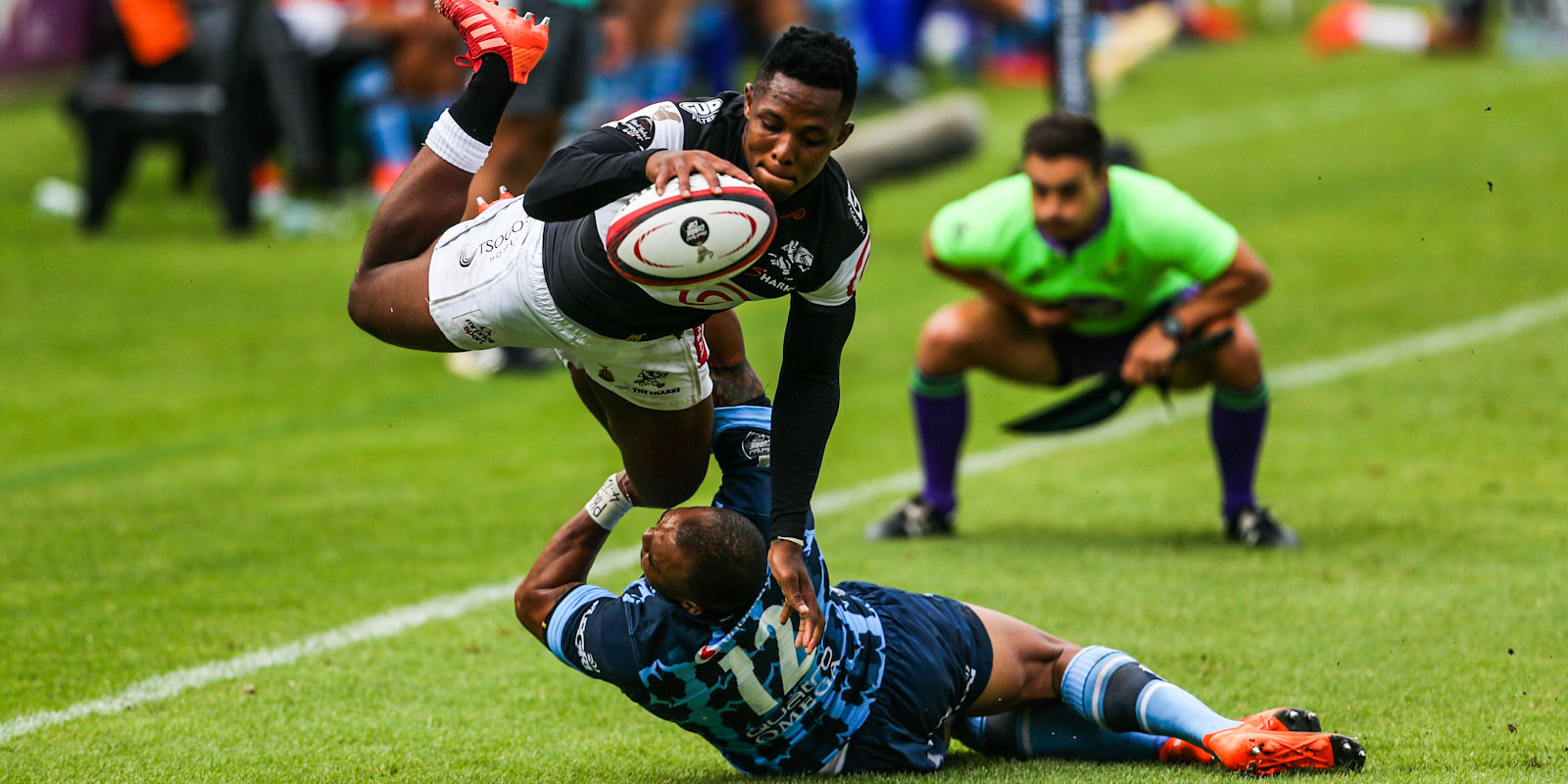 The KwaZulu-Natalians executed a good tactical move to the right, with Aphelele Fassi (fullback) jumping into the line to give Nkosi some space. The Springbok wing took the defence in and out and finished off with a swallow dive for his five-pointer, which Bosch beautifully converted from the touchline to hand his side a 13-9 lead at the break.

The second half again saw the Cell C Sharks start strongest. Bosch kicked a monster penalty goal from just inside his half shortly after the restart when the Vodacom Bulls were penalized for holding onto the ball in a tackle, and the successful kick extended the visitors’ lead to seven points.

The home side attacked well down the left-hand side and Jacobs ran strongly but again the final pass went astray. The home team continued to make small errors and a minute later, Bosch was at it again from 60m after Vodacom Bulls fullback David Kriel held on to the ball in a tackle, but the Cell C Sharks’ No 10 just pushed his effort wide.

The Vodacom Bulls were starting to ask questions on attack and building some territorial pressure. Some determined defence by the Cell C Sharks rushed the home side into mistakes though and that often resulted in releasing the pressure.

Ill-discipline by Ruan Nortje (lock) – jumping across the lineout – gave Bosch another chance from 40m out and this time he made no mistake. With 25 minutes left, the Cell C Sharks’ lead was 10 points.

The Durbanites held sway on the ground as well and crucial turn-overs saw the Vodacom Bulls’ attacking plays come to nothing.

Vodacom Bulls Coach Jake White called in the re-enforcements with a rash of replacements, which struck gold when the Botha crashed over from close range. Twice the men in blue opted not to go for posts, first taking an attacking lineout and then a tap penalty by Duane Vermeulen (No 8), after which the Springbok flanker barged over.

Steyn converted to cut the lead to three points with 15 minutes to play.

The Cell C Sharks then opted to force three consecutive attacking lineouts in a hope to close out the game (all within Bosch's range), but failed to cross the tryline every time before Bosch tried a second drop goal, which also went wide.

The Vodacom Bulls, boosted by that gallant defensive effort on their line, worked their way up the field in the final minutes.

Smith, who took over from Steyn just minutes earlier, kicked an important penalty goal with one minute left to tie the scores, but when offered another opportunity to seal the win three minutes after the final hooter, he pulled it to the left and extra time was the result.

Bosch had the first opportunity of scoring in the first half of extra time, but pulled it left from 45m out. Smith then had a 51m effort two minutes later, but that went to the left as well.

Scoring opportunities were few and far in between in the last couple of minutes of the half and after 90 minutes, the 19-19 score line was still intact and the Carling Currie Cup winner unconfirmed.

Botha then sealed the deal and the status of the champions with his second try. Numerous carries by the Vodacom Bulls saw Botha’s determination rewarded and when he stretched out over the line in the final minute, it was all over. Smith converted for the 26-19 win.

World Series to conclude with Cape Town Sevens in ...

The HSBC Cape Town Sevens will take on a new mantle after World Rugby announced that the popular event in the Mother Cit...

World Rugby has made the difficult decision to recommend the postponement of Rugby World Cup 2021, scheduled to be hoste...

The list of nominations for the SA Rugby Player of the Year Awards for 2020 has a distinct blue tinge to it, with the Vo...

SA Rugby announced on Monday that coaches, parents and players from schools across the country will be invited to a seri...

Former Junior Springbok star scrumhalf Jaden Hendrikse will start in a settled Cell C Sharks team when they take the field in the Carling Currie Cup final against the Vodacom Bulls on Saturday, in the only change to Sean Everitt’s starting team.

It was a proper humdinger - re-live the Carling Currie Cup Final here.