Greens’ forward power and kicking game was a deliberate plan, said their coach Mzwandile Stick: “We wanted to make it as close as possible to a test match.

<< PICTURE GALLERY FROM THE MATCH >>

“We wanted to put pressure in the air and we didn’t want to give them time and space with ball in hand. We wanted to use our set piece and kicking game – that’s what the Springbok game is all about,” added Stick.

The tactics led to three tries for the Green team – by Siya Kolisi, Juarno Augustus and a penalty try – although the primary objective was simply to get back onto the field in a Springbok environment.

“The reason for the game was to showcase the talent and also to build experience and share information between the senior players and the youngsters,” said Deon Davids, coach of Springbok Gold.

“The young players have been exposed to the Springbok environment and it was a wonderful week in our team – and it was from what I hear from team Green as well – with the senior players sharing their experience and offering guidance.

“It was also a fantastic opportunity to look at the players’ ability in training and see where they are in terms of preparation and what is needed. It is very early in the ‘season’ – this was only the second game – and we’ll get more answers from hereon in. 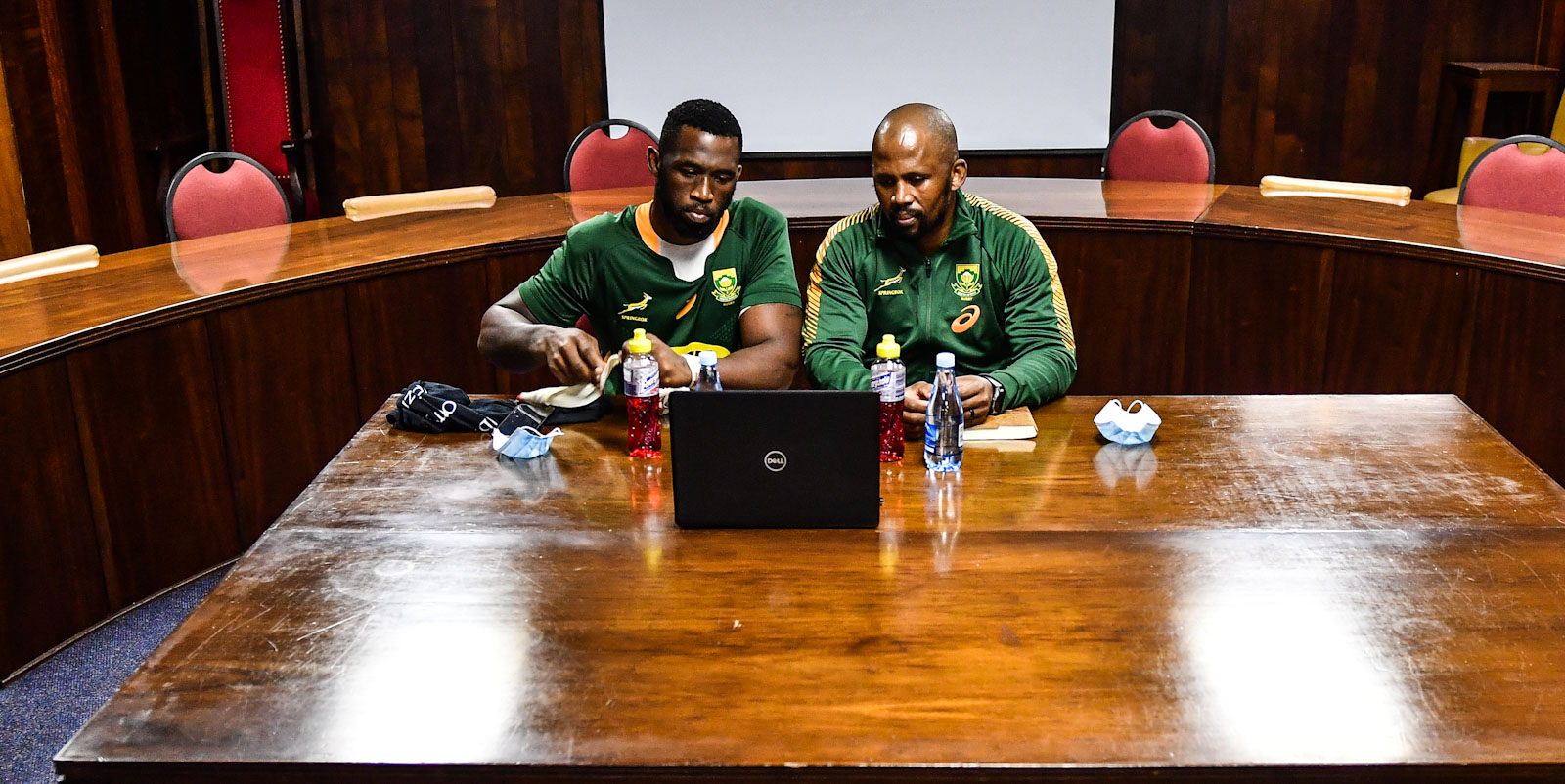 “We hope the players have learned some valuable lessons and will take those back in order to become better players.”

Springbok captain Siya Kolisi also highlighted the value of the interaction with the large number of uncapped players among the 50-strong line-up – and additional ‘young guns’ who had spent the week with the teams.

“It was really special for all of us and for me personally to see the young guys,” said Kolisi.

“I wanted to make sure the guys felt welcome and spent some time sitting down with them. It was special to see them perform tonight.

“We are in a good place as South African rugby with our talent, but we are a long way off in terms of fitness and match readiness from where we were at the World Cup.”

Gold captain and coach, Lukhanyo Am (left) and Deon Davids, "face" the media.

Stick said that the players and management were now preparing if the team’s participation is confirmed for the Castle Lager Rugby Championship in Australia.

“Our job is to make sure that we prepare the players. Since the start of the year and during lockdown there was a lot of information shared between us and the players.

“We are doing everything in our power to make sure the players are ready, but because they haven’t played for six months it’s also very important to manage the players.

“We don’t want to put them under pressure and play them for 80 minutes week-in-week-out; even now you can see players getting small, little injuries. So, the most important thing right now is player welfare and how we look after them.

“If our executive and director of rugby, Rassie Erasmus, decide we have to go then we will do everything in our power to make sure we’re ready to go.”

The domestic season will now resume on Friday with the first round of Vodacom Super Rugby Unlocked.

World Rugby and the France 2023 Organising Committee have announced that the Palais Brongniart in Paris will host the Rugby World Cup 2023 Draw. The Draw will be pushed back from the previously announced date by two weeks to 14 December 2020 owing to the ongoing impact of the Covid-19 pandemic on rugby and event hosting activities.