Arendse hopes to grab opportunity with both hands

Kurt-Lee Arendse is thrilled to run out against the All Blacks at Mbombela Stadium in Nelspruit on Saturday in the Springboks' Castle Lager Rugby Championship opener, and said he hoped to grab the opportunity with both hands when these two arch-rivals cross paths.

Arendse was one of three new players in the Springbok starting lineup for the clash, with the Blitzbok speedster coming in as an injury replacement for Cheslin Kolbe, who is recovering from a broken jaw. The other changes were Malcolm Marx starting at hooker in his 50th Test in place of Bongi Mbonambi, while Faf de Klerk comes in for Jaden Hendrikse at scrumhalf.

“I am very grateful for this opportunity,” said Arendse at the team's base in Nelspruit on Wednesday.

“It’s a real privilege to follow in Cheslin’s footsteps. Cheslin has a good sidestep and he is strong in the air and a very explosive player, so there is a lot to admire about him.”

Of his meteoric rise to the Springbok team after playing for the Blitzboks last year, Arendse said: “I didn’t think a year ago that I would play for the Springboks, so I’m extremely grateful for this chance and hopefully I can grab it with both hands.”

Both Arendse and Springbok utility forward Franco Mostert anticipated an epic encounter against the All Blacks and said they would bring their best despite coming off a series defeat against Ireland. 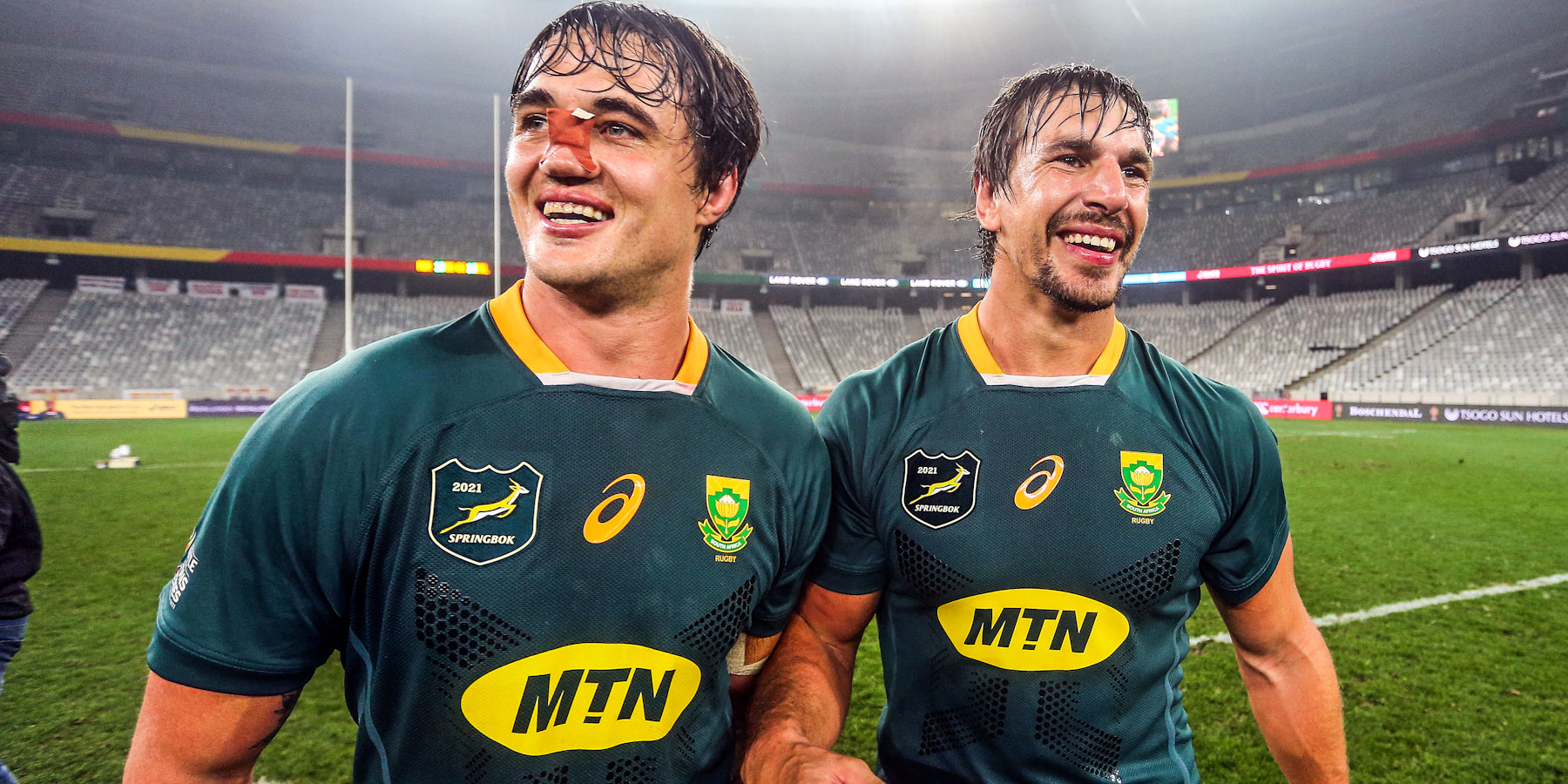 Franco Mostert and Eben Etzebeth after the series victory over the British & Irish Lions last year.

“New Zealand are a skillful side and they like to run the ball, but as a team we are focused on what we have been preparing for” said Arendse.

Mostert added: “We spoke about it this morning that there are no senior players in this squad. There are guys in the side that have faced the All Blacks before, and they know that even with their backs against the wall they are a dangerous team, and they will always bring their best to the field.”

Mostert objected to suggestions that the Springboks will enter the clash and favourites.

“I won’t say there is a favourite for this game to be honest," said the versatile forward, who has played Tests at lock and blindside flanker.

“The All Blacks are world class despite their series defeat against Ireland, and we come off a defeat and two wins in our last three matches, so both teams will be hungry for a win. I think it will be a great match.”

Mostert also looked forward to facing the haka again and said: “It is always a privilege to play against the All Blacks and to face the haka.

“I always enjoy facing the haka because it psyches one up even more for the game, and I think it will be special for the young players who have never faced it before like Kurt-Lee and Salmaan (Moerat – replacement lock).”

Springbok coach Jacques Nienaber made three changes to his starting team that ran out for their final Test against Wales for their opening Castle Lager Rugby Championship fixture against New Zealand in Nelspruit on Saturday, where Malcolm Marx will earn his 50th Test cap.

Every player that was part of the Springbok Sevens squad that won the Commonwealth Games gold medal this weekend had a different route to get to the final at Coventry Stadium down the road from Birmingham, and two of these, Shaun Williams and Mfundo Ndhlovu, emerged as unlikely heroes of the Blitzboks’ triumphant campaign.

The President of SA Rugby, Mr Mark Alexander, paid tribute to Tommy Esterhuizen, a former national rugby player in the apartheid era, who passed away earlier this week.

Relief and gratitude for Powell in Birmingham

Springbok Sevens coach Neil Powell praised all 13 members of the Blitzbok squad for their superb performance at the Commonwealth Games in Birmingham this weekend, culminating in a golden result at Coventry Stadium on Sunday night where they comprehensively beat Fiji in the final.

The Springboks realise the importance of delivering strong set pieces as they face the massive task of taking on the All Blacks in back-to-back Castle Lager Rugby Championship Tests in the next two weekends.

Pollard: Boks will use opportunities when they arise

Handré Pollard said the Springboks were excited about the challenge of lining up against the All Blacks in Nelspruit on Saturday, in their opening Castle Lager Rugby Championship clash, and added that although they have a set game plan, they planned to use the opportunities that arise in the match.

Scott Barrett back for All Blacks in Nelspruit

Two South African Under-18 sides, consisting of 26 players each, have been named to take on their age-group counterparts from France and England in a four-team International Series in Paarl later this month.

Boks on NZ challenge: “These games are massive”

Springbok captain Siya Kolisi and assistant coach Mzwandile Stick anticipated an epic encounter against their arch-rivals New Zealand in their opening Test of the Castle Lager Rugby Championship at the Mbombela Stadium in Nelspruit on Saturday and said there was no bigger challenge for the All Blacks to lift themselves.

The Springbok Women’s Sevens team, who finished seventh at the Commonwealth Games in Birmingham, will now turn their attention to the World Rugby Sevens Challenger Series on 12-14 August in Santiago, Chile, where they will try and qualify as a core team on the HSBC World Rugby Sevens Series.

Springbok coach Jacques Nienaber made three changes to his starting team that ran out for their final Test against Wales for their opening Castle Lager Rugby Championship fixture against New Zealand in Nelspruit on Saturday, where Malcolm Marx will earn his 50th Test cap.

Pollard: Boks will use opportunities when they arise

Handré Pollard said the Springboks were excited about the challenge of lining up against the All Blacks in Nelspruit on Saturday, in their opening Castle Lager Rugby Championship clash, and added that although they have a set game plan, they planned to use the opportunities that arise in the match.