The Junior Springboks squad for the Under-20 Six Nations Summer Series in Italy was announced on Tuesday, with six players who have Vodacom United Rugby Championship experienced named amongst the group of 30 players.

The Junior Springboks will return to international action as part of an exciting Under-20 Summer Series, competing against the Six Nations’ U20 sides and Georgia in the tournament that will be staged in Italy from 24 June to 12 July.

Vodacom Bulls outside back Canan Moodie, his franchise team-mate Reinhardt Ludwig (lock), the DHL Stormers’ Sacha Mngomezulu (utility back) and Connor Evans (lock), as well as the Emirates Lions duo of scrumhalf Nico Steyn and loose forward Ruan Venter all have gained some valuable Vodacom URC experience in the last few months.

These six players, as well as several others, have also featured for their provincial unions in the Carling Currie Cup, while Mngomezulu, Ludwig, Moodie, Steyn, Ethan James (centre, DHL WP), Siya Ningiza (loose forward) all played for the Junior Springboks in last year’s successful U20 International Series in South Africa.

Cell C Sharks scrumhalf Bradley Davids, who also played for the SA U20s in 2021, was not considered for selection due to injury.

Junior Springbok coach Bafana Nhleko said he was pleased with the composition of the squad. He had been working with a 36-player SA Academy squad since Easter at their base in Stellenbosch, before trimming the group to the 30 players who will now don the Junior Springbok jersey. 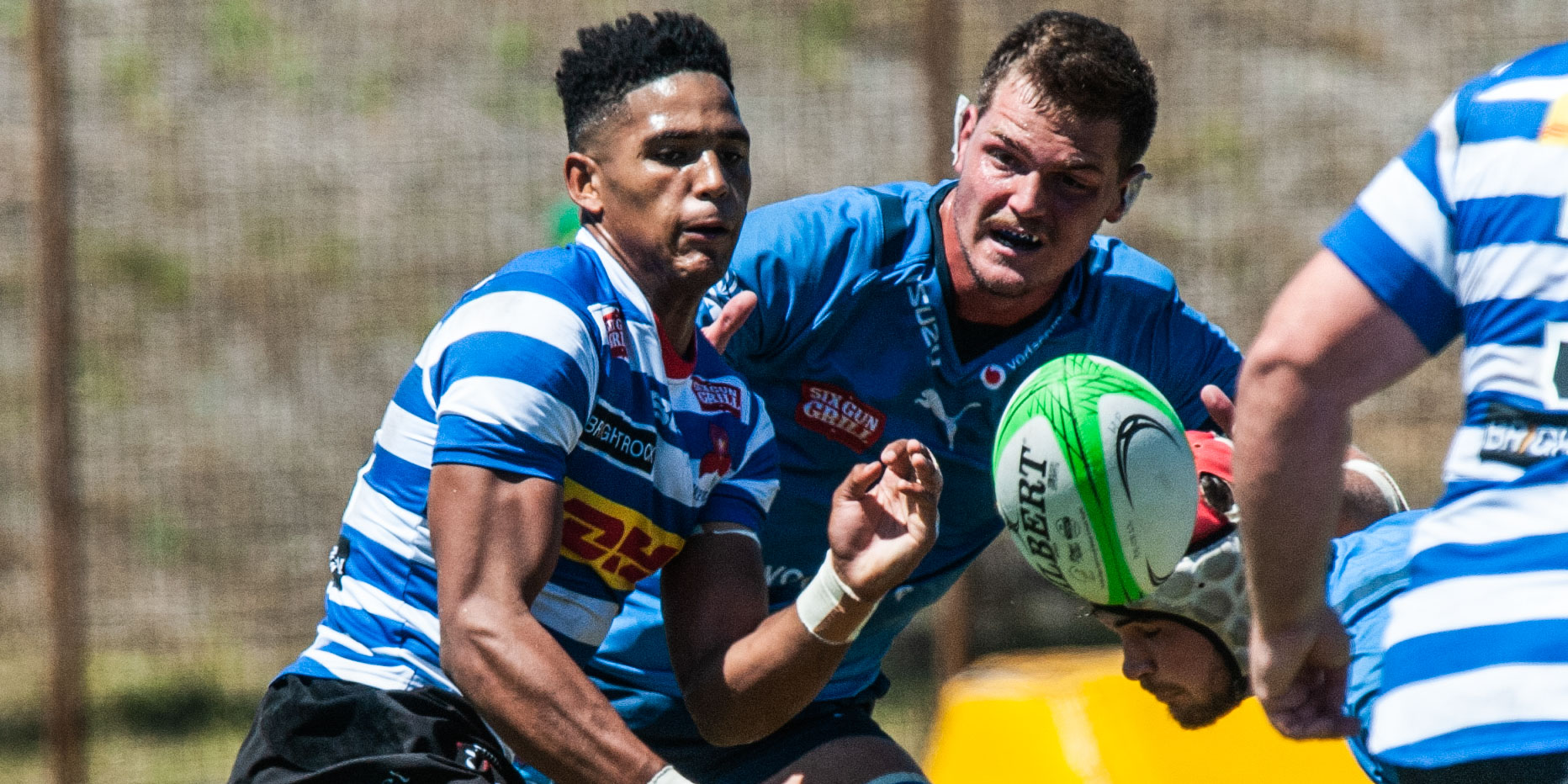 Sacha Mngomezulu in action for the WP U20 team earlier this year.

“I believe we have a well-balanced and competitive squad,” said Nhleko.

“We are grateful for the domestic Under-20 competition earlier this year that gave us an opportunity to see the players and select the Academy group. We have a few guys who have gained valuable experience in the senior ranks, as well as a number of returnees from last year’s programme.

“Putting in the hard work on the training field is one thing, but actually playing in real matches, especially against experienced senior players, provides even better preparation.

“It was good in terms of seeing how we handle pressure situations and execute our plans against highly organised teams, hence the training matches against the likes of the DHL Stormers, DHL WP, Windhoek Draught Griquas, and Toyota Cheetahs, to test the players in proper match conditions.

“Apart from working with the players in what was a very talented Academy squad, we wanted to give the players an opportunity to see how they handle the quality, intensity and physicality of playing against a number of Carling Currie Cup teams, which is a step up.

“The Six Nations teams have the benefit of regular international competition between themselves, so other than our intensive high performance programme, we had to find a way of offering quality game-time to our group.” A final training exercise against Maties in Stellenbosch is planned for Thursday, and squad will remain at the Stellenbosch Academy of Sport until their departure to Italy in two weeks’ time.

The Junior Boks will open their Summer Series commitments against England on Friday, 24 June, and that will be followed by their second match on Wednesday, 29 June against Ireland.

The South Africans will complete their pool fixtures on Tuesday, 5 July against France before playing a final cross-pool fixture one week later, on Tuesday, 12 July, with their opponent to be determined according to the final standings.

Junior Springbok squad for the U20 Six Nations Summer Series in Italy are:

Junior Springbok head coach Bafana Nhleko has paid tribute to his conquering side for their eagerness to learn and impro...

Catch the Junior Boks' final match in the U20 Summer Series, at 21h00 against Wales from Treviso in Italy, live here as ...

Junior Springboks head coach Bafana Nhleko has made four changes to his starting pack and rotated his scrumhalves for Tu...

Zas and Nortje walk away with Vodacom URC awards

DHL Stormers wing Leolin Zas scored 11 tries over the course of the regular season to end the campaign at the top of the charts, while Vodacom Bulls lock Ruan Nortje takes home an award which recognises the player who has racked up the most minutes over the 18 rounds of the Vodacom URC.

Jordaan and Hele back in Springbok Women squad

Two former SA Rugby Women’s Player of the Year winners, Zenay Jordaan and Aseza Hele, will join the Springbok Women squad for the first time this year when they assemble in Stellenbosch to prepare for the Rugby Africa Women’s Cup later this month.

The Vodacom Bulls have jetted out to Dublin, where they will take on Leinster in their Vodacom United Rugby Championship semi-final at the RDS Arena on Friday night.

DHL Stormers and Vodacom Bulls into the Final Four

The DHL Stormers and Vodacom Bulls had to work hard in their Vodacom United Rugby Championship quarter-finals on Saturday, but in the end did what was needed to book their places in next weekend’s semi-finals.

The weekend’s penultimate round of Carling Currie Cup matches produced another bag full of high drama, with Windhoek Draught Griquas pulling off a stunning comeback win over DHL Western Province, the Airlink Pumas winning their cat fight with the Toyota Cheetahs, and the Sigma Lions finishing their season on a winning note against the Cell C Sharks in Durban.

If there was ever a player that could kill off South African hopes and dreams in the Vodacom United Rugby Championship, it is Leinster’s mercurial flanker Josh van der Flier.

Zas and Nortje walk away with Vodacom URC awards

DHL Stormers wing Leolin Zas scored 11 tries over the course of the regular season to end the campaign at the top of the charts, while Vodacom Bulls lock Ruan Nortje takes home an award which recognises the player who has racked up the most minutes over the 18 rounds of the Vodacom URC.