With three rounds remaining and the top two positions on the Carling Currie Cup log a two-horse race between the Vodacom Bulls and the Toyota Cheetahs, the spotlight now turns firmly to the fight for the two remaining playoff spots.

The Vodacom Bulls kick off the weekend’s fixtures on Friday evening when they host the Airlink Pumas in Pretoria, where the starting time is 19h00.

This match is followed by two games on Saturday: Windhoek Draught Griquas tackle the unbeaten Toyota Cheetahs in Kimberley (14h30), while the Sigma Lions are playing at home against DHL Western Province in Johannesburg (17h00).

The Vodacom Bulls, who are the defending champions, currently lead the standings on 42 points from their eight wins from 10 games, which is just one point more than the Toyota Cheetahs, who have won each of their nine matches so far in this campaign.

For now, the race for the two remaining playoff spots – for positions three and four – is a clear three-way fight, with the Cell C Sharks currently third on 24 points (10 games), Windhoek Draught Griquas sitting fourth on 21 points and the Airlink Pumas in fifth on 20 points, with the latter two sides having played nine games each.

DHL WP occupy sixth position with 13 points from nine games, which gives the side from Cape Town an outside chance of grabbing a play-off spot by winning all their remaining matches, and if other results go their way. The Sigma Lions, still winless after 10 games, complete the standing on five league points.

The playoff-credentials of both the teams from Mpumalanga and the Northern Cape will be heavily tested this coming weekend as they tackle the two leading sides in the competition. The Cell C Sharks have a bye in this round and all three matches will be broadcast live on SuperSport.

Muller Uys in action against the Sigma Lions earlier this year.

In their last outings two weeks ago, the Vodacom Bulls had to pull out all stops to beat a stubborn Sigma Lions 43-37 in Pretoria, while the Airlink Pumas suffered a 17-23 reverse against a determined DHL WP, a result which handed the Cape side their first win in eight matches.

In five previous meetings between the sides from Pretoria and Nelspruit – four of which were staged at Mbombela Stadium – the Vodacom Bulls emerged victorious four times, while the Lowvelders managed just one win – a 44-14 success last January. The team in light blue jerseys won the previous fixture between them at Loftus Versfeld, played last June, by 32-27.

Windhoek Draught Griquas return from a bye, having last played three weeks ago. They did play a training match against the SA Academy side in Kimberley last week, in an effort to shake off the worst rust.

The Kimberley side could only manage one win in five games against their neighbours from Bloemfontein, a 31-10 victory in the Northern Cape in June 2021. The other four clashes between them (three away and one home tie) all ended in favour of their Free State rivals, who will take some confidence into the match.

Two weekends ago, the Toyota Cheetahs racked up their ninth consecutive win courtesy of a 44-15 triumph over the Cell C Sharks in Bloemfontein.

The Sigma Lions will take a lot of heart from their previous outing when they managed to push the Vodacom Bulls all the way in their 43-37 loss at Loftus. DHL WP on the other side will be equally buoyant after they managed to break their losing sequence of seven losses with their success in Nelspruit over the Airlink Pumas.

The Joburg side lead the DHL WP 3-2 in this fixture, although the Cape side have been on top in the most two most recent matches. This includes a 48-36 win in January at the DHL Stadium in Cape Town. The Gauteng side’s last of their three wins in this fixture was a 22-19 home win in December 2020. 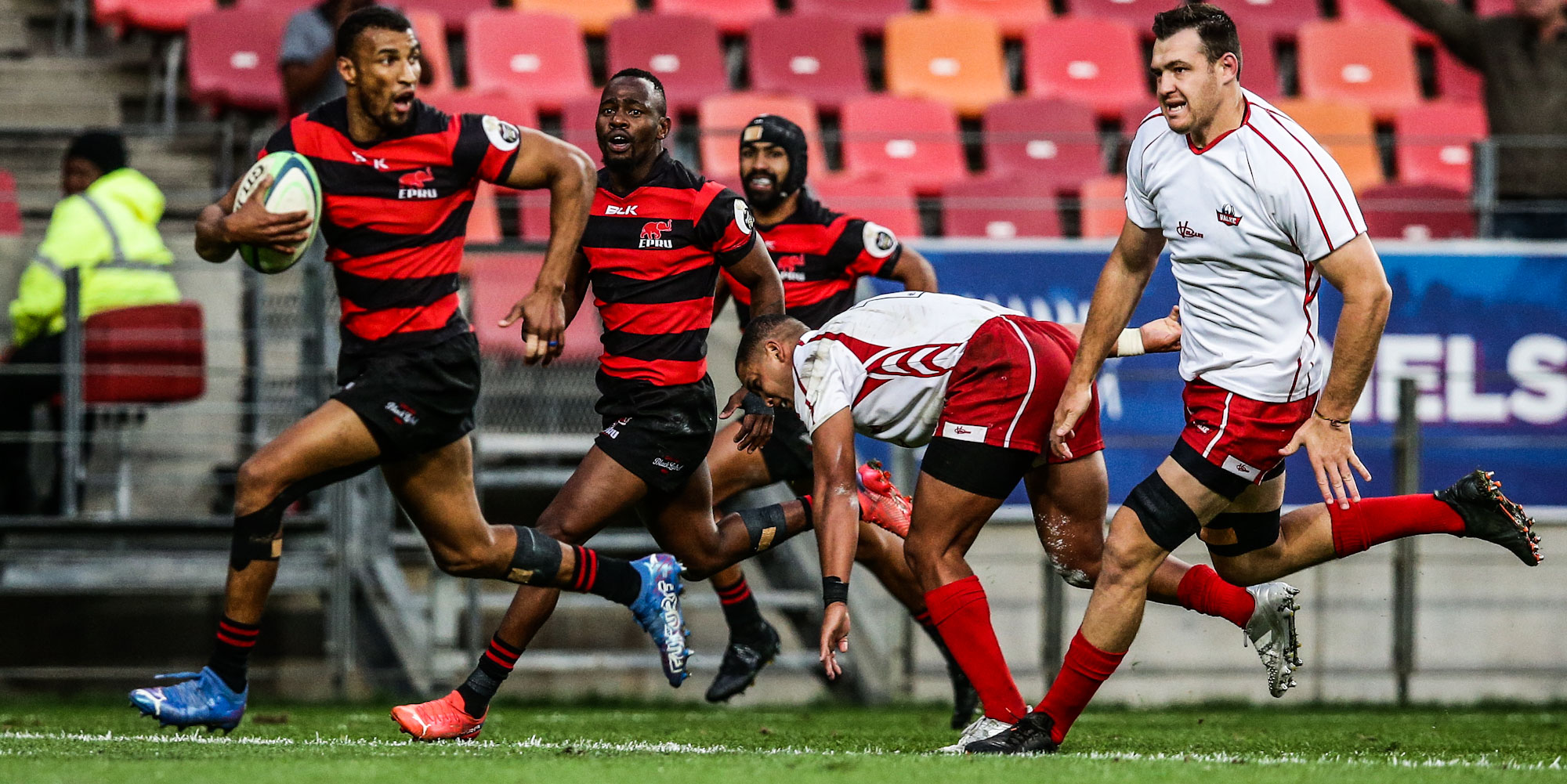 Eastern Province, in action here against the Valke, are leading the race to Premier Division promotion.

The feature match in the Carling Currie Cup First Division this weekend is clash between Eastern Province and the Down Touch Griffons, taking place on Saturday at 15h30 at the Nelson Mandela Bay Stadium, with the two teams currently leading the promotion race to Premier Division promotion.

With only results between the South African teams counting towards the promotion barometer, EP lead the way on 25 points from a full house of five victories. The Griffons follow next with 20 points from their four wins.

Both these teams registered positive results in their most recent fixtures, with EP overpowering the Valke 47-7, while the Griffons outplayed the Leopards 35-25 in their postponed match which took place on Tuesday.

Elsewhere, the SWD Eagles gained a 48-0 triumph over the Zimbabwe Goshawks; the Border Bulldogs went down 35-5 against the Black Lion of Georgia; and Boland Kavaliers delivered a great performance to beat the Simbas of Kenya 45-33 in Wellington.

That brings us back to the next round of fixtures, which will be played over the coming weekend.

Looking back at the three most recent meetings between the two sides sees the Down Touch Griffons leading by 3-0 over EP. The closest the men from the Eastern Cape came to toppling their opponents during this time was a 23-19 home defeat in July 2019.

Two of Saturday’s other Carling Currie Cup First Division fixtures are scheduled for City Park in Cape Town, where the Zimbabwe Goshawks take on the Leopards (13h00) and the Kenya Simbas clash with the SWD Eagles (15h00). The final match kicks off at 15h00 in Wellington, between the Boland Kavaliers and the Black Lion from Georgia.

Individual award winners to be revealed

The Vodacom United Rugby Championship is set for a thrilling conclusion in the next few weeks as the competition reaches the playoff stages, with three South African teams in contention for the inaugural title, while 10 individual award winners are set to be revealed before the grand finale on Saturday, 18 June.

The call from Neil Powell was fairly unexpected and the reason for the call mind-blowing for the 20-year-old Jordan Hendrikse, but the request by the Springbok Sevens coach to join the Blitzboks in London has had the talented flyhalf buzzing with excitement.

The three South African sides who have progressed to the Vodacom United Rugby Championship quarter-finals will keep a keen eye on the Heineken Champions’ Cup final this weekend, to see what Leinster looks like at full strength when the time comes to possibly cross swords later in the playoffs.

After eight months of competition and an enthralling final weekend of league play, the venues for the four Vodacom United Rugby Championship quarter-finals provide an accurate summation of the power spread across the five competing nations.

The Vodacom Bulls won an incident-packed Carling Currie Cup match 31-26 against a fiercely competitive Airlink Pumas in their Round 12 clash on Friday evening at Loftus Versfeld.

Catch the action from the sixth round of the Women's Premier Division live here - matches are scheduled for Friday and Saturday.

Delight for dynamic midfielders who dared to dream