The exciting chase for Carling Currie Cup playoff places will gather pace this weekend with the staging of three matches in Bloemfontein, Johannesburg and Nelspruit respectively.

The action starts on Friday evening when the Airlink Pumas host DHL Western Province at the Mbombela Stadium in Nelspruit from 19h00.

In the first of two matches scheduled for Saturday, the Toyota Cheetahs entertain the Cell C Sharks from 14h30 at the Toyota Stadium in Bloemfontein. This clash is followed by the Jukskei Derby between the Vodacom Bulls and Sigma Lions at Loftus Versfeld in Pretoria, where the kick-off is 17h00.

The Windhoek Draught Griquas have a bye in this round and will no doubt be keeping a keen eye on the proceedings, as their fourth spot on the log is under threat. All the matches will be broadcast live on SuperSport.

The Airlink Pumas are currently in fifth place with 19 points and must be considered favourites for this home tie against second from bottom DHL Western Province, who return to action from a bye in the previous round.

Last weekend’s important 20-10 away win over the Cell C Sharks in Durban means the Lowvelders are now only two points behind Windhoek Draught Griquas, who are sitting in fourth spot with 21 points. However, the men from Kimberley have played nine games to date compared to the pink jerseys’ eight.

A win will see the Nelspruit outfit overtake their Kimberley rivals, which will be a significant move considering there remains only two more games after this round before the semi-finals. 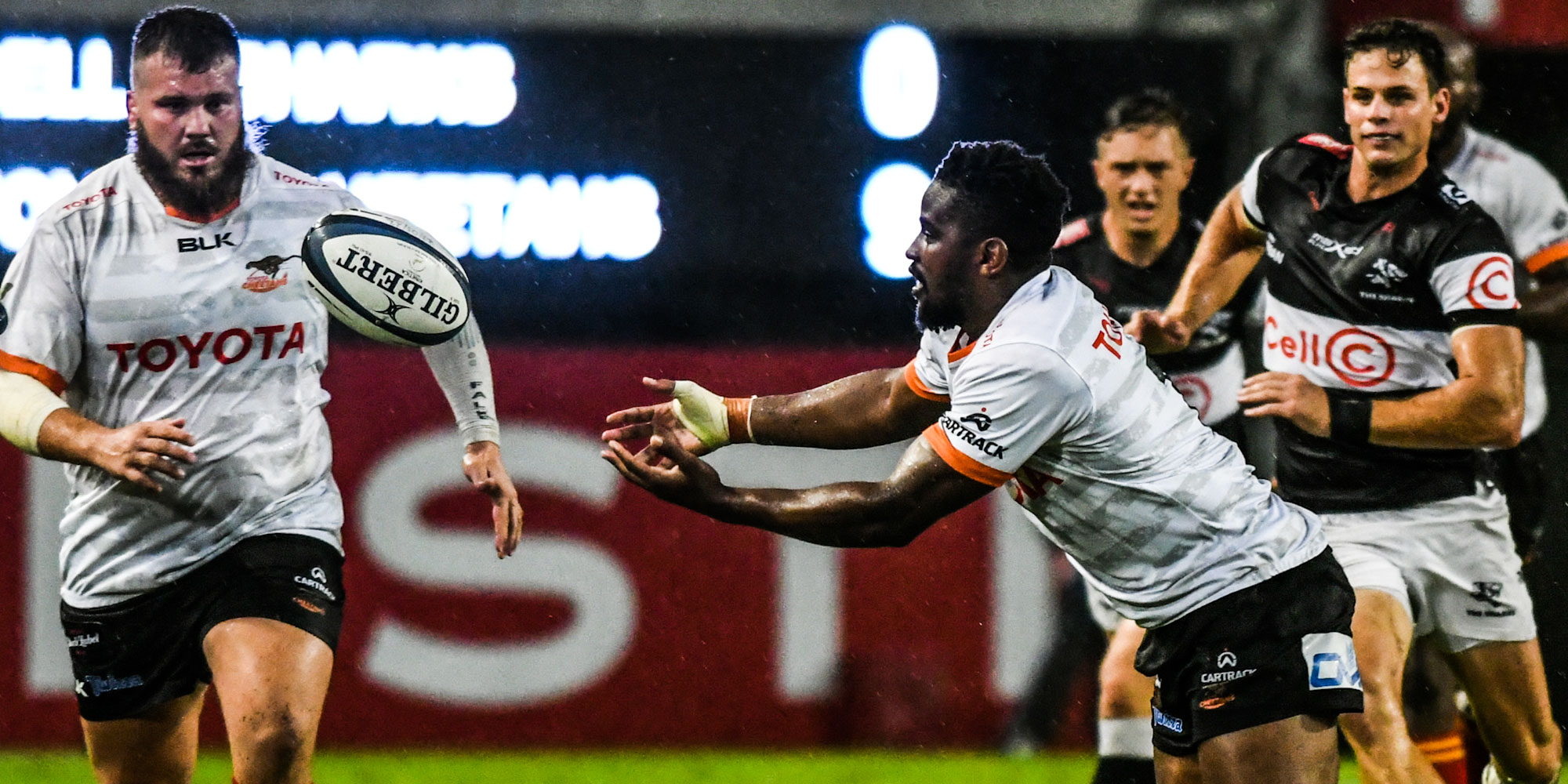 The Toyota Cheetahs' Siya Masuku in action against the Cell C Sharks.

Jimmy Stonehouse’s team are unbeaten in their last two meetings with their Cape opponents following a convincing 37-11 triumph earlier in March in the Mother City plus a pulsating 40-40 draw last August in the DHL Stadium. Before these two results they have lost the previous three fixtures between them, including last July’s corresponding 37-23 loss in Nelspruit.

DHL WP, on the other hand, are desperate to snap a disappointing sequence of seven successive losses.

The early Saturday afternoon clash in Bloemfontein is an equally important one, more so for the third-placed Cell C Sharks (24 points from nine games), who will be keen to create a bit of breathing space between them and the chasing pack on the log.

Meanwhile, the Toyota Cheetahs will be confident of bagging another home win on the back of that hard-fought 35-26 bonus-point away success over the Sigma Lions. That was their eighth win in a row which increased the Free Staters’ current tally to 36 points – just one behind the defending champions, the Vodacom Bulls, who have played one game more.

A glance at the previous five meetings between these rivals reveals a 3-2 advantage to the Free Staters, including a 29-12 victory in Durban two months ago, while the KwaZulu-Natal outfit were on top 47-30 when they last met in Bloemfontein in July 2021.

Loftus Versfeld hosts the last match of the round on Saturday evening when the Vodacom Bulls welcome their Gauteng neighbours, the Sigma Lions. Current form suggesst a comfortable win for the hosts, however, the Joburg side did run the Windhoek Draught Griquas and Toyota Cheetahs very close in their previous two outings.

Dating back to the beginning of last year, the Vodacom Bulls – 48-38 winners over Windhoek Draught Griquas last week – have managed to stack up five straight wins over their Gauteng rivals, including a comprehensive 40-10 away triumph in March and last January’s 26-21 semi-final win at Loftus.

Action from the recent First Division clash between Eastern Province and the Black Lion from Georgia.

The Leopards, last years’ champions, host Eastern Province in Potchefstroom where they are eyeing a third win and EP, in turn, will be aiming to keep momentum going by netting a fourth win in five matches.

Elsewhere, the Valke and SWD clash in Brakpan with the home side determine to bounce back from their recent 25-15 defeat to the Leopards. SWD, on the other hand, suffered a 40-16 reverse against the Down Touch Griffons in the previous round and cannot afford to lose more ground.

The remaining two matches see the Boland Kavaliers entertain the Griffons in Bredasdorp, while Border Bulldogs will be desperate to break their losing duck when they face the Zimbabwe Goshawks in Mdantsane on Sunday. All matches are set to kick off at 15h00.

Georgia’s Black Lion are on a bye this week after they were crowned champions of the inaugural Rugby Europe Super Cup last Saturday, courtesy of their 17-14 triumph over Lusitanos 17-14 in Lisbon, Portugal. The Simbas from Kenya are the other team sitting out this round.

On the combined Carling Currie Cup First Division log, which include the three international teams, the Griffons lead the way with 25 points from five games, and they are followed by the Valke who have 20 points, with EP four points adrift in third spot.

On the Promotion Barometer, consisting of results between the South African teams only, EP are leading the standings on 15 points after three such games. They are followed by the Griffons, Valke and Leopards, all of them on 10 points. And the SWD Eagles and Boland Kavaliers are not yet out of contention on nine points each.

Emirates Lions flyhalf Jordan Hendrikse is just 20 years old, but already he has experienced more as a player than many ...

Individual award winners to be revealed...

The Vodacom United Rugby Championship is set for a thrilling conclusion in the next few weeks as the competition reaches...

The three South African sides who have progressed to the Vodacom United Rugby Championship quarter-finals will keep a ke...

After eight months of competition and an enthralling final weekend of league play, the venues for the four Vodacom Unite...

The three South African franchises that booked their spots in the Vodacom United Rugby Championship play-offs will all t...

The defending champions in the SA Rugby Women's Premier Division, Border Ladies, scored a commanding 39-0 win over the Cell C Sharks Women in Durban in the third round of the national showpiece on Saturday, showing their intent to retain the title they won in 2021.

Catch the action from the third round of the Women's Premier Division live here.

The most capped Blitzbok ever, Branco du Preez, has been included in the 13-man Springbok Sevens squad for the next two HSBC World Rugby Sevens Series tournaments in France and England, in one of four changes to the team that returned from a fifth-place finish in Canada last month.

Seven players without any HSBC World Rugby Sevens Series experience have been named in the Springbok Women’s Sevens squad for their first World Series event since December 2019, when they travel to France this weekend.

"Outstanding" Tshituka named Player of the Month for April

Emirates Lions flanker Vincent Tshituka capped a number of outstanding performances in the Vodacom United Rugby Championship with the Player of the Month Award for April, becoming the first forward to receive this accolade this season.

The race to finish top of the log in the SA Rugby Women’s Premier Division is hotting up with two crucial matches in Round Four of the competition that could have a huge impact to determine who will play in the final on 11 June.

The Airlink Pumas outside chance of gaining a playoff spot received a setback on Friday evening when they lost their home Carling Currie Cup match 23-17 against the DHL Western Province in Nelspruit.

The most capped Blitzbok ever, Branco du Preez, has been included in the 13-man Springbok Sevens squad for the next two HSBC World Rugby Sevens Series tournaments in France and England, in one of four changes to the team that returned from a fifth-place finish in Canada last month.