Positive finish in Vancouver only eases some pain for Powell

Six tries against France and a victory over New Zealand in their last two matches at the HSBC Canada Sevens in Vancouver, as well as an improved finish than in Singapore a week before, pointed to a positive ending for the Blitzboks at the end of their trip to Asia and North America, but the overall performances were below par and can’t be sugar coated.

That was the frank assessment of Springbok Sevens coach, Neil Powell, at the completion of the fifth and sixth legs of the HSBC World Rugby Sevens Series in Singapore and Vancouver, where the Blitzboks saw an erosion of their overall lead on the standings to Argentina and Australia.

South Africa now lead the World Series by only six points on 111, with Argentina (105) and Australia (100) closing in. The Blitzboks could only harvest 23 league points in the last two tournaments, while Argentina gathered 35 and Australia 34 points over the same period. Three tournaments remain, in Toulouse and London at the end of May, and Los Angeles late in August.

Powell was not looking at the standings only in his assessment of the Blitzboks’ performances – after winning all three their pool matches on the first day in Vancouver, the South Africans lost to Samoa in the Cup quarter-final before rebounding with wins against France and New Zealand to finish the tournament in fifth place overall – click here for a wrap of the action from day two.

“It was a tough two weeks and not something that we are happy about as a team,” said Powell.

“We will have to ask tough questions to ourselves on what happened and what areas we need to improve on. As individuals, we will have a serious conversation on our performances, but also as a team, where we did not function as we should have.

“The way we finished in those last two matches remains a positive, we really turned it around. But that does not detract from those weak moments, and we need to hard on ourselves to make sure it does not happen in the next two tournaments.”

The squad did not show their usual consistency in performances and Powell said it will need to be addressed: “We had hot and cold moments and sadly those cold ones proved crucial and very costly. It is something we need to look at – the players and the coaching staff alike – to see how and why it happened and what can be done to prevent that.”

Powell pointed to the mental readiness of the squad as well: “This is a physical and well as a mental game and at times we did not mentally respond the way we used to.”

Despite the disappointments, there were some positives for Powell too, which included the return of Fiji, Samoa and New Zealand to the World Series after missing out in the early rounds due to the pandemic.

“They do test you in different ways and areas and some of the young guys in the team needed to learn and experience what those were,” he said.

“You can tell them what to expect, but they might not believe you until they experienced it themselves, especially the physicality in contact areas. We needed to play against them and although we lost two (Fiji and Samoa) and won the one (New Zealand) we can be successful against them if we implement correctly.” 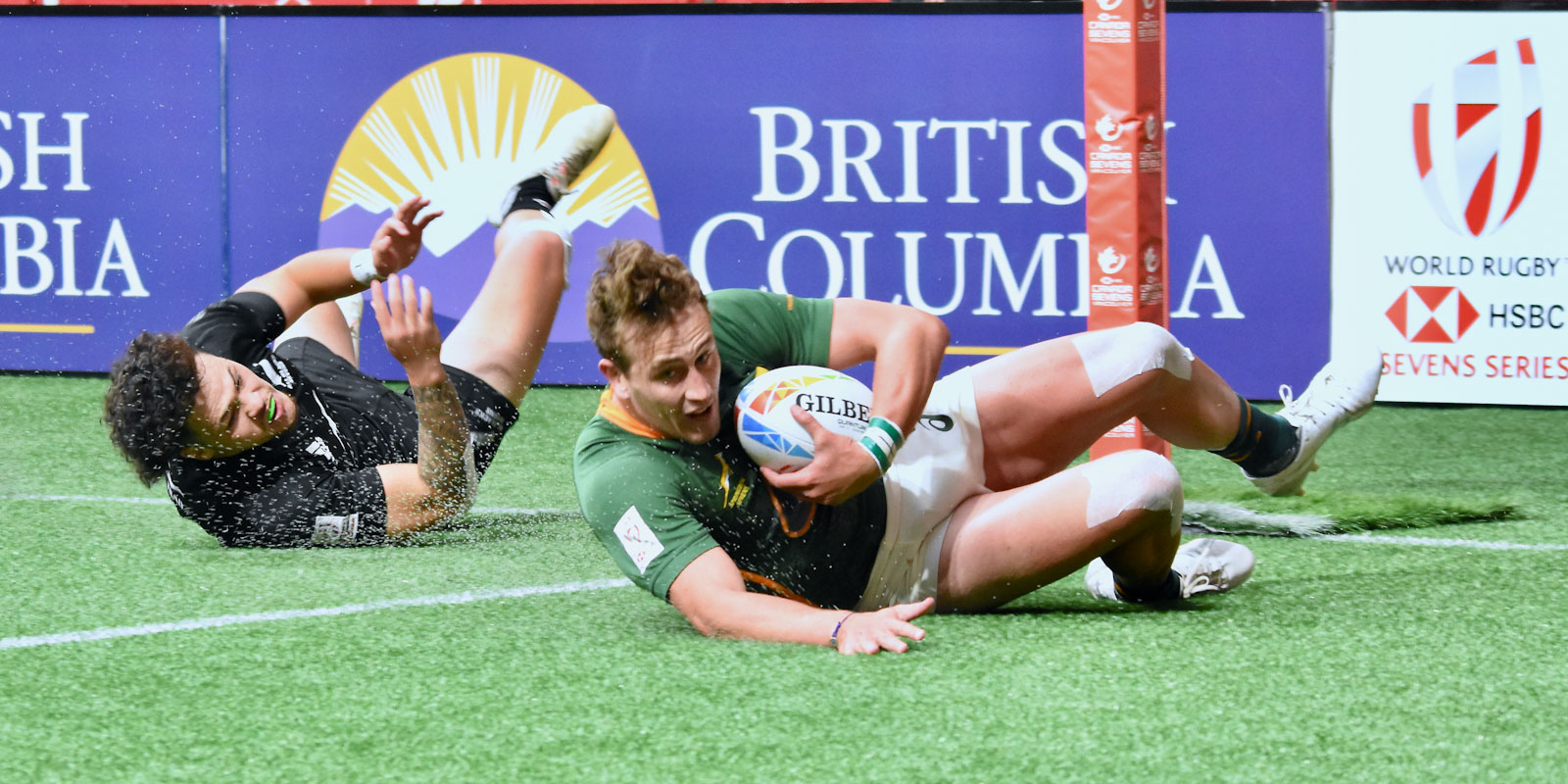 For James Murphy, who scored the winning try against New Zealand, there were mixed feelings, but he was proud of the comeback effort.

“From an individual point of view, this was about grabbing opportunities presented and I am pleased with the way I reacted,” said Murphy, who didn’t feature in Singapore and only joined the squad in Vancouver as an injury replacement.

“It is always great to finish off a try like that where the whole team did their bit.”

Murphy feels a better start to their matches will be crucial for the Blitzboks: “We lost to Samoa – and credit to them – by playing against ourselves as well.

“That first half was horrible. We conceded penalties, we gave the ball away and allowed them too much of a lead. We need to cut out those errors, because when we did against France and New Zealand, we could stay in the game.” 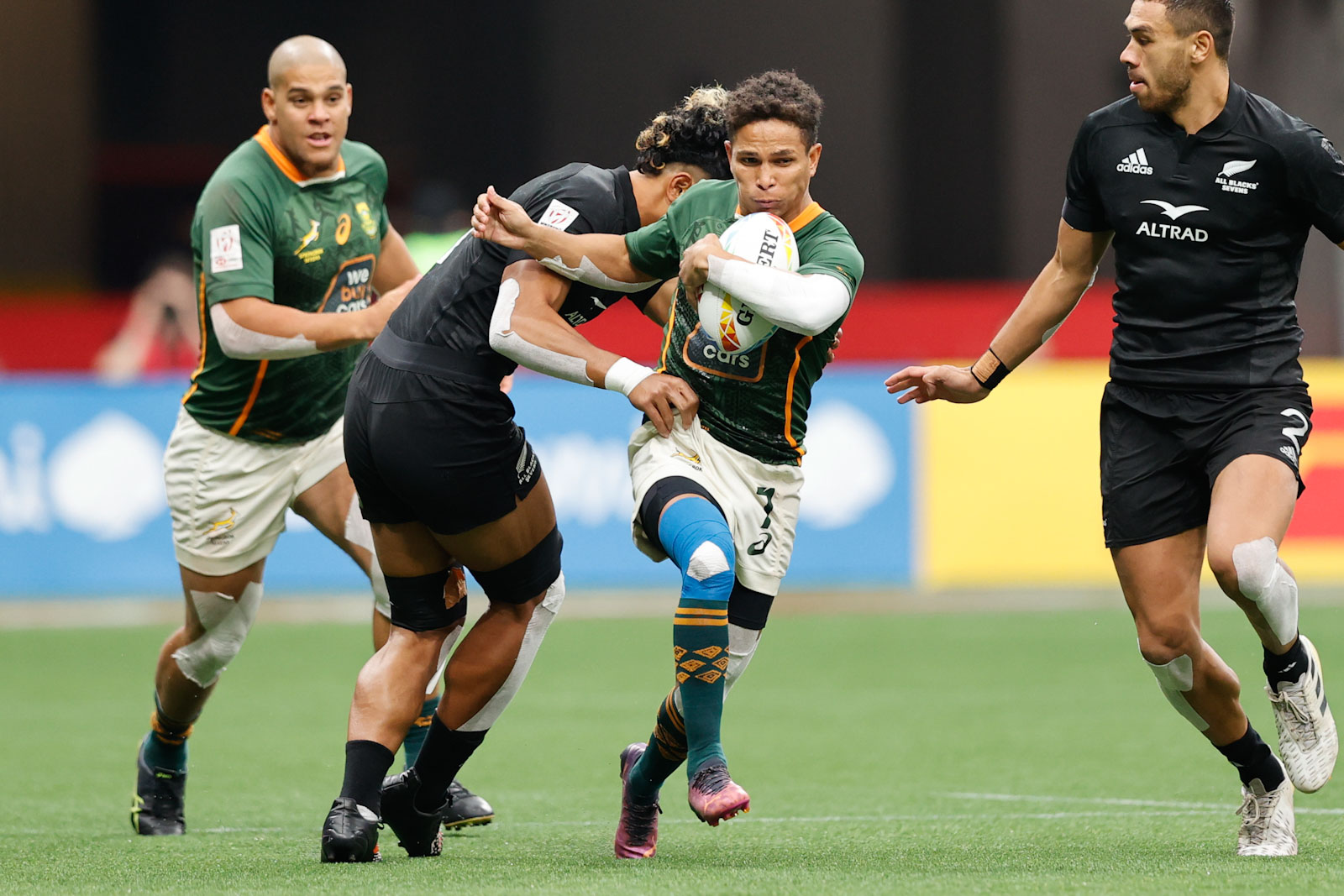 Ronald Brown is the leading points' scorer in the 2022 season.

Selected 2022 season stats for the Blitzboks:

A strong showing by the Junior Springboks in their their vital U20 Six Nations Summer Series clash against France in Ver...

Blitzboks to face Samoa in Cup quarters in Canada

The Springbok Sevens started the defence of their HSBC Canada Sevens title on a strong note by beating Spain, Canada and Australia to top Pool C at BC Place in Vancouver on Saturday. They will face Samoa in the Cup quarter-finals on Sunday evening (20h02 SA time).

The Toyota Cheetahs moved to within a point of Carling Currie Cup log leaders the Vodacom Bulls as they were made to work hard for victory over DHL Western Province on Friday, while Windhoek Draught Griquas maintained their push for a playoff spot thanks to a last gasp win over the Sigma Lions on Thursday.

The Vodacom Bulls sealed the SA Rugby Under-20 Cup title in style by scoring four second-half tries without reply in the final against DHL Western Province in Pretoria on a wet Saturday afternoon.

Discipline at the core of Blitzboks’ rebound plans

The Springbok Sevens will start the HSBC Canada Sevens as the most successful team at BC Place in Vancouver, having played the most Cup finals of any of the 16 teams at the sixth tournament of this year’s HSBC World Rugby Sevens Series.

It is not often that you hear of someone crediting the game of rugby as a reason for her successful studies, but for Alichia Arries, whose rise through the rugby ranks is comparable to that of Springbok and Blitzbok speedster Cheslin Kolbe, that was exactly the case.

The Vodacom United Rugby Championship has digitally revealed the trophy that will be presented to the league champions at the first Vodacom URC Grand Final on Saturday, 18 June.

The pressure will rise significantly for the four South African teams in the Vodacom United Rugby Championship this weekend as they face opponents from the Northern Hemisphere in their penultimate round of home matches, where victories will be invaluable with an eye on playoff places.