Maties and UP-Tuks will contest the FNB Varsity Cup final in Stellenbosch on Monday, after both sides won their respective semi-finals away from home - the men from Stellenbosch smashed Western Cape rivals the UCT Ikeys in Cape Town, while the defending champions from Pretoria downed log-leaders UFS Shimlas in Bloemfontein.

The upshot is that Maties – who finished the regular season at third in the standings – will host UP-Tuks in the decider at the Danie Craven Stadium on Monday, 25 April, with kick-off scheduled for 19h00.

In the first semi-final in Cape Town, hooker Sean Swart scored a hat-trick as Maties hammered the UCT Ikeys 58-19. Sean Swart equalled CUT hooker Janus Venter’s record for the most tries in a FNB Varsity Cup season (12) and was named the FNB Player That Rocks.

That award could have gone to the entire FNB Maties pack that dominated at scrum time or to flyhalf Nevaldo Fleurs, who was successful with eight of 10 goal kicks in windy conditions. The Ikey Tigers came into this semi-final as favourites, having beaten their arch-rivals 44-27 in the round seven clash at the Green Mile.

But their discipline let them down (they conceded 18 penalties and lost two players to yellow cards), they lost the forward battle and they had just 38% of the possession.

The Maroon Machine will contest their 10th FNB Varsity Cup final next Monday and be chasing a record-extending sixth title. 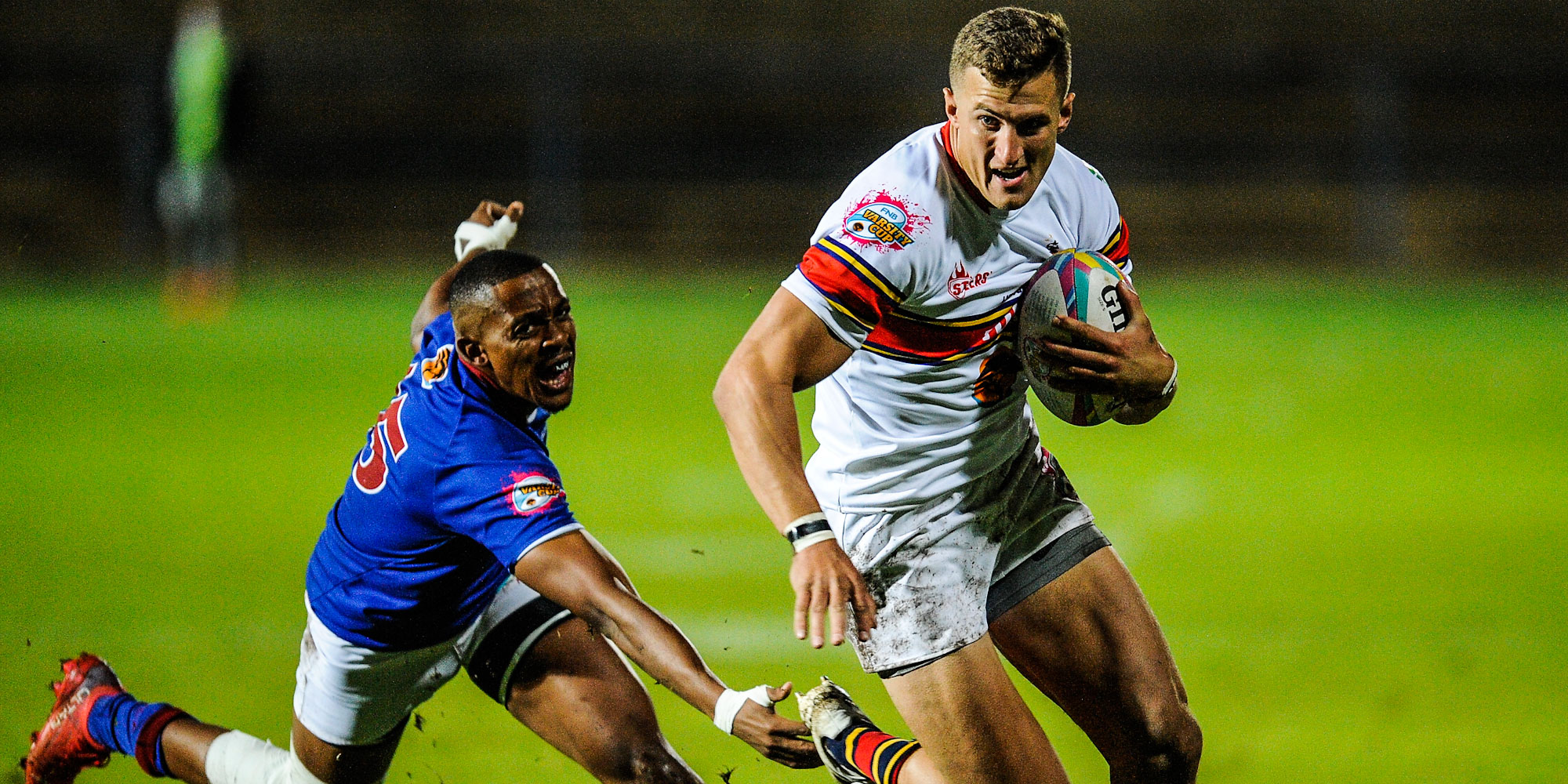 Action from the second semi-final in Bloemfontein.

Fullback Stefan Coetzee kicked a penalty and then scored a try to give the visitors an 8-0 lead after seven minutes, but the hosts hit back to score three tries before the break, and if it wasn't for a late flurry by the men from Pretoria, the Free Staters' half-time lead would have been bigger than two points (21-19).

Tuks captain Lincoln Daniels ran through the Shimlas defence after half-time to reclaim the lead for his side.

The visitors received another boost when Shimlas hooker Carl Wijburg was shown a yellow card for cynical play and while the ambitious hosts persisted with their ball-in-hand tactics, the UP-Tuks defence was more than equal to the task, as they managed to keep the much-vaunted UFS attack scoreless in the second stanza.

When the visitors won a penalty in their own half in the 58th minute, Coetzee stepped up to slot the long-range goal. For the second time in the game, UP-Tuks enjoyed an eight-point lead over their more fancied opponents.

Excellent game management in the closing stages ensured that UP-Tuks retained that lead, won the game, and marched on to yet another FNB Varsity Cup final.

Blitzboks to face Samoa in Cup quarters in Canada

The Springbok Sevens started the defence of their HSBC Canada Sevens title on a strong note by beating Spain, Canada and Australia to top Pool C at BC Place in Vancouver on Saturday. They will face Samoa in the Cup quarter-finals on Sunday evening (20h02 SA time).

The Toyota Cheetahs moved to within a point of Carling Currie Cup log leaders the Vodacom Bulls as they were made to work hard for victory over DHL Western Province on Friday, while Windhoek Draught Griquas maintained their push for a playoff spot thanks to a last gasp win over the Sigma Lions on Thursday.

The Vodacom Bulls sealed the SA Rugby Under-20 Cup title in style by scoring four second-half tries without reply in the final against DHL Western Province in Pretoria on a wet Saturday afternoon.

Discipline at the core of Blitzboks’ rebound plans

The Springbok Sevens will start the HSBC Canada Sevens as the most successful team at BC Place in Vancouver, having played the most Cup finals of any of the 16 teams at the sixth tournament of this year’s HSBC World Rugby Sevens Series.

It is not often that you hear of someone crediting the game of rugby as a reason for her successful studies, but for Alichia Arries, whose rise through the rugby ranks is comparable to that of Springbok and Blitzbok speedster Cheslin Kolbe, that was exactly the case.

The Vodacom United Rugby Championship has digitally revealed the trophy that will be presented to the league champions at the first Vodacom URC Grand Final on Saturday, 18 June.

The pressure will rise significantly for the four South African teams in the Vodacom United Rugby Championship this weekend as they face opponents from the Northern Hemisphere in their penultimate round of home matches, where victories will be invaluable with an eye on playoff places.