Former Springbok captain and No 8 Bob Skinstad believes this past weekend was just what the four South African teams in the Vodacom United Rugby Championship have been looking for.

Skinstad, nowadays a respected rugby pundit, sat in London and watched the South African derbies with absolute delight this past weekend, saying he loved every minute of what he described as “a try fest and just a highly enjoyable spectacle of rugby”.

The two Vodacom United Rugby Championship matches involving the Emirates Lions against the Cell C Sharks and then the Vodacom Bulls up against the DHL Stormers yielded 19 tries between them and enough to suggest they’re on the right track according to Skinstad.

“It was a celebration of rugby,” Skinstad said on Monday as he reflected on the weekend’s action.

“Both matches were exciting, high-paced games where we saw some incredible offloads, one-handed passes, passes through the legs, and attacks. It was great to see the Springbok players performing so well. Action from the Vodacom URC clash in Johannesburg.

"I think this weekend showed that the South African teams will be able to score tries against any side from the Northern Hemisphere, which is what they’re going to need to do to be successful in this competition. I think the teams will all be happy that they’re on the right track on attack.

"They can maybe shore up a bit on defence, but if they score enough tries they’re going to be right in it. I’d give both matches an 8 out of 10 for attack and a 7 out of 10 for defence. I really enjoyed every minute of watching it. It was just fantastic to sit back and watch a true spectacle of South African derbies.”

Starting with the Cell C Sharks’ 47-37 victory over the Emirates Lions in Johannesburg, Skinstad said he was once again in awe of Springbok Lukhanyo Am’s ability to control a match.

“Am was the best on field by a long way, but he was well supported by his front rankers and some lovely offloads," said Skinstad.

"Am’s ability to put a chip over the top at the right time, or a long pass to Aphelele Fassi and a long kick for Makazole Mapimpi really kept control of the game for the Sharks.

"The Lions came back into it at one stage, but Am just kept enough control of that contest and it was wonderful to watch him. The outside backs in general really impressed me. It was enough to show that our players have the skills, speed and pace but also the ability to make those quality decisions at the right time.” 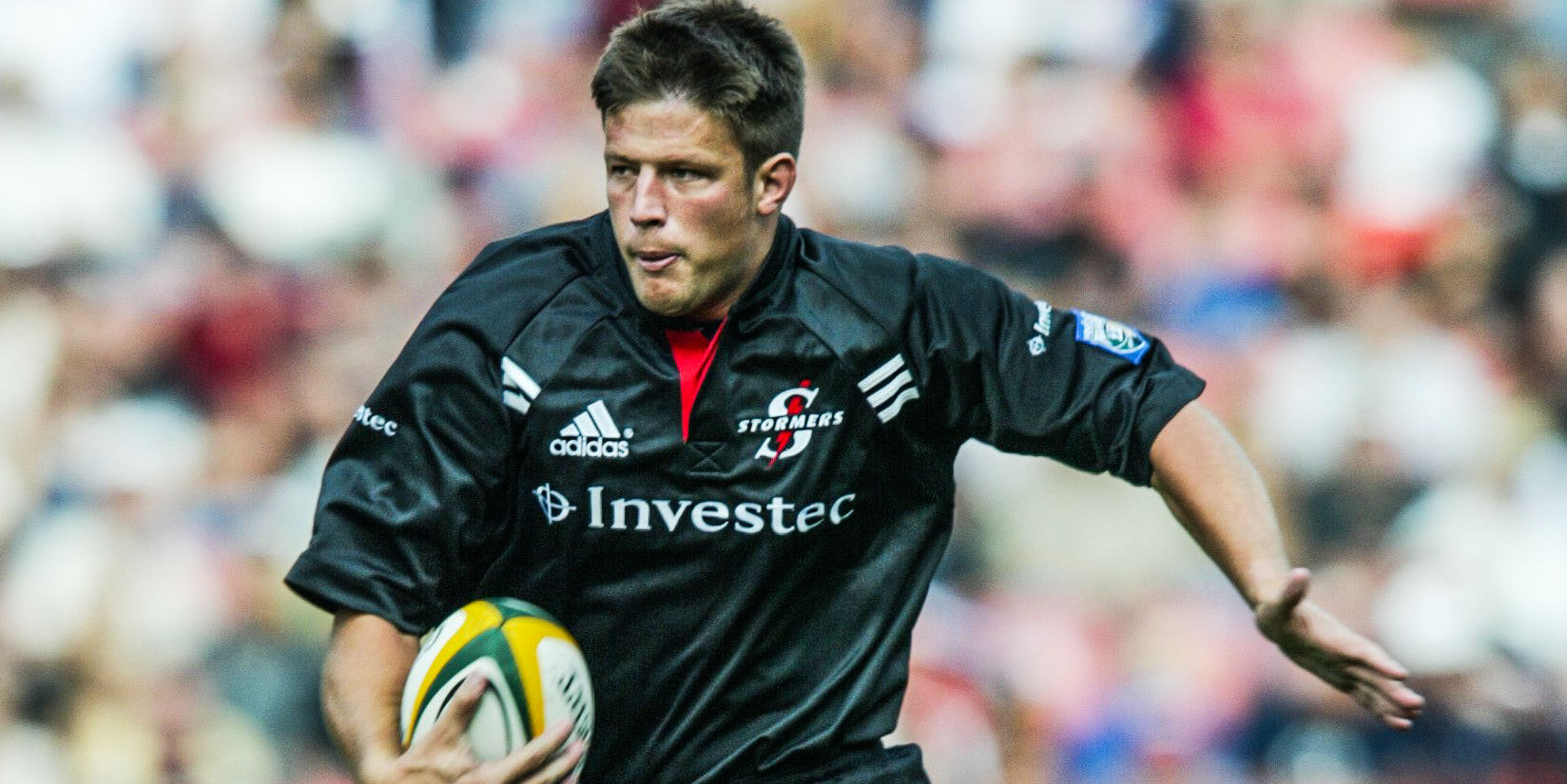 Bob Skinstad in his playing days.

As a devoted DHL Stormers man, Skinstad said even he was surprised by their 30-26 victory over the Vodacom Bulls at Loftus Versfeld.

“The Bulls have just been better for longer, but I think the Stormers will be absolutely delighted with that win," he said.

"They really showed the wherewithal to handle the Bulls comeback when they scored those 19 unanswered points. I thought Manie Libbok was good, and Steven Kitshoff and his chargers worked really hard upfront.”

Skinstad said this match also showcased the value of experience in a team: “I want the young players to come through and do well, but it’s also amazing to see the experienced players and how their rugby smarts makes a difference. The evergreen Morné Steyn comes on and immediately makes a difference for the Bulls with a kick across field.”

“All of those matches were on TV here in the United Kingdom. The Vodacom United Rugby Championship is a wonderful international showcase of our South African talent. It was just such a feel-good rugby weekend for me.”

Emirates Lions flyhalf Jordan Hendrikse is just 20 years old, but already he has experienced more as a player than many ...

Individual award winners to be revealed...

The Vodacom United Rugby Championship is set for a thrilling conclusion in the next few weeks as the competition reaches...

The three South African sides who have progressed to the Vodacom United Rugby Championship quarter-finals will keep a ke...

After eight months of competition and an enthralling final weekend of league play, the venues for the four Vodacom Unite...

The three South African franchises that booked their spots in the Vodacom United Rugby Championship play-offs will all t...

Springbok Sevens captain Siviwe Soyizwapi has been ruled out of this weekend’s HSBC Spain Sevens tournament at Estadio La Cartuja de Sevilla, and will be replaced by Shaun Williams, who is scheduled to depart to Spain on Monday evening.

Coastal sides off to a winning start in 2022

The Cell C Sharks and DHL Stormers kick-started 2022 in the Vodacom United Rugby Championship on a victorious note on Saturday as they secured valuable away victories against the Emirates Lions and Vodacom Bulls respectively.

The Springbok Sevens team outplayed Australia 19-0 in the Cup semi-final of the HSBC Spain Sevens in Malaga on Sunday, to reach their fifth consecutive HSBC World Rugby Sevens Series final.

Selvyn Davids scored a try after the buzzer to ensure the Springbok Sevens team won their fifth consecutive HSBC World Rugby Sevens Series tournament – and their third of the 2022 season – when they beat Argentina by 24-17 in Malaga on Sunday.

The Springbok Sevens team will face Canada in the quarter-finals of the HSBC Spain Sevens in Malaga at 20h07 (SA time) on Saturday after an impressive 43-0 victory over England in their second and final pool match.

All eyes on Edinburgh to maintain top spot

The Irish province’s dominance in the Vodacom United Rugby Championship was underlined as all four qualified for the last 16 of the European Champions’ Cup this past weekend, and while the South African teams have returned to action, it’s Edinburgh recent resurgence what will be keenly watched as the competition resumes up north this weekend.

There are few things more rewarding on the HSBC World Rugby Sevens Series than to finish a tournament on the top step of the podium, with a gold medal around your neck and fireworks going off in the background, and for Springbok Sevens flyhalf Dewald Human, it is when the saying “teamwork makes the dream work” really bears fruit.

Siya Kolisi is the SA Rugby Player of the Year for 2021, after the popular Springbok captain garnered the most votes for his performances during a tough season, while the exciting Aphelele Fassi underlined his great potential by winning the Young Player of the Year award.

There will be time for reflection of what it means to captain the Springbok Sevens team at the HSBC Spain Sevens in Seville this weekend, but for Impi Visser the real issue when they run out at the Estadio Olympico de la Cartjuna on Saturday will be to ensure they hit the ground running.

World Rugby announced on Thursday that iconic South African brandy Klipdrift will be an Official Sponsor of Rugby World Cup Sevens 2022, which will be hosted in Cape Town from 9-11 September, 2022.

Springbok Sevens captain Siviwe Soyizwapi has been ruled out of this weekend’s HSBC Spain Sevens tournament at Estadio La Cartuja de Sevilla, and will be replaced by Shaun Williams, who is scheduled to depart to Spain on Monday evening.

All eyes on Edinburgh to maintain top spot

The Irish province’s dominance in the Vodacom United Rugby Championship was underlined as all four qualified for the last 16 of the European Champions’ Cup this past weekend, and while the South African teams have returned to action, it’s Edinburgh recent resurgence what will be keenly watched as the competition resumes up north this weekend.