Double delight in the desert for the Blitzboks

The impressive JC Pretorius scored the winning try for the Springbok Sevens to defeat Australia 10-7 in a thrilling HSBC World Rugby Sevens Series final in Dubai on Saturday evening.

This hard-fought win means a second Emirates Dubai 7s tournament tournament victory in as many weeks for the Blitzboks at their favourite desert hunting ground, where they also achieved a rare feat of three tournament wins in a row.

Australia took the fight to the Blitzboks and they led 7-5 at halftime after Dietrich Roache had converted their sole try scored by Corey Toole.

Siviwe Soyizwapi, the inspirational Blitzboks skipper, maintained his prolific form by scoring his team’s try early in the match, which was unconverted and meant Australia had a slender two-point lead at halftime.

The second stanza was a very tense affair and the Blitzboks were forced into many errors, however, their defensive work kept them in the game and it was no surprise when Ronald Brown jackaled another turnover to turn defence into a lethal attack.

The strong running Pretorius broke the Aussie resistance with a powerful surge, which set him up for the winning try.

South Africa stretched their impressive winning run to 24 matches on their way to a ninth overall title success in Dubai. 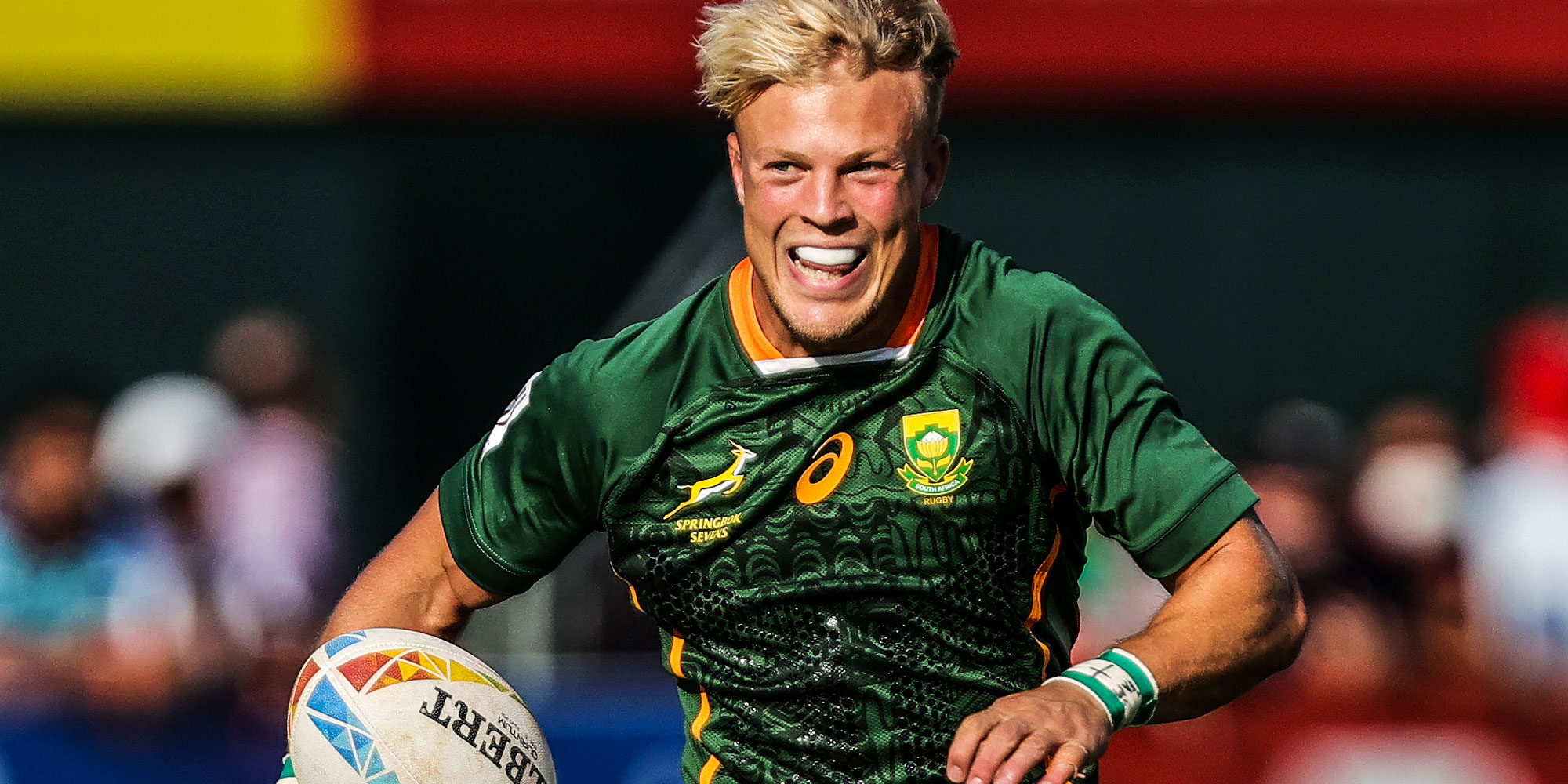 JC Pretorius scored the match winning tries in the semi-final against France and the final against Australia.

The semi-final against France was also in the balance until Pretorius scored a late try to add to a first-half brace by Siviwe Soyizwapi to secure the Springbok Sevens team a spot in the Emirates Dubai 7s final.

The final score against the French was 19-12, but the Blitzboks had to dig very deep to get the victory and progress to their fourth successive HSBC World Rugby Sevens Series final. It was also their 23rd consecutive win.

The Blitzboks were slow out of the blocks and made a number of uncharacteristic mistakes, which handed France the momentum and allowed them to go 7-0 up in the second minute when Stephan Parez scored.

Soyizwapi stepped up to the plate though and scored twice in quick succession as the Blitzboks got their hands on the ball. The first try involved some slick stepping by Selvyn Davids, and the second came from a ruck turnover, as the South Africans took a 12-7 lead at the break.

With more errors creeping into their game, the French capitalised to pull level at 12-12 with Jordan Sepho scoring their second try in the 10th minute.

Pretorius then did what was needed to ensure his team take the win and book their place in the final at the end of a very tough semi-final.

Ronald Brown on the attack against Kenya.

In their first game on Saturday, the Springbok Sevens team qualified for the Emirates Dubai 7s semi-finals – their fourth on the bounce – courtesy of a 31-19 win over a tough Kenyan side in their quarter-final.

After early tries by Zain Davids and Siviwe Soyizwapi which handed the South Africans a 10-0 lead, Kenya gradually worked their back into the game and with a minute over in the first half, Alvin Marube scored their first try, making it a three-point game.

But the Blitzboks reacted very quickly. Selvyn Davids put in a superb run before the ball finally made it into the hands of Ronald Brown, who scored a crucial try after the hooter had sounded, which gave South Africa a 17-7 lead at the break.

Brown and Branco du Preez were instrumental in setting up a try for Christie Grobbelaar early in the second half to stretch their lead to 24-7.

Shaun Williams then scored a gift of a try after he snatched a loose Kenyan pass which all but secured the win for the Blitzboks, although the Sujaa scored two late tries.

Powell: Blitzboks have room for improvement

The Springbok Sevens were too strong for Great Britain and won their Pool A decider 21-7 on Friday evening to finish unbeaten on the first day of the second HSBC World Rugby Sevens Series tournament in Dubai.

The Cell C Sharks’ pack laid the foundation and Boeta Chamberlain kept the scoreboard ticking over as they beat the Vodacom Bulls by 30-16 in a typically tough Vodacom United Rugby Championship derby in Durban on Friday night.

The Springbok Sevens defeated Great Britain 21-7 in their final Pool A match on Friday evening at The Sevens Stadium to finish unbeaten on day one of the second HSBC World Rugby Sevens Series tournament in Dubai. In doing so, the South Africans stretched their current unbeaten run to 21 matches.

The SA Rugby match official panels for 2022 were confirmed on Friday, with 22 referees named on the National Panel following a virtual selection and grading meeting by the SA Rugby Referees Department and the South African Rugby Referees Association Executive, for what will be a very busy local season next year.

Senatla and Orie bolster Stormers side

Springbok lock Marvin Orie and Blitzbok speedster Seabelo Senatla will make their first appearances of the season for the DHL Stormers in the Vodacom United Rugby Championship encounter with the Emirates Lions at DHL Stadium on Saturday.

The Emirates Lions surged to the top of the South African Shield in the Vodacom United Rugby Championship with a big victory in Cape Town, while the Cell C Sharks’ experienced Test players made a game-changing difference as they beat the Vodacom Bulls in Durban, on the weekend that fans finally returned to provincial rugby after a 20 month wait.

The importance of having your Test stars in action in your club jersey was underlined on both sides of the equator in the latest round of the Vodacom United Rugby Championship.

Five star Springboks – Lukhanyo Am, Damian de Allende, Eben Etzebeth, Siya Kolisi and Makazole Mapimpi – are up against each other for the coveted SA Rugby Player of the Year award for 2021 after earning the most votes in the annual nomination process.

Vote now for the Castle Lager Test Try of the Year

Supporters can have their voices heard by voting for the Castle Lager Test Try of the Year - videos of all the finalists are below as well as the voting mechanisms. Great prizes are up for grabs and T&Cs apply.

Powell: Blitzboks have room for improvement

The Springbok Sevens were too strong for Great Britain and won their Pool A decider 21-7 on Friday evening to finish unbeaten on the first day of the second HSBC World Rugby Sevens Series tournament in Dubai.

The Emirates Lions surged to the top of the South African Shield in the Vodacom United Rugby Championship with a big victory in Cape Town, while the Cell C Sharks’ experienced Test players made a game-changing difference as they beat the Vodacom Bulls in Durban, on the weekend that fans finally returned to provincial rugby after a 20 month wait.