The Springbok Women had little to show at the end of a highly entertaining match with the Barbarians Women at Twickenham in London on Saturday, with the 60-5 scoreline a very sober reflection of the difference in experience, class and execution in match played at a high intensity and pace.

The Baabaas’ 38-0 lead at the break was a sign of things to come, but credit to the South African side's second half effort, as they showed some aptitude and appetite to play at this level.

The Baabaas made merry of a number of poor options by the Springbok Women, especially with too many errors by the South Africans handing their experienced opponents more than enough opportunity to score easy tries. And tries they scored – in fact ten of them – with three by left wing Sarah Levy.

If the speedster had a field day, it was thanks to some dominance, especially in the opening half, by her pack, but also real sloppy passing by the South African backs who handed hard-fought momentum right back to their opponents.

The Baabaas started strong and never relented. They opted for an attacking lineout in the opening minute and although the drive was repelled, the pressure soon started to tell.

South Africa conceded a 5m-scrum after Unam Tose's pass to Zenay Jordaan forced the flyhalf to carry the ball over. From a resulting and powerful scrum, flyhalf Katy Daley-Mclean fired a pin-point cross kick which Levy gathered to score. The flyhalf slotted the conversion as well and the Baabaas were on the run.

Their second try came courtesy of the veteran England flyhalf as Daley-Mclean found the blind side to score in the corner after 14 minutes.

The next try was one of a few gifted on a plate. Midfielder Chumisa Qawe lost the ball while on attack, scrumhalf Natasha Hunt grabbed the ball and ran all of 30 meters to the Bok tryline. She was hauled in but French-based lock Lenaig Corson scored from the following scrum. Daley-Mclean converted for a 19-0 lead after 18 minutes.

The jittery backs did not help themselves on defence either as right wing Rhona Lloyd raced through after a sniping run found the defence napping. The conversion was good and the lead 26-0 after 24 minutes, but that soon became 31 as Levy added a second try on the half hour mark, again after poor passing handed possession back to the Baabaas. 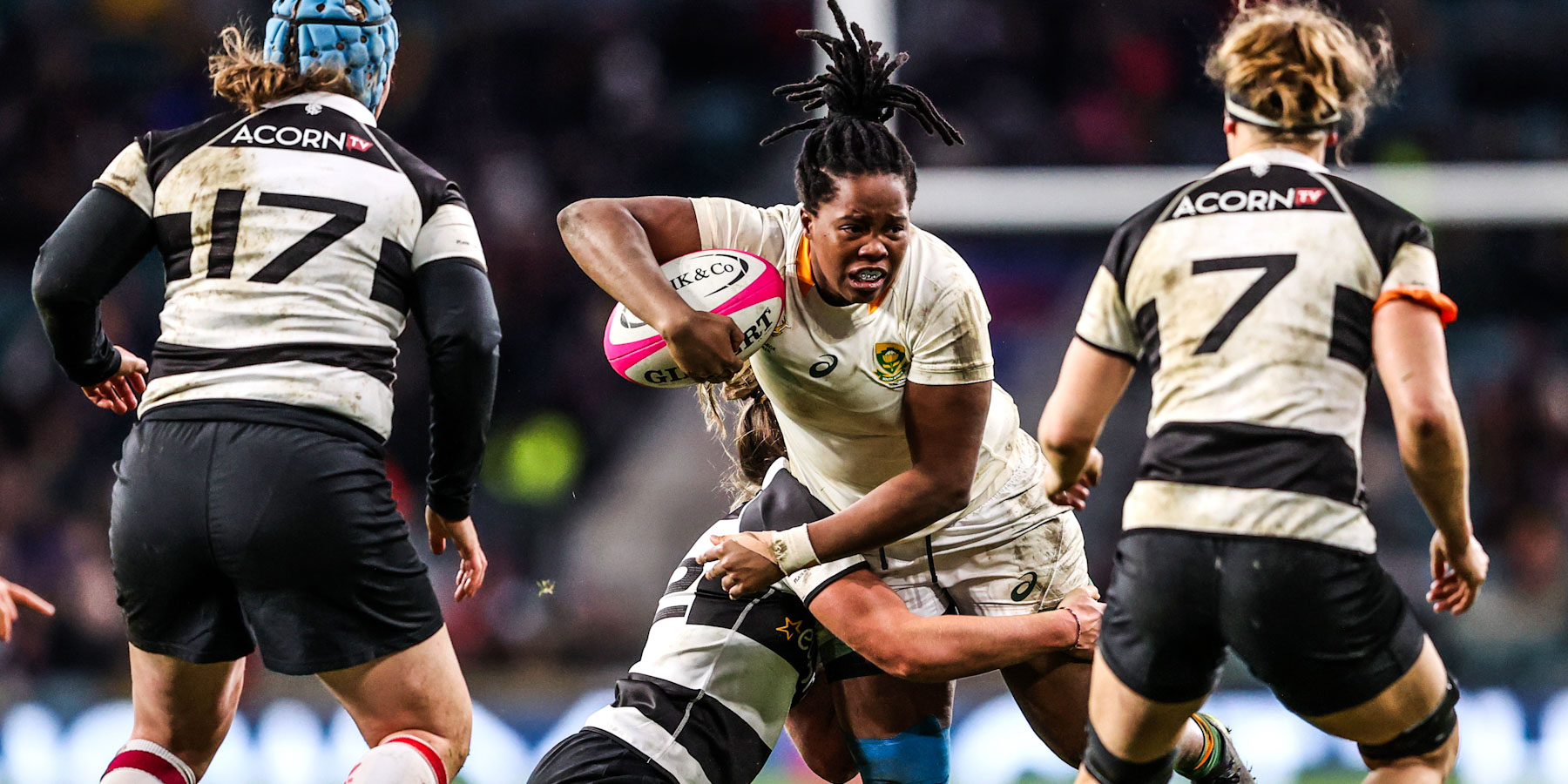 Chumisa Qawe on the attack.

It shored up the scrum, but the shoddy handling at the back continued, which allowed Hunt to intercept and sprint away for her first try of the match. No 8 Sizophila Solontsi was the culprit after collecting the ball at the back of the scrum, but then finding Hunt instead of Tose with her pass. Daley-Mclean converted for a 38-0 lead at the break.

The second half started brightly for the Springbok Women, and they were handed a penalty in front of the poles early on. Jordaan missed the attempted goal though as she hit the uprights.

The SA scrum looked better with Charlie – who proved industrious for the remainder of the match – on the field, but it wasn’t long before the Baabaas scored the first points of the second half through a maul, with prop Lindsay Peat dotting down.

South Africa's inability to get out of their half was not helping matters either and when Qawe was yellow carded after 55 minutes, the Baabaas made them pay immediately. The ball was moved to the left where Levy was waiting. She made no mistake and scored her third try of the afternoon.

The scoreboard ticked over to 50 just after the hour mark with replacement prop Simi Pam crashing over after sustained pressure by the pack.

Credit to the Bok Women, who kept on fighting and found some stability on attack. They held the ball well and had a good run as they kept the ball though phases. Malinga thought she scored with great run down the blind side but she had put a foot in touch.

That spurred them on however and the South Africans kept on attacking, but again a last pass went astray, and another scoring opportunity went down the drain.

Malinga was not going to be denied though as she finished strongly when Lerato Makua busted through following some good interplay. The winger had to beat two defenders in the end, with some good work done earlier in the move by Eloise Webb, who started the counterattack, Makua and Catha Jacobs handed South Africa a well-deserved try.

Irish flanker Ciara Griffin scored in the last competitive game of her career, but could not do the fairy tale ending of converting her own try. To be fair, their Twickenham experience turned out to be no fairy tale to the Springbok Women either.

The Springbok Women’s Sevens team, who finished seventh at the Commonwealth Games in Birmingham, will now turn their att...

Selection for the Junior Springbok Women will be one of the many rewards on offer to the country's leading Under-20 play...

Breakthrough win in Japan confidence booster for B...

Their historic first Test victory on foreign soil – and a first win over Japan – in Kumagaya on Saturday has boosted the...

SA Women's Sevens finish on a high in Birmingham...

The Springbok Women's Sevens team saved their best for last to claim seventh place at the Commonwealth Games 2022 in Bir...

Ronald Brown was "Johnny-on-the-spot" in the Blitzboks' first game on the opening day of the Emirates Dubai 7s on Friday, scoring 18 points as the Springbok Sevens team opened their campaign with a 28-7 win over Ireland, which they followed up later with a commanding 52-12 win over Japan, and a 31-12 victory over Great Britain to top Pool C.

The Vodacom United Rugby Championship announced on Friday that this weekend’s round six matches in South Africa had been postponed due to the emergence of a new variant of COVID-19 (B.1.1.529). Next week’s round seven matches have also been postponed.

Ntoyanto: Baabaas rugby for props too

The festival of rugby as celebrated by the Barbarians and their annual opponents does not mean that the forward packs are left behind for flashy backs to score the tries and grab the limelight.

Springbok coach Neil Powell was pleased with his side’s performances on the first day of the HSBC World Rugby Sevens Series tournament in Dubai, but reckons there’s plenty of room for improvement for the Blitzboks, who finished the unbeaten and on top of Pool C on Friday.

The Springboks Sevens kick off their 2022 HSBC World Rugby Sevens Series campaign with a testing encounter against fast-improving Ireland on the first day of the season-opening Emirates Dubai 7s tournament, which starts on Friday.

The score against the Barbarians on Saturday reflected some realities of where the Springbok Women squad are on their road to next year's Rugby World Cup and although it didn’t make for pretty reading, head coach Stanley Raubenheimer would not want it any other way.

Springbok Sevens stalwart Muller du Plessis has been ruled out with a leg injury while Ryan Oosthuizen will be given as much time as possible to recover from his ankle niggle as the Blitzboks got their preparations underway for this coming weekend’s second HSBC World Rugby Sevens Series tournament in Dubai.

While most of the attention in the Vodacom United Rugby Championship this weekend was on the ongoing drama to get the four sides out of South Africa, elsewhere Ulster rocked the competition with their win over top side Leinster in Dublin.

Two Vodacom United Rugby Championship derbies originally scheduled for February 2022 have been brought forward and will be played in Durban and Cape Town this weekend.

Welfare and accessibility are at the heart of Game On Global, a programme of optional community law variations launched by World Rugby and national member unions today.

Ronald Brown was "Johnny-on-the-spot" in the Blitzboks' first game on the opening day of the Emirates Dubai 7s on Friday, scoring 18 points as the Springbok Sevens team opened their campaign with a 28-7 win over Ireland, which they followed up later with a commanding 52-12 win over Japan, and a 31-12 victory over Great Britain to top Pool C.

The score against the Barbarians on Saturday reflected some realities of where the Springbok Women squad are on their road to next year's Rugby World Cup and although it didn’t make for pretty reading, head coach Stanley Raubenheimer would not want it any other way.