Elton Jantjies nailed a simple penalty goal from right in front after the siren sounded to conclude a marvelously nail-biting Test in which the lead crazily changed hands four times in the final five minutes.

Depressingly for the Boks, the history of one-week ago appeared to be repeating itself as the All Blacks twice clawed their way into the lead, through the boot of Jordie Barrett, after being under the cosh for much of the second half. The brave Boks looked in danger of receiving no reward for fighting back from what had been a nine-point deficit midway through the first half.

The first of Barrett’s efforts came in the 75th minute (Frans Steyn adjudged not to have rolled away from a tackle in which he appeared to strip the ball from Damian McKenzie). It overturned a lead the Boks had held for 23 minutes; an awful feeling of déjà vu descended over South Africa (26-25 New Zealand).

But the Boks were not to be denied. They won the ball back from the restart and with penalty advantage, Jantjies coolly knocked over a drop goal (28-26 to the Boks) - his first in green and gold.

A minute later the All Blacks did it again – Barrett nervelessly steering home from 40 metres to the left after Franco Mostert was nailed for not rolling away at a tackle (29-28 New Zealand). Agony.

Worse, the Boks restart with a minute remaining did not go the full 10 metres, and the All Blacks had a centre field scrum and 60 seconds to survive. But they could not do it. They managed to secure possession from the scrum but on the third phase (as they looked to run down the clock with forward drives) they were penalised as the 80 minutes ran out. 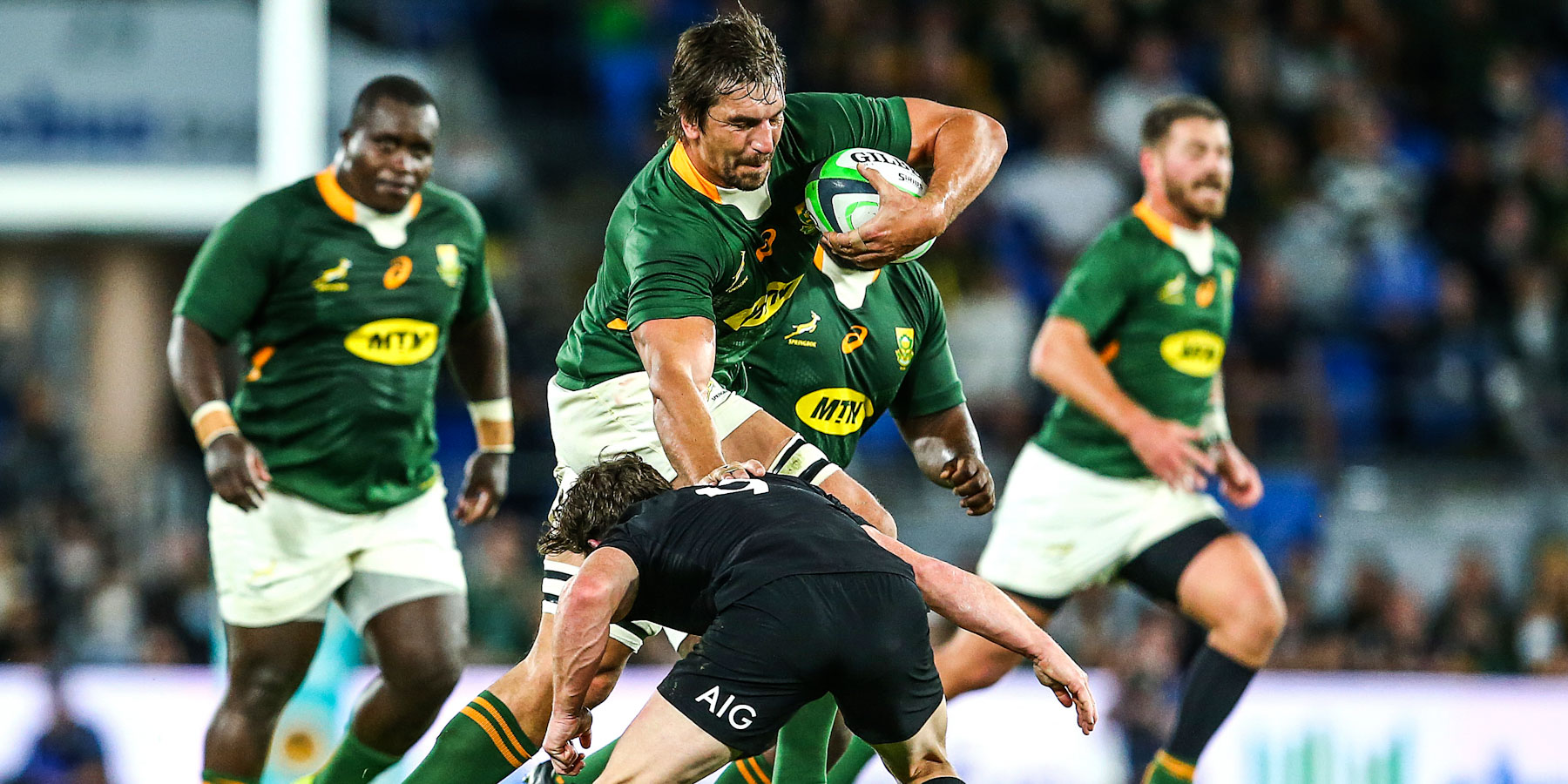 Eben Etzebeth on the attack.

The Boks had the option of a 55-metre penalty attempt – 10 metres in from the left-hand touchline- but instead Steyn kicked the penalty into the 22. Everything now depended on lineout possession.

It was secured but the maul was halted, and the ball shifted infield with several carries towards the poles. Then, the whistle of referee Matthew Carley sounded – offside in the All Black defensive line right in front. Unbridled joy among the ranks of Bok players and replacements. Jantjies did the rest (31-29 South Africa).

The Boks had claimed the first points, created by a sublime piece of skill from centre Lukhanyo Am in the sixth minute. The Boks had tested the All Black defence with ball in hand and had their defence scrambling when it was moved right from phase possession down the backline from broken play deep in the New Zealand half.

However, it took a no-look, behind-the-back pass from Am to Sbu Nkosi to create a potential overlap which the winger ensured by drawing fullback Jordie Barrett before passing to overlapping Damian de Allende to cover the last few metres untouched.

Pollard’s conversion from wide on the right hit an upright – to add to a missed penalty from the other side of the field in the fourth minute – but the All Blacks were level within another six minutes.

Jordie Barrett kicked a penalty from a breakdown offside before disaster struck from the restart. The kick-off was knocked forward by fullback Willie le Roux and from the turnover, Beauden Barrett’s kick pass to right winger Sevu Reece was perfect for him to dive over in the corner under Duane Vermeulen’s tackle. 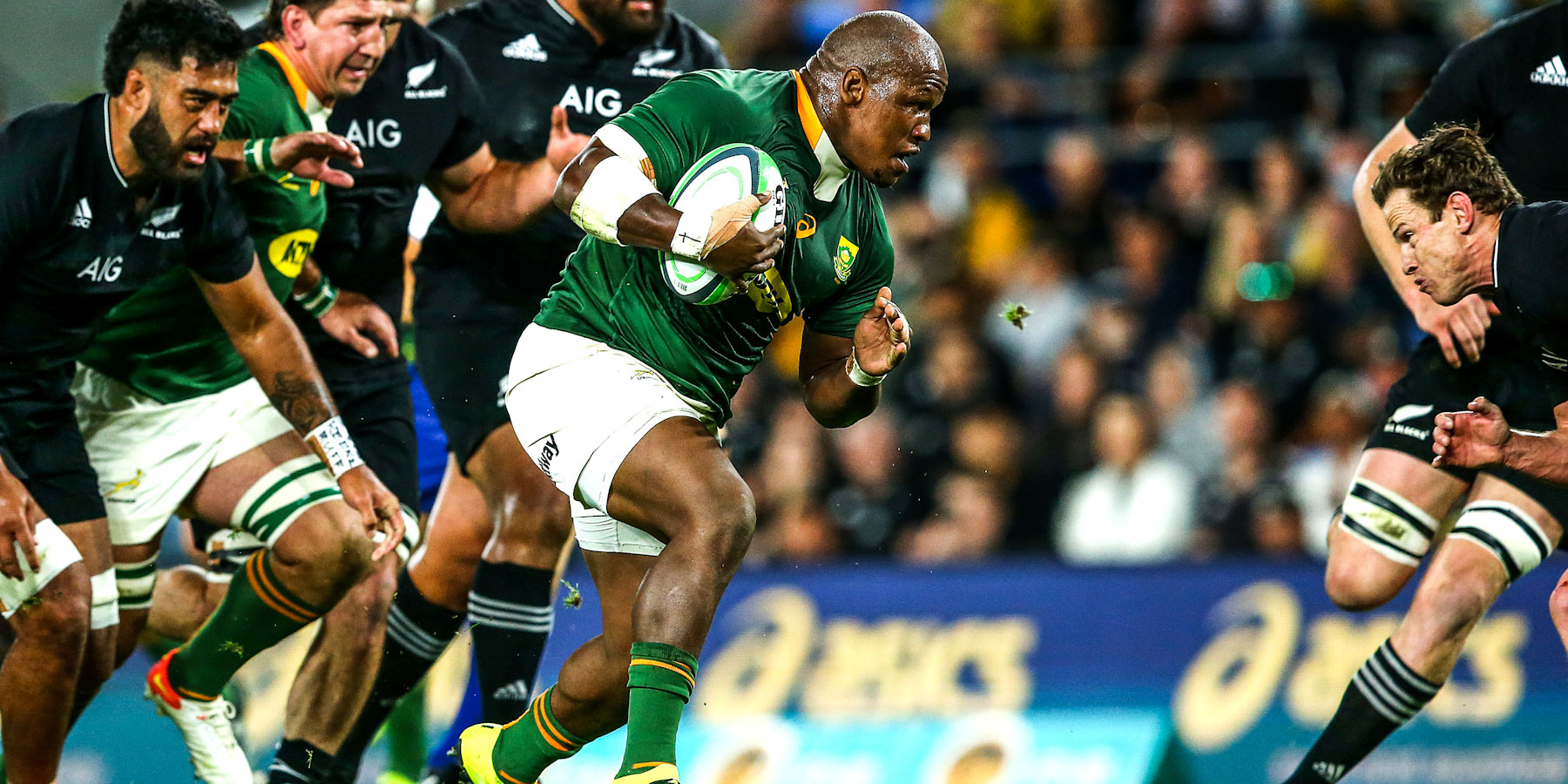 Bongi Mbonambi came inches from scoring in the first half.

Jordie Barrett could not add the conversion and Pollard edged the Boks back ahead with his first successful kick at goal in the 23rd minute (offside in the All Black defensive line) although moments before they were inches short of a second try when Bongi Mbonambi’s surge and bust through two tackles had him reaching out by the poles and grounding only centimetres short.

But two tries in five minutes – by flank Ardie Savea and scrumhalf Brad Weber – gave the All Blacks what looked like a potentially winning halftime lead.

Savea’s came from a marvelous midfield break by Beauden Barrett from a lineout on halfway – Rieko Ioane linking up to provide the scoring pass to the flank – and then Weber snaffled a loose ball ricocheting around at the front of a Springbok lineout on the five-metre line to score in the corner.

It gave the All Blacks the kind of nine-point lead that they almost never surrender but the fightback began on the stroke of halftime with a Pollard penalty; doubled five minutes into the second half as the Boks came out fighting at the start of a half they were to dominate.

They regained the lead in the 52nd minute with their second try – scored right in the left-hand corner after replacement fullback Frans Steyn gave the Boks field position with a 50/22 kick to create an attacking lineout on the other side of the field. A succession of phases sucked in defenders before the ball was shifted quickly left for wing Makazole Mapimpi to dive over.

Pollard’s conversion was wide but Elton Jantjies – coming on at No 10 as a replacement for Sbu Nkosi who went off for an HIA (Am shifting to wing) – stretched the lead out to five points (25-20) with a quarter remaining.

The half had been entirely dominated by the Boks and it was not until the 67th minute that Jordie Barrett’s secured his team’s first point s of the half with their second penalty. The Boks held onto a now slender two-point lead until those crazy final five minutes.

The Springboks departed for South Africa via Brisbane on Sunday in high spirits following a rewarding 31-29 victory agai...

Springboks down NZ in another last-gasp thriller ...

The Springboks were finally rewarded for all their effort and sacrifice in a 17-week odyssey since the start of the inte...

Nienaber applauds bench impact in win over All Bla...

The Springboks won a pulsating ding-dong battle against New Zealand by 31-29 in Gold Coast on Saturday to end their Cast...

Kolisi: “The Springboks will not give up”...

Springbok captain Siya Kolisi vowed that his charges would not give up in their mission to finish the Castle Lager Rugby...