Clean slate for Blitzboks in Edmonton

The Springbok Sevens team topped Pool A after the opening day of the HSBC Canada Sevens at Edmonton’s Commonwealth Stadium on Saturday, with commanding wins over Mexico, Hong Kong and Canada.

South Africa outplayed Mexico 56-0, Hong Kong 43-5 and Canada 49-0 on the first day of the second tournament in the HSBC World Rugby Sevens Series to continue with the impressive form they showed last weekend in Vancouver, where they claimed the title at BC Place.

They will meet Hong Kong in the quarter-finals of the tournament on Sunday, which Springbok Sevens coach Neil Powell sees as a day where everything starts afresh.

“It is not ideal to play an opponent that you have beaten well twice in a short space of time, as complacency could creep in, but we will make sure the guys have their minds on the job when we meet Hong Kong again in Sunday’s quarterfinals,” Powell said afterwards.

The coach was pleased with the effort on the opening day, which saw the team cross the opposing try line 22 times and only conceding one try – against Hong Kong. The Blitzbok goal kickers were equally accurate in their execution, converting 19 times, with Dewald Human slotting seven and Ronald Brown nine respectively.

“The artificial surface allows for a nice bounce and the kickers can strike the ball pretty true,” Powell explained.

“This also assisted greatly with our kick-offs, where we could really contest today and won back a number of contests. The guys spend a lot of time on the training ground to get it right and today they got some good rewards in that department.” 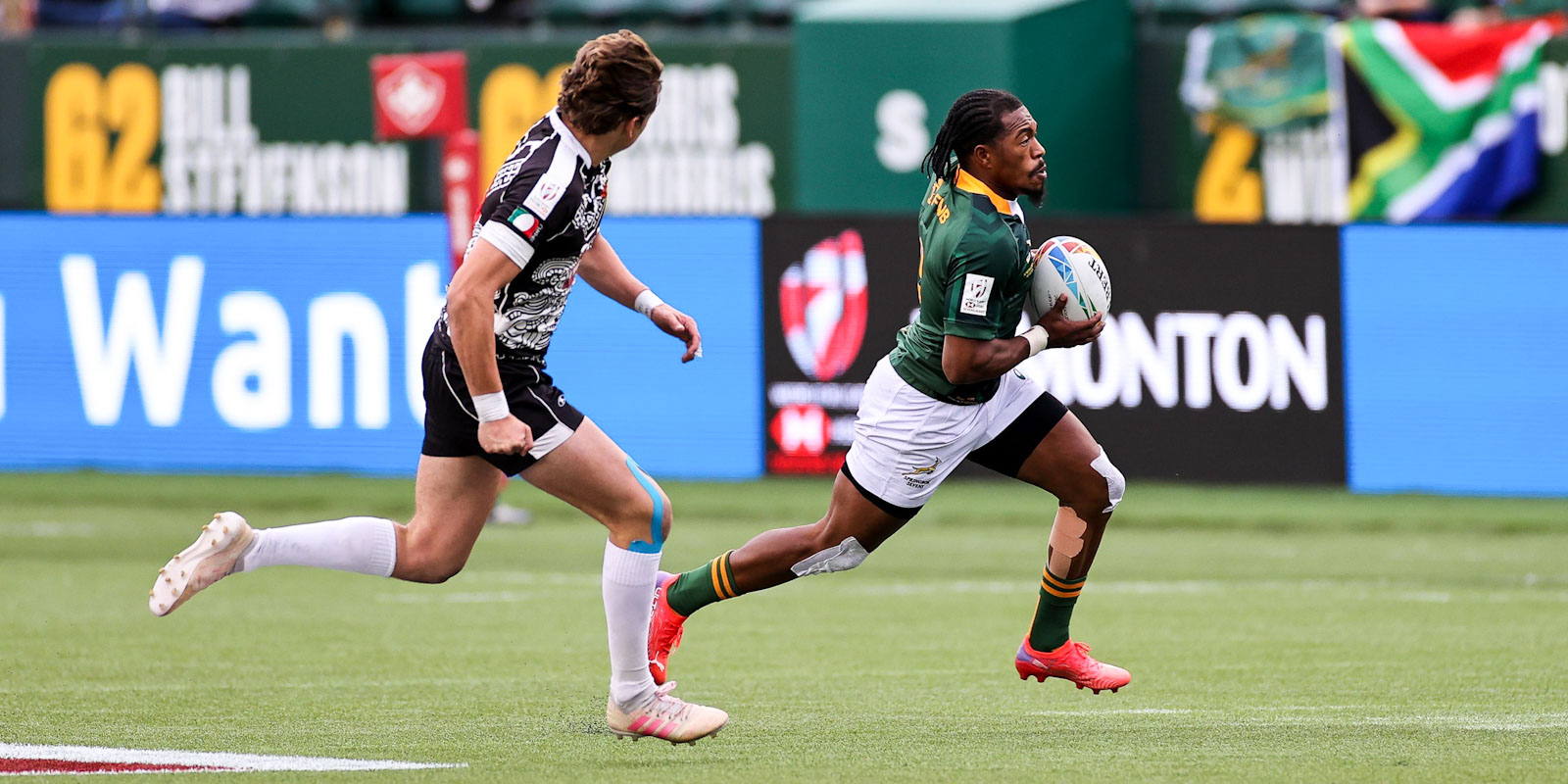 Darren Adonis on his way to the tryline against Mexico.

The Blitzboks were on song from the first match against Mexico. No less than six players scored in an impressive win, including James Murphy, who dotted down for the first time since making his debut for South Africa in April 2018.

Darren Adonis got a brace and Muller du Plessis scored the first of six on the day.

Against Hong Kong – in their second match – Du Plessis bagged two, alongside Siviwe Soyizwapi, who finished the day on 97 career tries for South Africa. The team conceded their only try of the day against the Far Eastern side after a yellow card to Zain Davids left then a man short.

Their final match in Pool A was a clinical showing against Canada. Du Plessis again excelled, bagging a hat-trick of tries while Selvyn Davids – who joined the team late in the week as a replacement for Angelo Davids – also eased into the tournament with a brace and a number of telling creative plays.

“The senior guys did well today and are showing the way and assisting our younger players very nicely. We had a good day, but all will start afresh on Sunday when we take on Hong Kong again,” Powell said.

The quarter-final schedule for Sunday (SA times) is: