Apart from being named the best Blitzboks player for the 2020 season, Gans also took over the captaincy of the national team for the HSBC World Rugby Sevens Series tournaments in Hamilton, Sydney, Los Angeles and Vancouver after regular leader, Siviwe Soyizwapi, was ruled out due to injury.

The Blitzboks lost the final against Fiji in Sydney, beat the same side in a thrilling Los Angeles finale and placed fourth in Vancouver to give Gans a more than decent winning percentage as captain.

When the COVID-pandemic forced the cancellation of the remainder of the World Series, Gans – who debuted for the Vodacom Blue Bulls in 2017 already – moved back to Pretoria for a solid stint of fifteens rugby.

He excelled in Vodacom Super Rugby Unlocked, helping the Vodacom Bulls to the title, and lit up the Carling Currie Cup as the Pretoria outfit bagged the oldest trophy in the country.

⚡ Our @Blitzboks Player of the Year is the ever-smiling Stedman Gans! #SARugbyAwards pic.twitter.com/cHTQCiMKfD

In short, Gans was a real winner in 2020, but that was a likely outcome for a player who has represented South Africa at Schools and Under-20 levels too, not to mention the two World Series gold medals in his ever-expanding medal collection too.

Gans had some time to reflect on all these achievements and told springboks.rugby that he is deeply humbled by his Player of the Year award.

"I am feeling pretty honoured and blessed, to be honest,” he said.

“If you look at the other guys in the sevens set-up, there are so many good players in there, so this is really the cherry on top for me."

Gans reflected on the Blitzboks’ season, and being named captain for the tournaments in New Zealand, Australia, USA and Canada.

“The captaincy was a huge surprise to me in the beginning and of course a huge honour,” he said. 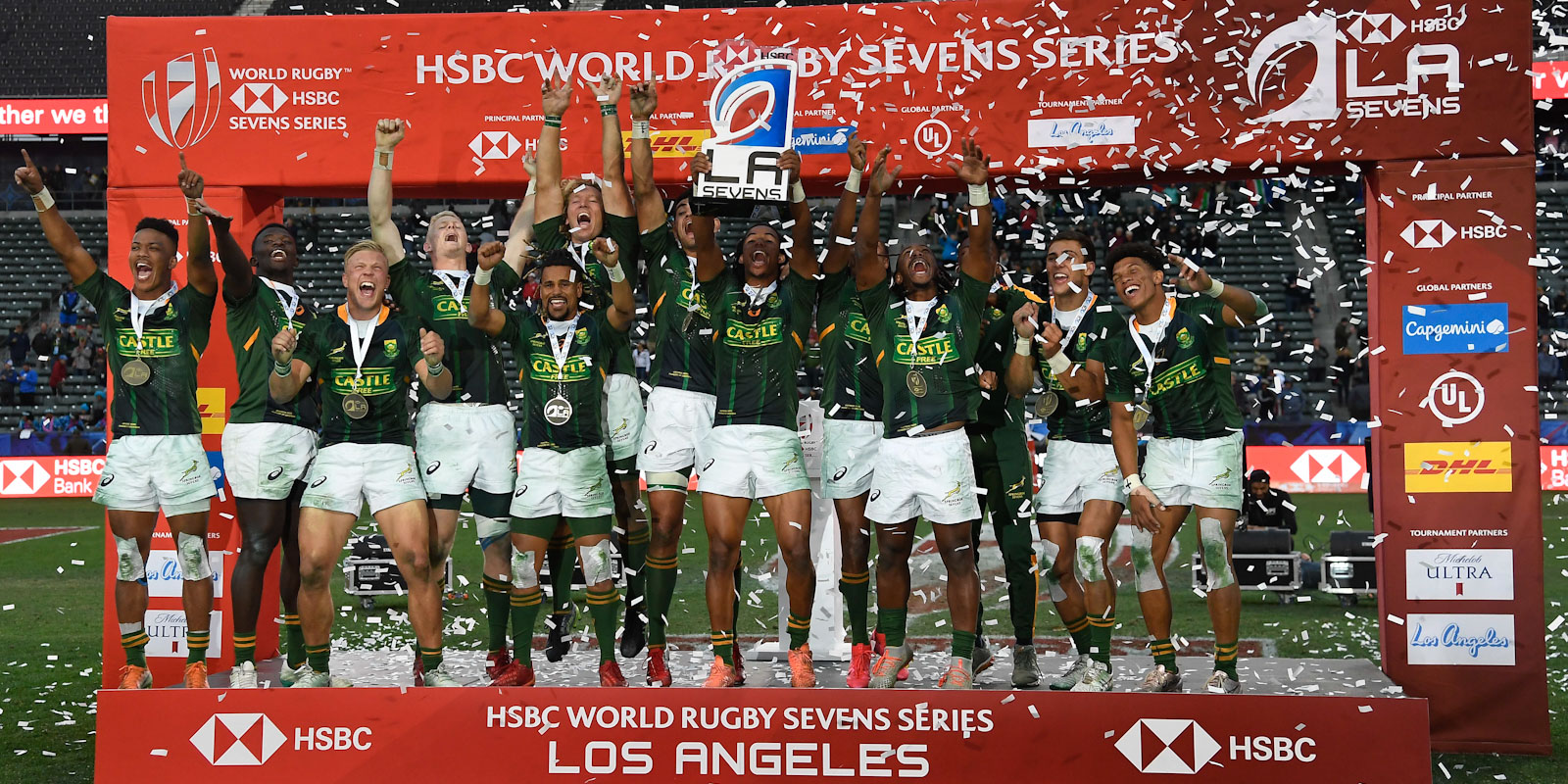 “I tried my very best, knowing that the previous guys have set the bar very high. I knew that if I maintain that, the job would be done. I hope I did ok and that the guys appreciated my effort.

"As a player, the captaincy rates very high, from a career perspective, no doubt."

The photo of him lifting the trophy in Los Angeles has been framed, physically and mentally.

"That win in Los Angeles was by far the highlight of 2020 for me, especially as I moved to the Vodacom Bulls and 15s after that.

“It was a nice way to leave the sevens season with. The way we won, with that dramatic comeback, it was unbelievable stuff,” said Gans.

Glory followed Gans around like a lap dog in the 2020 season and in Pretoria, two more trophy lifts would seal a remarkable season.

Gans scored some impressive tries in 2020.

"At the Bulls, things went well for me in Vodacom Super Rugby Unlocked and then the Carling Currie Cup, so I am pretty excited about the progress I have made so far,” said the midfielder.

“One learns a lot from coaches and at the Bulls, Coach Jake (White) and the management have been great. The leadership at the Bulls are really doing well, with Duane (Vermeulen), Morné (Steyn), Trevor (Nyakane) and Lizo (Gqoboka) inspirational.

“It is a pleasure to be guided by them. It is exciting times at the Bulls, and I am very keen to see the squad developing into something special."

Gans is due to join up with the Blitzboks again as they start to prepare for the Olympic Games in July and he will be welcomed back with huge smiles, as it was when it was announced that he was named as their Player of the Year.

The most experienced of them all, Branco du Preez, said the way Gans handled the added responsibilities of taking over as captain, was most impressive.

"He came into an experienced leadership group and slotted in immediately and when he had to take over from Shakes, he did so with ease, so I am very pleased for him,” said Du Preez.

Soyizwapi himself – the 2019 Springbok Sevens Player of the Year – said Gans deserved the award: “I am very happy for him, it is well-earned. He had a couple of awesome tournaments in the 2020 season."

Selvyn Davids, who was named in World Rugby's Dream Team after the shortened series, said Gans proved himself to be worthy of the award.

"It is not something that comes across your career easily or often, you need to earn it and Stedman did. He really showed his worth and I am sure he will keep going,” said Davids.

"Stedman is an incredibly hard worker and deserves the rewards that come his way. I am really pleased for him, he is such a nice guy as well, so very happy for him," said Oosthuizen.

World Rugby has publicly launched the Head Contact Process (HCP) to assist the sanctioning process for contact with the head and neck, underscoring the sport’s commitment to head injury prevention. This process has been developed through extensive collaboration and consultation with current and former players, coaches, referees and medical experts.

Tafel Lager Griquas made seven changes to their starting team to face Eastern Province in their 2021 Kick-off Pools match at the Nelson Mandela Bay stadium on Wednesday, where they will be hoping to secure their first win.