Duane Vermeulen led the charge as the Vodacom Bulls almost made a clean sweep at the annual SA Rugby Awards for the 2020 season, with the Springbok No 8 being named Player of the Year for a second time.

Vermeulen walked off with two awards, including the overall gong for SA Rugby Player of the Year, while the Vodacom Bulls, champions of Vodacom Super Rugby Unlocked and the Carling Currie Cup, won in almost every other category. It was therefore no surprise that the Vodacom Bulls were named Team of the Year and their Director of Rugby, Jake White, was Coach of the Year.

Cornal Hendricks capped a brilliant season by walking away with the accolade for Carling Currie Cup Player of the Year, and Jaco Peyper was named the OUTsurance Referee of the Year.

“It was a very tough season but Duane was superb – not only on the field, where his performances were on par with the very high standard we’ve become accustomed to from him, but he also led the Vodacom Bulls with aplomb as our teams had to navigate numerous new curve balls and challenges,” said Mr Mark Alexander, President of SA Rugby. “The pandemic has been disruptive to people from all walks of life and apart from the hard work done in training, first at home and later back at their team bases, it was heartening to see our players rolling up their sleeves and also helping fellow South Africans who are not as fortunate. We saw yet again that we are stronger, together.” 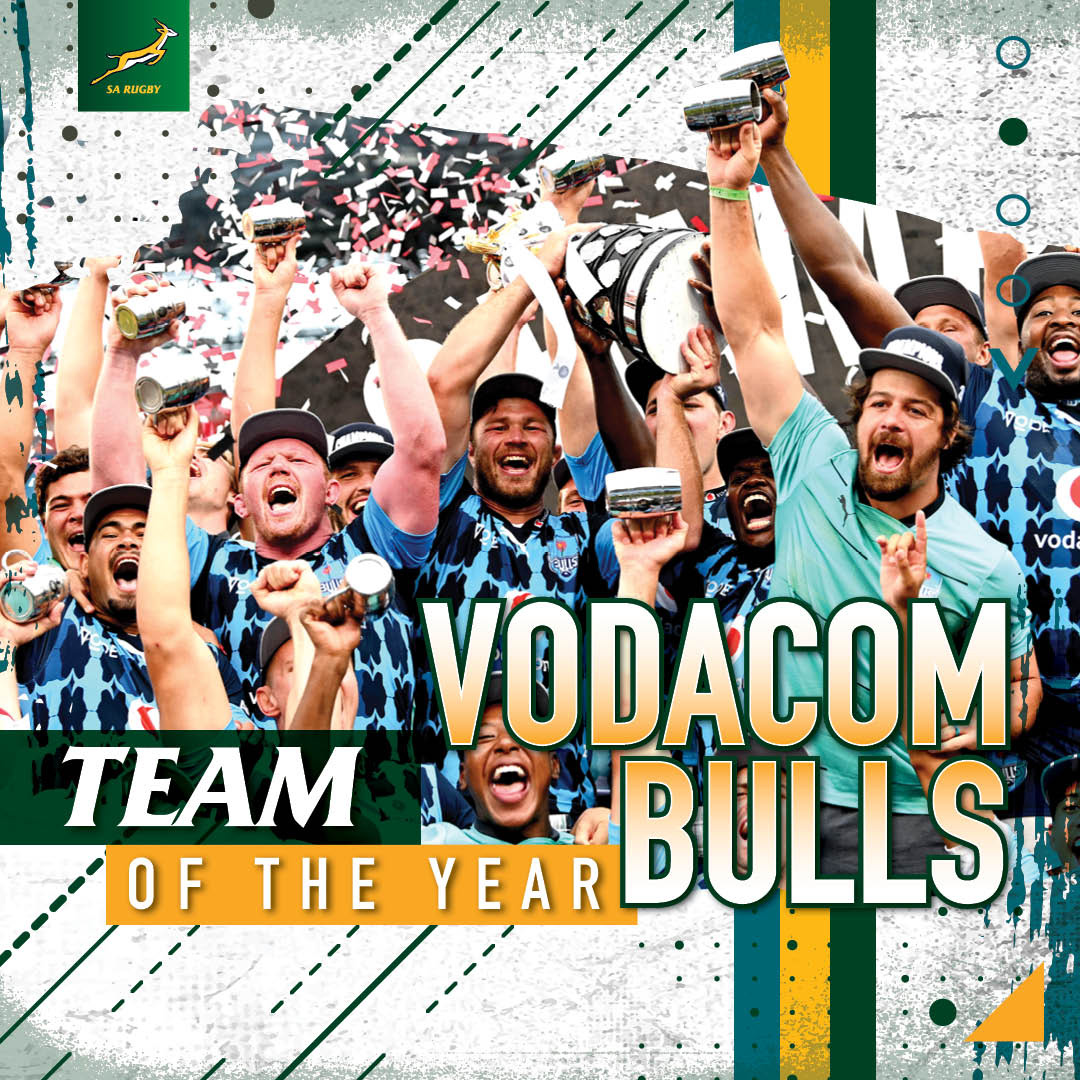 “We continue being very proud sponsors of such an amazing tournament that showcases and rewards the Champions in the Carling Currie Cup,” added Rust.

OUTsurance CEO, Danie Matthee, congratulated the experienced Peyper on his award: “Congratulations to Jaco Peyper for a great performance throughout a challenging year. There’s no denying the impeccable quality of the SA Rugby Referees and we’re proud to invest in growing this talent even further.”

The winners and finalists for 2020 are:

Stedman Gans, who made a successful transition from the Blitzboks to star for the Vodacom Bulls after the HSBC World Rugby Sevens Series was cancelled, was named Springbok Sevens Player of the Year, for his role as the Blitzboks’ won two tournaments out of six to finish second overall on the standings.

Wandisile Simelane, a former Junior Springbok star who got his first taste of senior rugby in green and gold in the successful Castle Lager Springbok Showdown before going on to star for the Emirates and Xerox Lions in the local competitions, was named Young Player of the Year.

The 34-year-old Vermeulen, who led the Vodacom Bulls to two titles last season, including the Carling Currie Cup for the first time since 2009, also won the Vodacom Super Rugby / Unlocked Player of the Year Award for 2020. “I would like to congratulate Jake and the Vodacom Bulls on their season, as well as Wandisile, Cornal, Stedman and Jaco, but I also have to acknowledge all our teams and players who worked tirelessly under difficult circumstances to ensure that we saw some rugby on local soil in 2020.

“A lot of hard work went into making the season a reality and I would like to thank everyone who played a part in making it happen, especially our broadcast partner and sponsors, who stuck with us through tumultuous times. “This was no ordinary rugby season, and Duane showed himself to be no ordinary player. In the most challenging of times, he still found a way to unlock his talent and passion for rugby, and in so doing helped to keep us all connected in our shared passion for the game.”

Arné Rust, Brand Director of Carling Black Label, hailed Hendricks’ exploits on and off the field during a difficult year: “Cornal Hendriks is a Champion among Champions, his performances on the field in the Carling Currie Cup and even off the field with initiatives like the Cornal Hendriks Foundation are an inspiration to us all. SA Rugby recognised World Rugby’s decision to recommend the postponement of the 2021 Rugby World Cup to next year, saying although it is disappointing for the Springbok Women’s team, it was understandable and sensible.

World Rugby has made the difficult decision to recommend the postponement of Rugby World Cup 2021, scheduled to be hosted in New Zealand between 18 September to 16 October, until next year. The recommendation will be considered by the Rugby World Cup Board and World Rugby Executive Committee on 8 and 9 March respectively.

We've compiled some action (and other) shots, courtesy of Gallo Images, of the various winners in the 2020 SA Rugby Awards.

The Guinness PRO14 finalists could be determined once and for all this weekend as two massive Irish derbies take centre stage in Round 14 of the competition.

Petersen and Njezula come in for DHL Stormers

Outside backs Sergeal Petersen and Sihle Njezula come into the DHL Stormers starting line-up for their 2021 Kick-Off Pools match against Tafel Lager Griquas in Kimberley on Tuesday.

We've compiled some action (and other) shots, courtesy of Gallo Images, of the various winners in the 2020 SA Rugby Awards.