The hosts started the match with a bang, running in five tries in the first half – with Blitzbok speedster Arendse scoring twice – while their solid defence limited the KwaZulu-Natalians to only one try in the opening stanza for 35-7 halftime lead.

The second half played out vastly differently with the visitors outscoring the home side three tries to two, but the Vodacom Bulls’ dominant first-half display was enough to secure the victory.

Experienced Springbok flyhalf Morne Steyn also proved that he has what it takes to compete with the top players in the country at the age of 36, as he kicked all five of his conversions for a 100% strike rate.

The Vodacom Bulls, under the guidance of 2007 Rugby World Cup-winning Springbok coach Jake White, took only seven minutes to get on the scoreboard, shortly after Cell C Sharks centre Jeremy Ward received a yellow card for a dangerous tackle, and they made the most of the extra man by touching down three times before the sides were level again.

Schalk Erasmus (hooker) touched down first from a powerful rolling maul, and then Blitzboks Stedman Gans (centre) and Arendse added their names to the try-scorers list, pushing the team into a 21-0 lead by the 14th minute. 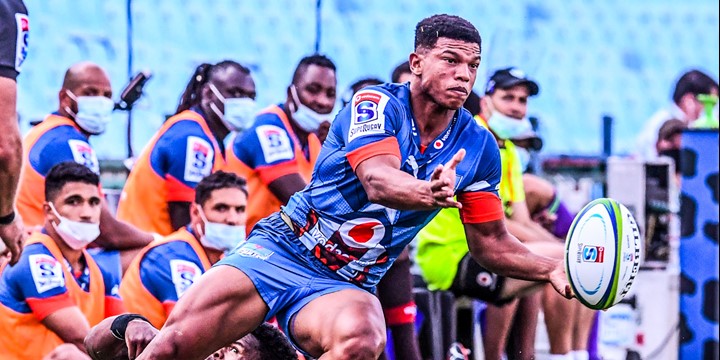 Arendse added his second five-pointer in the 24th minute after taking advantage of space out wide, and Travis Ismaiel (winger) crossed the chalk for their fifth try seven minutes later after gathering a pass at pace in space, which handed the Vodacom Bulls a 35-0 lead.

The Vodacom Bulls lost Marco van Staden to a yellow card in the dying minutes of the half, and the Cell C Sharks took advantage of this with Grant Williams (replacement scrumhalf) scoring their first points from a quick tap after being awarded a penalty. The successful conversion by experienced flyhalf Curwin Bosch, saw them enter the break 35-7 down.

The visitors’ built on this on the stroke of the fourth quarter with Marius Louw (replacement centre) ripping the ball from an opposition player’s arm to make his way over the tryline, and Daniel Jooste (replacement hooker) scored their third try from a pick-and-go.

The 2019 World Rugby U20 Championship breakthrough player of the year nominee, Jaden Hendrikse (replacement scrumhalf) also added his name to the list with a pick-and-go from a breakdown.

The Vodacom Bulls, in turn, added two tries to their tally in the second half, both compliments of Kriel - despite losing Juandré Kruger to a yellow card – which saw them earn the rewarding 49-28 victory.

Sean Everitt said the Cell C Sharks were preparing for a physical onslaught from the Vodacom Bulls in Saturday’s Carling...